It didn’t dawn on me that it was Friday the 13th until it was too late.

With the way things in my life are going, I would have stayed at my middle of nowhere family compound had I realized that it was the infamous day of bad luck. But I had a full day booked in Austin, so off I went, fingers crossed. It began well- new hairstylist worked out (phew!), closed a bank account and transported a sizable sum of cash to my new bank without getting robbed, shopping therapy (money can’t buy happiness, but I sure keep trying lately!), and a yummy healthy dinner at an Asian fusion restaurant around the corner from Emo’s with a new friend who is going through a similar family tragedy right now. As we discussed how angry at life we are, we noticed this picture hanging across from our table: 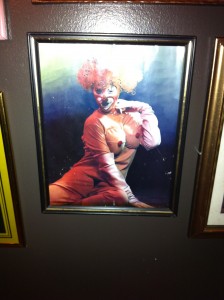 Pretty much everything about that picture creeps me out.

Then it was time to go to Emo’s, and when we went to check in at the guestlist, I got hit with the ‘you’re not on the list’ line. Even though I had been asked to review the show and confirmed, somehow something got messed up. I showed the email on my phone to the door guy, but unlike in SF where the venue people recognized me and would generally let me in, I got shooed away. But since I drove an hour and a half for this, and had a guest in tow, I went ahead and paid our way in. 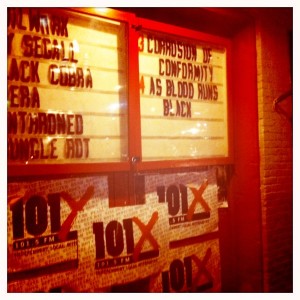 We caught the tail end of the Southern metal local trio Dixie Witch. As they wrapped up their set with the drummer jumping on top of his drums, I surveyed the scene. My body is still getting used to the heat…there’s a 40 degree differential between SF and Austin. 40 degrees! I haven’t learned yet how to dress for shows here…so I was bathed in sweat in pants, boots and my Orchid t-shirt. So between sets you can generally find me at the inside bar….I’ll have a shot of Jack and a shot of A/C…thanks!

I was worried we had missed Iron Age, which is one of my favorite newer bands. I’ve seen them a couple times before, but it felt different this time as a Texas resident again. It’s always good to have local bands that you know will bring it every time. I guess it’s like how some people feel about their city’s sports teams. Iron Age have a great energy about them; their hardcore meets thrash meets doom with a speck of Southern dishospitality creates a unique sound. My only complaint about them is, while completely capable, their lead guitarist just does not look like he fits in with the rest of the band. He’s so clean cut…..at least put a bandana on his head or something! Anyway, they open and close with their best tracks: ‘The Sleeping Eye of the Watcher’ and ‘Dispossessed’…like a perfect metal sandwich. 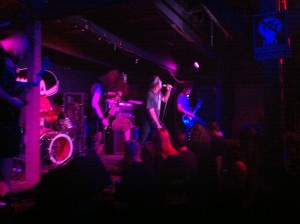 Righteous Fool was not for me. After a short break where they swapped guitarists, I moved in a bit and for the next hour watched mosh pit mayhem in a cloud of weed smoke bathed in sweat. Sweaty mosh pits just look rougher, and I forgot that standing near the perimeter put me in a splash zone of sorts. I’m ok with getting pushed on accident now and then, but when it’s by a dude who transfers sweat on you going in and out of the pit…..ewww. Despite a sign warning against moshing and crowd surfing and stage diving, punks of all ages sporting shirts ranging from Motorhead to Enslaved to denim vests with CoC and Pantera patches pushed, slammed and dove their way through the set. CoC played a fairly straightforward set, each member in their own zone, looking as happy to be playing their reunion set to the medium sized Emo’s crowd as the larger draws they may have had back in the day. 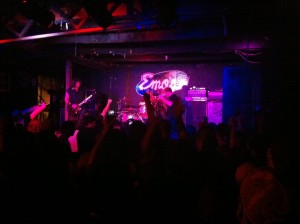 By the end of the evening, I started to feel a little more at home in Austin again, even if I am getting the same comment I get at metal shows I’ve been to all over the place: ‘you don’t look like you fit in here’. I take that as a compliment.