15 years ago, at age 15, I went to my first rock show sans parental supervision at Sunken Garden in San Antonio. It was to see Bush, The Toadies, and Hum. I remember waiting in line to get in and feeling like the youngest person there. I recall how people were dressed – frayed flannel shirts still dominated the maturing grunge fashion sense. I saw someone get busted for smoking weed and they took off and ran from the cops through the field. But most of all I remember that feeling when I saw Gavin Rossdale step out on stage. My naive ass decided I wanted to get closer, so I walked into the mosh pit, was promptly knocked to the ground, but luckily quickly lifted up by two guys. And thus began my quest for the closest non mosh pit spot, where I could drool over Gavin as I rocked out to ‘Machinehead’. I pretty much have never intentionally set foot in a mosh pit since.

The unique evening began as we pulled into the parking garage. The girls taking the money told us that my car smelled nice. “All of these boys’ cars stink!”. Ok…..as we approached the theater entrance, I started to remember things like a dream, especially the narrow walkway that was littered with bottles from people who had been waiting to get in. After a quick check in at will call where we picked up our VIP passes, we set off on our backstage adventures. 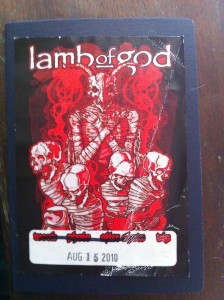 Due to conflicting posted start times, we missed 3 Inches of Blood, which really bummed me out. I had just seen all of the bands at Mayhem in San Francisco right before moving back to Texas. The final Mayhem show was the night before in OKC, so this would be a one off show. I thought it was interesting that this show would occur in San Antonio- a city where none of the bands are from- for what I would later find out would be Lamb of God’s final U.S. show for about 2 years.

We went in search of beer while Hatebreed set up. You have to buy tickets to then turn around and use for beverages- a system which I hate. But luckily the lines weren’t too bad, and a mere minutes later we were sipping a cold beverage while the guitarists for Hatebreed played their first notes as they breezed past us to walk onto the stage. I’m telling my friend about how Jamey Jasta does this cheerleader kick thing, so we’re giggling as we watch for that when this bee starts to dive bomb us. So I’m squealing and jumping around trying to get away from the bee when Randy Blythe walks up in front of us to watch the set. I elbow my friend in a fangirl moment, as the one Hatebreed song I dig comes on, ‘In Ashes They Shall Reap‘. It was cool to see that he was out watching most of the sets, even after having been on tour with these guys for the past month, rather than hiding out on the bus like many rock stars do. 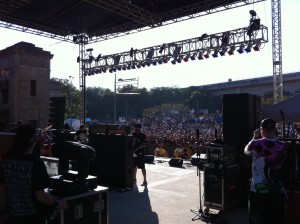 While Hatebreed had taken a moment to thank the Armed Forces, it wasn’t until the Five Finger Death Punch set that I fully realized how in SF, bands rarely ever do anything like that. As Ivan Moody maneuvered the stage in his army vest and ‘America, Fuck Yeah’ attitude, I thought about how I’ve lost a few high school classmates in the war. Living in SF was like living in a foreign, anti-America country at times. So as I gazed out at the crowd, I thought about how many people in the crowd may have spent time in the war, and how this was a special night out for them. Apparently 5FDP had been fined the night before in OKC for swearing on stage and inciting a riot…what??? Remind me to never go to a show in OKC. At one point, Ivan had as many kids as he could find backstage and in the crowd come up on stage…and there were quite a few of them. While one little girl cried in her mom’s arms the whole time, the little boys puffed up their chests in pure excitement. Ivan walked off stage and took a sip of water and looked at Blythe, shrugged his shoulders, and said, “I love babies!”. Metal dudes….you think they are all tough and stuff but really they are mostly a bunch of nice, surprisingly shy guys. At one point, Blythe walked up to the soundboard in front of us, pretended like he was going to mess up all the switches, and turned around and gave us a devilish grin. I giggled for a long time about that. 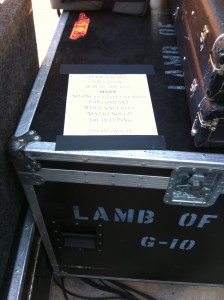 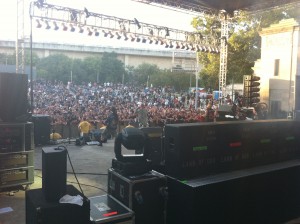 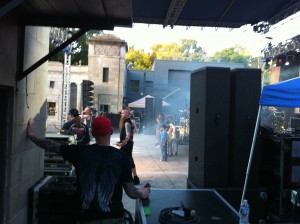 For Lamb of God, we were told we had to go out front, but we found the perfect spot to watch people get massacred in the pit while still having a nice unobstructed view of the stage. As we perched, a girl next to us leaned over and asked my friend, “are you with the band?” This always makes me laugh. NO, I AM NOT WITH THE BAND!

After seeing LoG open for Metallica and on Mayhem, it was nice to see them play a full set. Earlier this year I was gunning for them to win the Metal GRAMMY in my writing as the Rock blogger for the awards show. They are a great live band- they aren’t showy at all, but create an engaging performance resting solely on astute musicianship, amazing energy and heavy, complex music. One of my favorite LoG songs, ‘Now You’ve Got Something to Die For’ came early in the set. While backstage we had watched Will Adler warm up while watching 5FDP, fingers moving at light speed. The other guitarist looked really familiar, but I didn’t realize until later that it was one of Between the Buried in Me’s guitarists filling in. Earlier this year I got punched in the face while watching them….not my favorite band. But I remember this particular guitarist being the only thing I liked about them. 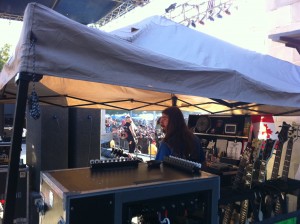 At one point Blythe talked about how the last time they played in San Antonio, they had hung out with Dimebag Darrell, and the obligatory ‘Walk’ chords raged through the speakers. OK, so I know that’s kinda cliche or whatever, but I would have enjoyed the full song on this particular evening. It was, however, followed by ‘Redneck’. I was surprised that I hadn’t seen any bad pit injuries, when a girl teetered out of the crowd and collapsed. Later on as we were leaving, we saw her on a stretcher awaiting an ambulance. Yikes! The set ended at an early 10PM…leaving me wondering where the end of the tour party was, but one last meandering around backstage revealed a bunch of tired crew members ready to go home. 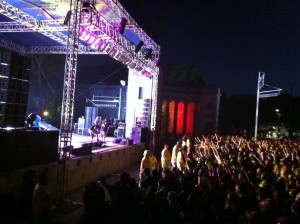 As we left Sunken Garden, I thought about how cool it was that 15 years later, live music is still my #1 passion. I hope it stays that way forever.