I’ve always been fascinated with the concept of time.

Not in a mathematical, scientific sense. Oh no, that would be far too cerebral for me. Just in terms of life and how we perceive it. Past, present, and future and the different ways we think about things when they lie behind or in front of us as compared to when they were actually happening. Continuity, synchronicity, serendipity, opportunity….all things that have to do with time. It’s why I’m a huge David Lynch fan, love movies like The Curious Case of Benjamin Button and Vanilla Sky, and have always run my life in a ‘burn the candle at both ends’ fashion. With every second, a new chance.

Until now. Have you ever watched someone die day by day? To put it lightly, it’s a fucked up experience that no one could ever convey with words.* I’m stranded somewhere between wanting someone to hold on, and wanting them to move on and be out of pain. Luckily I stay numb to it all. People who’ve seen me lately comment, ‘you’re handling this so well’. But the truth is, I’m…not…there.

It was my first time to leave The Compound in 5 days. Speeding down the highway, loud music in my ears and looking like my old self, I decided that for the six hours I would be away, I would pretend that I’m in a movie. Because that’s the only way I would be able to enjoy myself.

And that’s exactly what I did, and it worked.

In spite of everything, I was excited about seeing Sleep. Holy Mountain is a great album. I’ve seen High on Fire quite a bit, and I was interested to see Matt Pike play in the band that preceded it. I was ready for something heavy and loud, and though I never saw them the first time around, I’m pretty sure they’re going to deliver. 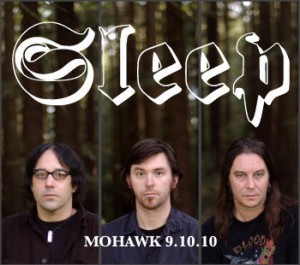 The show was sold out. It was my first time at the Mohawk, and I was by myself. Upon entering, I scoped out the place- a smaller, grittier version of Stubb’s with more deck space to watch the band from an elevated area. 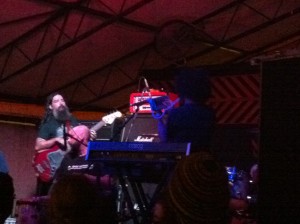 Sub Oslo was on stage, and their sound is psychedelic/reggae/dub, which seemed odd, but I guess that fits with stoner metal. Someone lights an incense stick and puts it in the cactus plant next to me. Ok. Then someone faints behind me. I’m looking at the melodica thinking that it has to be one of the weirdest instruments ever created. I get a bit bored so I go for drink two. I play name that local band boy while I watch other guys look at me, contemplate talking to me, and pick up on my ‘don’t fucking talk to me’ energy and wuss out.

Back downstairs in anticipation of the main set, I’m fiddling with my phone when this shirtless dude pushes past me. Just when I’m thinking, ‘who’s this drunk guy?’ I look up and see the back tattoos and realize that it’s Matt Pike. He gets someone in the front row to help him hoist himself onstage. Is that really the only way on stage here? No, but apparently that’s his way. And it was just a totally fitting little moment of character to kick off the set. I’ve seen him around off the stage when I followed around the Mastodon/Dethklok tour, and at several shows in SF….and that guy has a lot of character.

When the lights went down, the crowd became encapsulated in reefer madness as the syrupy sounds of the intro to Dopesmoker filled the rest of the air. Chug, chug, chug….everything is vibrating. It’s immediately apparent that this is where Matt Pike belongs….free of vocal duties, he is an extremely engaging guitarist. In comparison to the slow roasting doom tinged chords, he is electrified. I would even go as far as saying he seemed very sexual; something extremely hard to type about a guy who, to be honest, looks like he’s about four months along. This never came across when watching HoF, and is surely a result of a different kind of relationship with this music and this band. 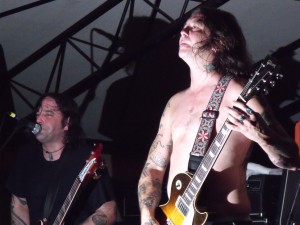 ‘Holy Mountain’ into ‘Dragonaut’ just blew me away. And for those two songs, I wasn’t acting; I was able to feel something. Not anything deep or revelatory, but something very basic- I was enjoying watching artists take pleasure in doing what they love on stage, and people in the crowd enjoy their Friday night out, and the songs simply sounded good. I’ve become fascinated with the ordinary, and once I experience the ordinary again, I don’t think I’ll ever take it for granted.

For the rest of the set, I kinda went somewhere else. I got lost in the Ozzy-like vocals of Al Cisneros, watching his intent gaze as he bobbed his head along with the riffs. While I couldn’t see Jason Roeder at all times, when I could, his drumming style seemed unique- a mixture of holding back and letting loose at just the right time.

Time passed in a bizarre stunted manner, due in part to the music as it phased from one tempo to the next, from groove to doom; partially as I mentally went in and out of focus from the show in front of me to that place where my mind likes to go to hide from it all. I lost track of songs and I didn’t mind.

For the encore, an expected cover of Ozzy’s ‘Over the Mountain’, Sleep-ified by slowing it down and making it more evil sounding. The last two songs were a sweat soaked blur of distortion.

As I drove back to The Compound, I continued the waking dream that keeps me going lately….planning my own version of Eat, Pray, Love. Which has proven tricky, because I don’t eat much, I for damn sure do not pray, and love always tears me apart.

*I’m not looking for sympathy….I write this because it’s therapeutic for me. Apologies to Sleep and Sub Oslo for the downer piece in their name…