I was driving down 7th street, thinking how oddly quiet it seemed out tonight, full on tacos from Guero’s. I turned the corner onto Red River, looking for parking, when I spy Ol Drake lifting weights by the band’s trailer and screech to a stop and honk. He looks startled as I roll down the window and wave, and after I parked I realized that I could have caused him to drop those weights on his feet….which could have been really bad and totally fitting with their luck of this tour.

The Evile crew was hungry, so I directed them to Casino El Camino for burgers and Lone Star Beer. I used to come quite a bit in college- it’s distinctly Austin: country punk in vibe, often with Bettie Page movies on one screen and football games on the other (though there was some really bad horror film on this evening). The place is supposedly haunted. It was funny to watch them get wide eyed at the size of their burgers. 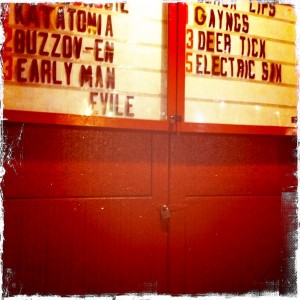 Over at Emo’s, I’d been tipped off that locals Lions of Tsavo were not to be missed. It was nice to hear some black metal again…yes, I said ‘nice’ and ‘black metal’ in the same sentence. The mood of the music fit the mood that I keep trying to throw dirt over in my brain. I would never have picked these guys out of a lineup of potential black metal musicians, though. I was consumed by 90% of the set, except for this one song that had these drum fills that just sounded out of place and like they were mistakes in the music. 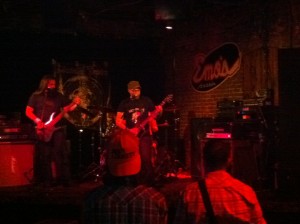 As the set finished, I turned around to see my friend’s fist moving towards this guy’s face- and as I prepared help her right whatever wrong this guy had done to her, they started laughing and I realized it was a joke….but then this guy started being ‘creepy drunk guy’ and we had to become moving targets, scurrying away from him the rest of the evening. That was just the beginning of a rather substantial cast of characters that seemed to fill Emo’s this evening….there was ‘stand in front of you and stare and wave guy’….and ‘over-exuberant Early Man fan who gushed to me and I didn’t have the heart to tell him that their set was going to be really short’….and ‘Eighties dress girl who constantly looks back at boyfriend for approval of her dancing’…but the best one really showed himself during Evile’s set.

I half watched Bonded By Blood again while I tried to figure out what was making everything seem so weird this evening. It’s the first cool front of the year, so perhaps instead of getting out and enjoying the 60s temperature evening of real metal some people stayed in and wore fleeces and watched Metalocalypse (which I am doing tonight, thankyouverymuch).

As Evile‘s set begins, I noticed that this little man who looked really out of place and also half attempted to hit on my friend earlier was now front and center like their biggest fan on the planet. I mean this guy is wild-eyed, shadow punching and thrashing about like he is having the time of his life. I’m standing there pondering how all of these people got here, why they are behaving so strangely, wincing as a sound issue with the kick drum starts to crop up and then gets resolved, but mostly I was laughing at Evile’s new biggest fan practically lay on top of the stage as the set races by. They were laughing, too. My favorite this evening was the fist pumping ‘Now Demolition’. And then, too quickly, it seemed, they were playing ‘Enter the Grave’ and the set was over. 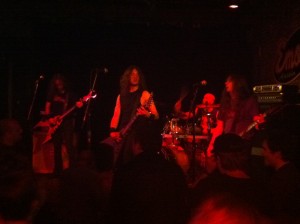 Afterward, I told Ol I felt like I needed to apologize on behalf of Austin for the crowd they experienced this evening, but explained that Austin’s motto is ‘Keep Austin Weird‘, which was met with an expression of both confusion and agreement.

“So….we’re havin’ some band issues” Mike Conte, vocalist for Early Man, explains after a couple of loose songs were played. Last time I tried to see this band, Mike was sick and they didn’t play on the bill. They did their best with what they had- Lions of Tsavo vocalist/guitarist filling in on bass after playing with them for only a few hours earlier that day (apparently he and Mike are old friends), and a drummer who is merely a few days old. They sounded better when they reached the end of their 20 minute set, ‘Someone Else’s Nightmare’ into ‘Death Potion’, where the crowd decided to finally start the first mosh pit of the evening, and several of the aforementioned characters became victims lying on the floor. 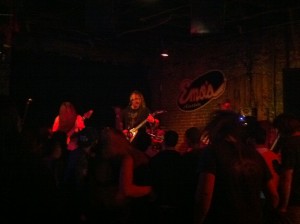 Afterward, I said farewell to Evile, wishing them luck as they thrash across North America…which is when I learned that the band had given me a nickname when they couldn’t remember my real name after I interviewed them. Something tells me I’m a little less cool now that my real job isn’t in videogames anymore….. 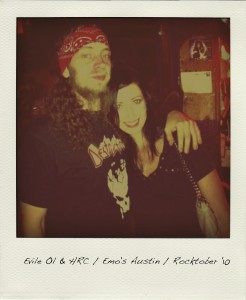 Over the past few months, when I’d come back to The Compound in the middle of the night, turning onto the dead end cemetery road my family lives on, headlights ominously illuminating this sign, I’d shudder. Now I see it as a challenge. 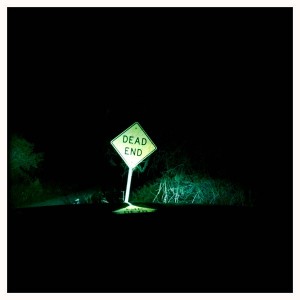