I’ve often joked that if I were to write a memoir of my rock ‘n roll adventures, it would be entitled ‘I’m Not With The Band’.

I read Pamela Des Barres’ ‘I’m With The Band‘ long ago. Like many other girls, I drooled over her stories and turned green with envy….mostly over the fact that Miss Pamela was born, in my opinion, at the absolute perfect time, in the right place, with the right attitude. She caught a bit of Elvis, then onto Beatlemania, then Hendrix, Zeppelin, The Doors, and so on. I’m not gonna lie, I find the sexcapades titillating…I mean Jimmy Page and Jim Morrison? I’m not asexual here. But to me, Pamela Des Barres represents so many other things besides her most often prescribed label of groupie: she was a fan, she was part of a movement, she inspired the music, and, most importantly to me, she took her experiences and wrote about them.

The word ‘groupie’ has been flung in my direction a lot over the past few years. People read my sometimes gushy, girly posts, spy a backstage pass, see a picture, whatever, and voila, I’m a groupie. If, when saying that, people meant passionate fan, or someone who follows a band around, then they would be correct. But when people say ‘groupie’, generally they are implying some sort of physical activity.

“Are you with someone in the band?” It all comes down to this: I’m really not that cool. I can barely even date ‘normal’ guys. The only reason I’m backstage is because I’m writing a review, taking pictures, have a friend in the band or crew, paid for a VIP ticket, or I snuck back there. So the question is, would people ever want to read about a girl’s adventures seeing bands that didn’t involve sex?

My site is small, but it seems that people connect with the way I write about my life and how it intertwines with the bands I’m seeing. When I started my site, there was much less ‘me’ in the pieces. Now, I can’t keep ‘me’ out of them. Over the past year and a half, my readers have been exposed to stories from my youth, my issues with love, turning 30, and losing my mom to cancer by virtue of band reviews.

I’ve had my eye on Pamela’s writing workshops for a while, but she never taught one in San Francisco. So when I learned that there would be one in Austin, I figured it would be good for me. A mere three weeks after my mother’s passing, writing is my therapy of choice, and thus the timing seemed perfect.

I really had no idea what to expect from the experience. I was told a time and address, and to bring an example of my writing to read aloud. I had never read any of my HRC work to anyone….this had me rather nervous. After much thought, I chose to read the first part of my Sleep piece, the last thing I wrote before my mom died.

The first night was at the home of the fabulous Roggie, who books tons of musicians. Of course I was the first to arrive (see- I’m not cool). Miss Pamela greeted me warmly and we talked about my site for a bit, finding out that we have a mutual affection for Chris Cornell. We were soon joined by a dozen other ladies…all but one who had taken the class almost every time it had come to town for the past 5 or so years (see- I’m a n00b, not cool). Introductions revealed that we were a vastly different group of women in terms of age, occupation, writing experience, and marriage/motherhood…..but the workshop itself would come to show that we had some eerie similarities. 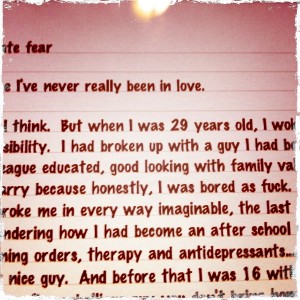 After getting through reading the piece I brought, we worked through several writing assignments. Topics were stated by Miss Pamela and we were given a time limit- 12 minutes for one, 3 minutes for the other. Everyone scribbled on their pads while I tapped away at my iPad (see- NERD- not cool!). Reading these pieces aloud revealed a strong theme of lost mothers and cancer…something that was almost too soon for me to experience…but great for me in the long term I’m sure. It was amazing how quickly I could get a sense for this group of women and bond with them through our writing/baring of our souls. It was much like a therapy session- it felt good to get it out but kind of bad as well, as I saw the looks on their faces when I finished reading my off the cuff drivel regarding my love/hate relationship with love, sadness for my mom, and insecurities with myself and my future.

The second night was hosted by sweet Dianne, who writes the newsletter for the Continental Club, and is working on a book on the club’s history. Feeling much more comfortable with the group now that they knew some of my issues and accepted me back for a second night, I felt a bit more confident in my writing. This evening’s exercises involved some fiction…..something I hadn’t done in years. Even then I couldn’t get ‘me’ completely out of the picture. Maybe I’m a narcissist. The evening wrapped up with a homework assignment that I completed Sunday evening: write down 10 intentions for the next 2 weeks on 10/10/10. It felt good to do something that I normally only do in late December now, when I’m about to embark on a soul searching period of my life for an indefinite amount of time. 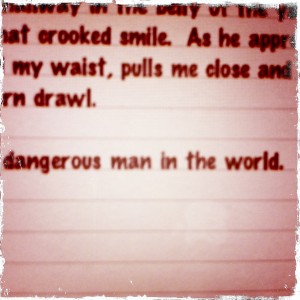 Reflecting on the workshop during my drive home, I thought about how it’s a bit bizarre that I spent the past two evenings divulging my deep, dark insecurities in front of someone who’s been such an inspiration to me. But I walked away from it with the feeling that the full significance of it may not be felt until some time in the future. I made new friends, got things off my chest, and have a new found confidence and inspiration in my writing. As Miss Pamela says, I’ve freed my muse.

And the timing couldn’t be better…because the next two months will be spent jet setting around the U.S. seeing some of my favorite bands.

Maybe one day, my silly little blog will become a book. And when that time comes, I do have some stories that I’ve never shared………

Sign up for one of Miss Pamela’s workshops here.