“Drivin’ faster in my car…”

My friend comments on how quickly we made it to Corpus…and I let her know we were going about 90 the whole way. I’ve had about three hours of sleep, and I have a lot on my mind. I love to drive fast when I’m thinking things through.

“Falling farther from just what we are…”

It’s bizarre that we have to travel out here for shows to begin with, but even more strange that the two shows we’d planned to do this for ended up being on the same weekend since this STP show was rescheduled after Weiland’s rant in Houston. Apparently it’s just alcohol this time around…

“Smoke a cigarette and lie some more…these conversations kill…falling faster in my car.”

I valet my car at the hotel and go to check in, when I’m informed I’m at the wrong hotel. There’s another one down the street. I start to whine and end up with an upgraded beachfront room in this nicer hotel….score!

“Time to take her home…her dizzy head is conscience laden.”

A quick change from road clothes to show clothes and we’re walking down the street to the venue. Doors are already open but it’s still very empty in there…the reschedule surely affected attendance of this show. My friend politely asks a guy if we can squeeze in on the rail, and he lets us!

“Time to take a ride…it leaves today no conversation”

The stage at this venue is insanely high. I do the rail thing mainly for safety reasons and taking pictures, but knew immediately this was going to cause some obstruction in our view. But regardless, we waited for the music to start and buzzed about our favorite band of the evening, who my friend had just driven to Arkansas to see, while spying their equipment emblazoned with BRMC sitting on the side of the stage.

“Time to take her home…”

TAB the band features the spawn of Joe Perry on guitar and vocals/bass, a Justin Bieber lookalike on guitar (“he looks like ME!”) and a drummer who makes pretty epic faces. I thought they were enjoyable, but their songs didn’t really stand out a lot to me. One that they played had apparently been featured as a snippet on Entourage, which they made a big deal about in a rather humorous way. 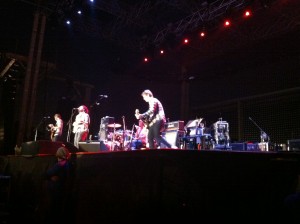 “Her dizzy head is conscience laden…”

Black Rebel Motorcycle Club is one of those bands that has incited stalker-esque behavior in me over the years. It was hard not to blame Weiland for forcing them to cancel their headlining San Antonio show and reschedule their Dallas show on a day that conflicted with our other plans. Because when you see a band you’ve seen play 2+ hour sets in small clubs play a 30 minute set on a huge stage….it becomes somehow more unsatisfying than having not seen them at all. Theme of the year for me: my happy moments are so fleeting I don’t have time to settle in and enjoy it. Regardless, I watched the guys up there playing with the same small club vibe, not pandering to the crowd yet still causing people around me to whisper, “these guys are GOOD!” The set consisted of their more upbeat, shorter songs, while I prefer their darker, longer, sadder pieces…but I promise I’m not complaining. It was great to see them again. And I’m doing so again on Friday…but I’ll probably be in costume so they won’t recognize me as that crazy stalker girl. 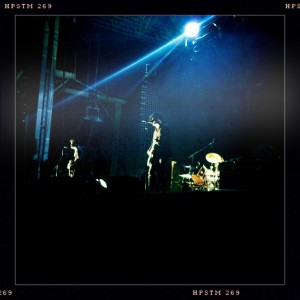 Will he be sober? It’s a valid question. As is the idea that we might not want him to be, because that’s entertaining to an extent, though we know it’s not healthy. Having seen Weiland several times in STP, with Velvet Revolver (including one of their last shows before they broke up where he was very fucked up), and solo….I’ve seen him in several states but would still list him as one of the more engaging front men around that doesn’t play an instrument.

‘Crackerman’->’Wicked Garden’->’Vasoline’…it’s greatest hits from HRC’s formative years time. Weiland is slithering back and forth along the stage, while Dean DeLeo demonstrates his master slide guitar skills, Robert DeLeo proves he’s one of the oddest (in a charming way) bass players around, and Eric Kretz reminds me that there is no reason for me to keep forgetting his name. The crowd is going bonkers…the people behind us had already been in one altercation and a group of girls, who were asked by a photographer to show their boobs earlier, were screaming about their love for Scott loudly. The damp ocean breeze was blowing on me from the front, as I got a contact high from the people behind me. Things were being thrown on stage- most likely out of excitement- beer, glowsticks, shirts, fliers from the venue…Weiland says something about the economy being bad, so we might not want to throw our expensive beer and souvenirs. 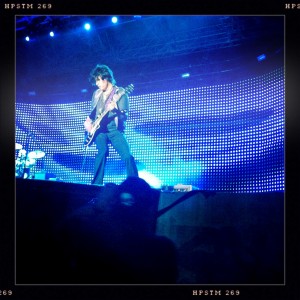 “Too much walkin’, shoes worn thin…”

I notice that my feet hurt. I start thinking about last night, tomorrow night. This should not be happening….I realize that somewhere during the set, STP lost me.

“Too much trippin’ and my soul’s worn thin…”

‘Big Empty’ and then a decent cover of Zeppelin’s ‘Dancing Days’ and onto ‘Silvergun Superman’ and ‘Plush’ had me back. A random crowd surfer crashes over us unexpectedly. I notice how Dean’s guitar strap has places in it for his slides, like a shotgun belt. He starts throwing them into the crowd when he’s done with a song. Everyone’s singing along. 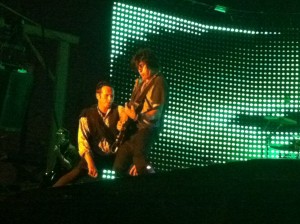 I believe it was during ‘Huckleberry Crumble’ that Weiland stopped the song in the middle due to what must have been a really bad fight in the crowd. “I saw what you did,” he states. Apparently someone threw a beer, it landed on some girl, and I’m guessing that her manfriend and the beer-thrower came to blows. It was that kind of crowd. 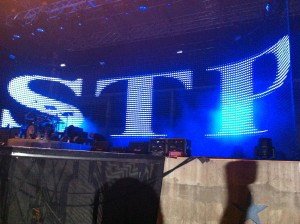 “It leaves today, her name is what it means…”

After picking up where they left off and finishing the song, Weiland whispered something to the guys, Robert lifted his finger indicating one more song, and they finished with ‘Down’. Afterwards, Weiland shook his head as he walked off so I thought they were done…but they did come back and finish with a two song encore of ‘Dead and Bloated’ and ‘Trippin’ On A Hole In A Paper Heart’.

‘Too much walkin’, shoe’s worn thin…”

I wasn’t alone in my feelings that this set was weird. There was just a strange vibe about it that I can’t successfully pinpoint into words. Perhaps it was in comparison to the last time I saw them being so great, or my headspace from the night before, or the stage being neck crampingly high. Either way, I get a redo on Friday in LA.