“Are you guys going to Rob Zombie?” they shout from the car. Is it that obvious? I look down at my snakeskin boots and answer in the affirmative. “Where is the venue?” We quickly give directions since we were there already last night.

5 minutes later: “Hey- you’re going to the show, right?!” another car stops and yells. “Are we allowed to take in cameras?” Really? Do we have an ‘Information’ sign posted on our asses somewhere? Don’t they know I’m nervous and rushing to an interview?!?!?!

*Ping* Text from the Murderdolls tour manager. Oh boy…the interview is going to be on the tour bus. There’s just something awkward about bus interviews….lighting, invasion of personal space, other people watching you conduct the interview waiting for you to fuck up. We’re marched along a long line of buses and told to wait outside until Wednesday 13 is ready. Unfortunately, Joey Jordison won’t be in on the interview because- “no offense” – he only does the bigger outlets. No offense taken….

You can watch the interview here. 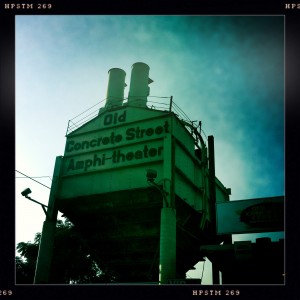 Afterward, we had an hour to kill so we just decided to sit in the sizable line and people watch. There were costumes- several inspired from Zombie’s films, others Alice Cooper related, and then there was a cow. But the thing that…um…stuck out most was this tiny girl with ginormous fake boobs. I don’t know how she stood up straight! I mean, her shirt couldn’t even contain them..there was areola showing. And this would be one of many I would see over the course of the evening…

Once inside, we decided to stand on the left side, and for some reason the view was better than the night before. With the crowd growing behind us, the crew on stage start throwing out picks for about 10 minutes- John 5, Murderdolls, even Lamb of God for some reason. Of course I only got one Murderdolls one because I can never catch anything!

Murderdolls came on promptly at 6:55, and they are a band that is a definite misfit for sunshine. Joey came out with a blond Lady Gaga wig on- his Halloween costume I presume. As they started playing and moving around, there was a nice effect of the powder in their hair blowing off in the wind. After their first song, Joey walked to the side of the stage where two ladies stood, who helped him take his wig off and put powder in his hair. It was really funny how he had these assistants…later they would help him remove his jacket. It was also strange to watch him play guitar….if I were his drummer I would be nervous. Murderdolls use a lot of crowd participation tactics, which I don’t really get into, but it seemed to warm the growing crowd up. ‘My Dark Place Alone’ is my favorite Murderdolls song, so it was good to hear that…but they really turn on with their final song, and Wednesday 13’s favorite, ‘I Love to Say Fuck’. Because who doesn’t, really? The last time I heard that song live was in a tiny basement club in Berkeley. 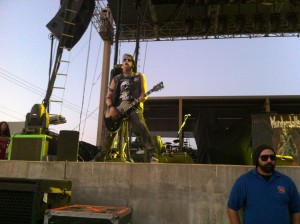 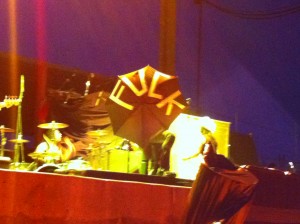 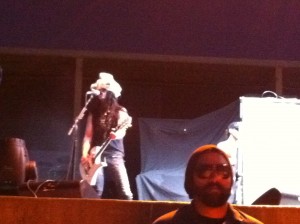 I had been eying the various crates onstage with things like ‘Snake’ stenciled on them, getting excited for Alice Cooper. The last and only time I had seen him before I was pretty far away. It was a magnificent set on many levels. Not only was Alice great, but the band made such an impression on us that we wanted to look up all of their names immediately (Kerri Kelli and Damon Johnson on guitar, Chuck Garric on bass, and Jimmy Degrasso- who’s apparently from Corpus- on drums). 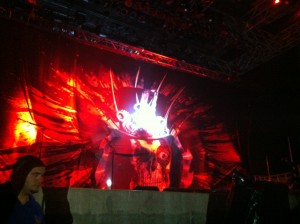 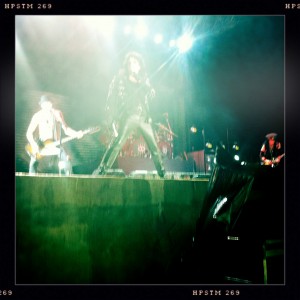 Seeing the originator of this kind of stage performance still enthrall a crowd is nothing short of spectacular. And Alice doesn’t hide behind the antics, either….he’s at the front of the stage pointing at me telling me I’m Poison running through his veins, to Feed his Frankenstein. He’s throwing his canes into the crowd, making us beg for plastic diamond necklaces, throwing candy to us out of plastic pumpkins.

To set the mood, the full moon was rising perfectly in my view of the stage. There were a lot of guitar and drum solos to fill time when Alice was off stage between executions, but I didn’t mind at all. He even made the band introductions funny- when he went to introduce himself, he just said “ME!” over and over again while miming the different executions he’s undergone. 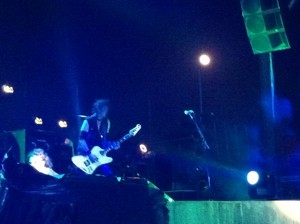 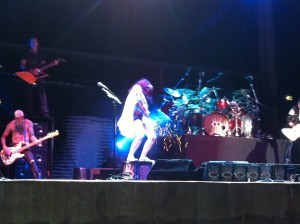 Even with the long set, I still wanted more…which I thought I was going to get…

Something looked funky when the crew went to set up Rob Zombie’s stage. A curtain went up, then down. Another backdrop went up, then down. Then there’s a simple black curtain held up so Zombie can ‘sneak’ into the setpiece he emerges from in the beginning. We spied a gaggle of scantily clad women on the sidestage platform and wondered where they came from. 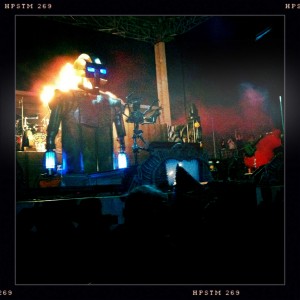 Sure enough, after ‘Jesus Frankenstein’, Zombie starts pacing the stage like I’ve seen him do when he’s pissed about the setup. He starts talking about how every time they play here the wind fucks everything up, so they decided to scrap everything and give us “a down and dirty rock show”. And they did.

Onto ‘More Human Than Human’, and I notice that those girls are gone from the platform. The song comes to a close, and suddenly the girls run out on stage topless, slinging boobies everywhere as ‘security’ comes and hauls them off back to the platform, where they remain in various stages of clothing for the rest of the evening, one-uping each other with their stripper moves. I imagine the best strip club in town was having a sad evening….

You can catch it at about the 2 minute mark here:

They brought out witch hats for the crowd. We each got one, but it’s a bit difficult to wear when thousands of people are pushing against you from one direction as the wind tries to get you from the other. Regardless, we continued to rock out as Piggy D and John 5 run back and forth across the stage, and Rob jumps down and walks the rail.

This being the fifth time I’ve seen Zombie since Halloween last year, I was surprised at how much more this set leaned on new material. It felt really short, as there were a lot of breaks between songs as they seemed to be trying to figure out what to do since the setup wasn’t ideal. I continued to get distracted by the girls on the platform, which was made even more entertaining because this normal couple was standing in the corner, the man’s arms wrapped around his conservatively dressed woman, as they both looked a little freaked out by what was going on around them. 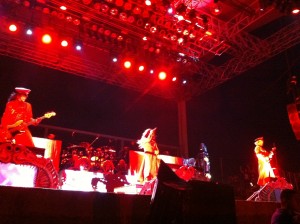 As the parade of robots and monsters came to an end, the band left the stage, only to quickly return to say that the venue was saying they were over curfew. They would be fined $3K a minute, but would be ok with that if we wanted them to continue, to which the crowd cheered. The ‘venue security’ were on the stage…but they looked awfully familiar to me as the setup crew…so I thought it was just a gimmick. They finished up with ‘Lords of Salem’ and the band showered us with tons of candy. Then they started to hug each other since this was their final show for the year. I thought it was odd considering the encore that was supposed to happen….

“If you haven’t heard yet, tonight’s show in Corpus Christi is the last stop of the Zombie/Cooper Halloween Hootenanny Tour. And to celebrate, for the first time EVER, Rob Zombie & Alice Cooper will take the stage TOGETHER for a history-making encore!

Murderdolls open up the show at 6:55PM, so make sure to get here early to see them! And you DEFINITELY want to make sure to stick around for the end of the show to be part of history!”

Well, we were asked to leave as soon as the band left the stage. So…history didn’t happen that night. I was pretty excited to see what they were going to do. I guess we’ll never know…until they tour again…