Ohhhhhhhh
So high, and then I fell
Ohhhhhhhh
Can’t stop the ringing of my funeral bell”

As soon as I hit the Austin city limits, it began to rain. It was also the first real cold snap of the year, so thinking about attending an outdoor show made me want to turn around and crawl back into bed. “In the cold November rain…”

But I kept going. 24 hours earlier, I had returned from LA. I’ve been living out of a suitcase for the past three weeks, and there’s still more to come. Keeping busy is the only thing that keeps me from falling…I think. I don’t even know anymore.

The rain stopped as I parked my car. I shivered as I walked towards the venue, even under the Death Magnetic hoodie that I finally was able to wear since being gifted it before leaving SF. I could hear the melodic elements of Children of Bodom already on stage at the early time of 7pm.

At will call, I was surprised when I was handed a VIP wristband. Now I wouldn’t have to worry about the rain! And, even better, I could avoid the crowd, which scared me when I last saw BLS at The Fillmore. You have no idea how excited I was to be able to sip my Jack & Coke in peace on the balcony.

I only made it in time to see 2.5 CoB songs as their set ended much earlier than I anticipated. It was basically just enough time to remember that CoB is slightly outside the realm of metal I enjoy, and that Alexi and I were wearing the same fingernail polish. 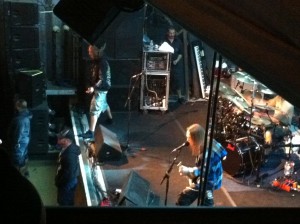 In between sets they played Mastodon’s Crack the Skye.

I can remember the first time I heard Clutch…and how long it took me to find out that it was Clutch that played the song that became an obsession for me and my friends for at least a couple of months in the mid-nineties. Pre-internet lyrics googling, pre-Shazam….you listened to this thing called terrestrial radio, and if you didn’t catch the DJ saying what the song was, you were SOL. Well, I remember it being like a game trying to figure out who the fuck sang this wicked song that we kept hearing, as we yelled “JESUS ON THE DASHBOARD!!!”. It took weeks for us to learn it was this band called Clutch, and then it was a 30 minute drive to the record store to pick up the album. Now, I know that ‘Spacegrass‘ is to Clutch what ‘Closer’ is to NIN…completely unrepresentative of their body of work. But I still dig that song, man….it just takes me back.

Clutch, in reality, is a lot more funky sounding. When the drummer sat down and I saw he was wearing a The Sword shirt, I gasped. Vocalist Neil Fallon is the most dynamic performer in this band; glaring at the crowd as they sing every lyric to every song back at him. Guitarist Tim Sult is basically shoegaze, he never looks up and even acknowledges the crowd. In a prime crowd viewing position, my focus often went to the audience. Clutch seemed to have owned most of the female fans that evening, and I saw many of them fighting off the unruly guys to stay close to their band. Clutch’s music possesses this feeling of bottled aggression that gives the band an interesting stage presence. Their set seemed very short.

“Once around the Sun, cruising, climbing.
Jupiter cyclops winks at me, yeah, he knows who’s driving.
Hit neutral in the tail of a comet.
Let the vortex pull my weight.
Push the seat back a little lower.
Watch light bend in the blower.” 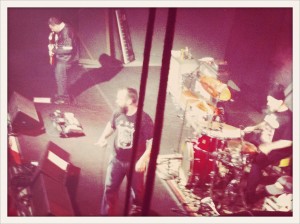 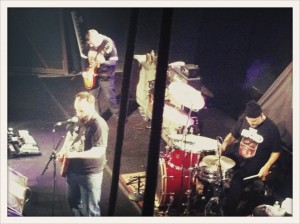 Between sets they played Alice in Chains’ Dirt…and then NIN’s ‘Happiness in Slavery’ right before the band came on…weird.

A curtain was dropped for the Black Label Society set, but I could see what was going on behind it. Therefore, I took the opportunity to film exactly what the band does before that curtain drops. I’ve always been obsessed with how it must feel before taking a stage for a packed crowd that came to see you, and being able to see behind the curtain allowed me a sneak peak to what normally happens backstage.

There’s something about watching someone do a ritual when they don’t know you’re looking. It’s a window into the person’s real self….what’s important to them, what makes them feel comfortable, a compulsion, a habit. Zakk Wylde’s appears to be prayers, beer (word on the street is it’s non-alcoholic), and hugs.

The band got off to a fiery start, but I did miss the fan blowing Zakk Wylde’s hair up as it had done the last time I saw them. At least the gorilla beating on his chest hasn’t changed. There has been a turnover in the crowd, and the new front row is denim-coated, smoking, and screaming. 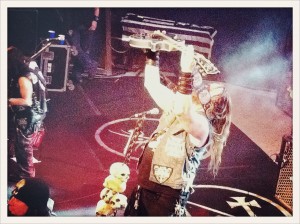 As I watched the band, crouched over the balcony, I got lost in the southern metal. When given a bird’s eye view like this, it’s hard not to feel removed from the show a bit. But it allowed me to think about why we are all here. It’s more than a band playing and a crowd watching. It’s about getting something that’s inside of you out. Expression. I became very aware of this during the piano piece tribute to Dimebag, ‘In This River’. Music is a conduit for expressing this sorrow, for a friend in Wylde’s case, and for a hero for the crowd. I often think about how I feel when I listen to a piece of music that means nothing to me: how it sounds too loud, how it’s forgettable, how the lyrics just are. Then I listen to something I love, and think about how it can never be loud enough, how the music makes me tap my fingers and my feet automatically, how the lyrics give me the voice I don’t have on my own. So I watched the performers and the crowd evolve in this experience together. 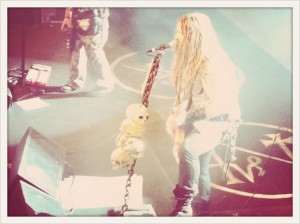 Through Wylde’s beautiful guitars, through his signature squealies, through the party songs and the sad songs, through watching lyrics sheets being placed on stage for nearly every song just in case he needed to glance at them, I watched, shivering in the damp cold. The crowd and the band were one. I longed to feel part of something.

The band finished their final song and took a bow together before leaving the stage. I nearly forgot what city I was in as I went to wash my hands in hot water to stop them from being numb….but this reminded me: 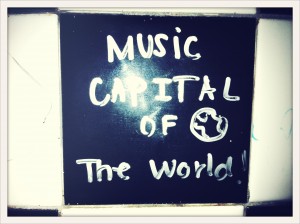 “Blind me
Erase what was
Stillborn, I have become

So empty
Just a shell of a (wo)man
Stillborn, this I understand”