Attending a festival alone is a weird experience.

Actually, attending a festival at all is a weird experience for me. I spend too much time in small clubs to enjoy the quantity over quality value proposition that a festival offers. But sometimes they are done right.

And I could tell after my first lap around Fx3 Fest that this one would be the exception to the rule. A smaller festival; it maintains some of the intimacy of the shows I normally experience while fostering the sense of community that festivals are known for. There are side by side stage setups so that there won’t be a lag between bands. There are interesting non-music activities going on. There are lots of food and drink options that bolster Austin’s keep it local mantra. There are tons of sponsors that seem to keep the prices of things from being too exorbitant. And as a media person, there is a giant backstage area where I can actually get work done when I have a lag in schedule. 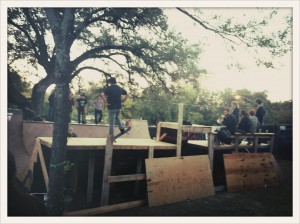 The first day was a short one, and I went mostly to just check out the setup. I watched some skaters and then decided to watch this Tesla Coil show. ArcAttack: the Singing Tesla Coils was an interesting way to kick off the festival. As they were finishing setting up, I was trying to envision in my head what it would be like…there were dudes dressed in chainmail, another in a labcoat and goggles, various guitars that look like they’ve seen better days. Then the music started- instrumental electronic metal- and the coils start popping along to the beat. The band is elevated above the coils smoking cigarettes while I’m thinking about getting hit by a stray bolt. It was bizarre, but cool, and I thought about what class at the University of Texas down the street this may have started out as a project for. It was especially cool when one of the guys in chainmail stood between the coils and ‘played’ them, and then the finale…’Iron Man’ on guitar between the coils. Check out the video montage below. 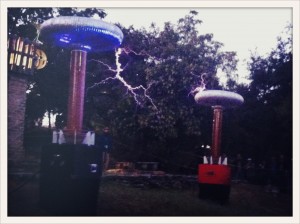 A comedian was on the mainstage, so I wandered around and, of course, found myself in the poster fair area. I was immediately drawn to Billy Perkins‘ section, where I went a little crazy and came home with 4 of his posters. And I bet by the end of the weekend I buy a couple more for my collection. 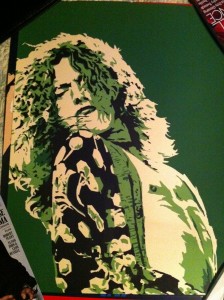 Then it was time for…Weird Al Yankovic? I never thought I’d cover him for my site, but here you go! It was surprisingly fun, though I just made it through the first hour because it started getting really cold out. I’ve heard Weird Al referred to as the ‘hardest working man in show biz’ before, and seeing his costume changes and such I kind of get it. The highlight for me was seeing how everyone around me seemed to know all of his songs….and I was especially tripping out on these two guys that kind of looked like Weird Al who sang along to everything with such emotion. My favorite part was the ‘Smells Like Nirvana’ portion…with cheerleaders and everything. I also thought it was funny that they did a Devo song, considering Devo had to cancel their appearance at this festival. You can see a snippet in the video below. 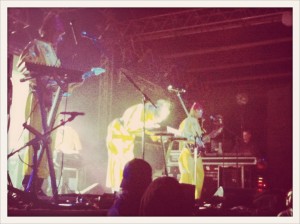