It was opening day of hunting season. Â On the drive to Austin, my car was dwarved by truck upon truck towing an assortment of ATV vehicles and men dressed in camouflage.

As I was walking into the festival, this guy starts up a conversation with me. Â “Why do you smell so good?” was the line. Â That turned into a 6 block conversation about perfume, which led to his ex wife, then his mom…I don’t know what it is about me, but people just open up to me immediately. Â It’s a weird thing, to play therapist on the fly. Â But it happens all the time. Â  Â

Saturday was significantly busier at Fx3 Fest than Friday, as expected. Â I was cutting it close already, but the hipsters with their large bags going through security made me miss Municipal Waste. Â As I rushed over to the stage just in case, people started yelling ‘Slayer!’ at me in response to my shirt.

I watched a little of The Gories, but then decided to go pick up my photo pass just in case I wanted to take pictures. Â “Your publication please?”. “Hardrockchick”. “Are you The Hard Rock Chick?” “Uh….yeah.” Â Then they handed me 3 drink tickets. Â I got a red bull and vodka before I realized that I hadn’t eaten anything and that drink makes me loopy anyway… Mistake #1.

So I find myself near the rail for The Dwarves. Â Mistake #2. Â I thought I was out of harm’s way, but ended up getting bounced off a chain link fence the entire set, which would be kinda fun, except I had my iPad in my bag. Â The Dwarves were pretty fun and everything I’d expect a classic punk band’s set to be like: vocalist crowd surfing, 2 minute songs about sex and whores, people loosing shoes as they crowd surfed and having them put on by security mid-surf. Â The crowd was entertaining on its own: I stood behind a guy with a ‘PARTY’ tattoo and a girl who wore boots with spurs on them. 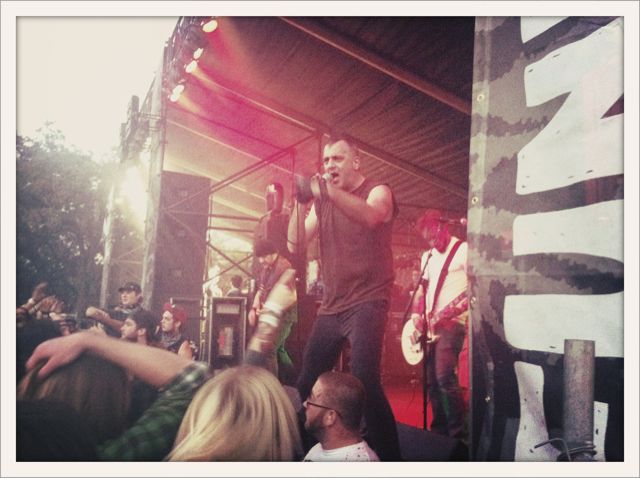 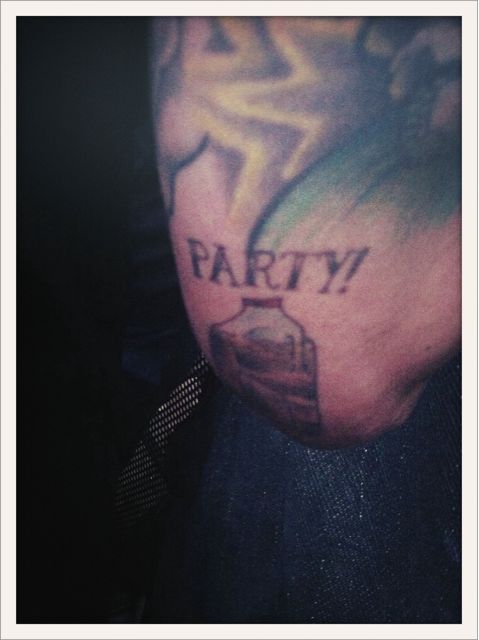 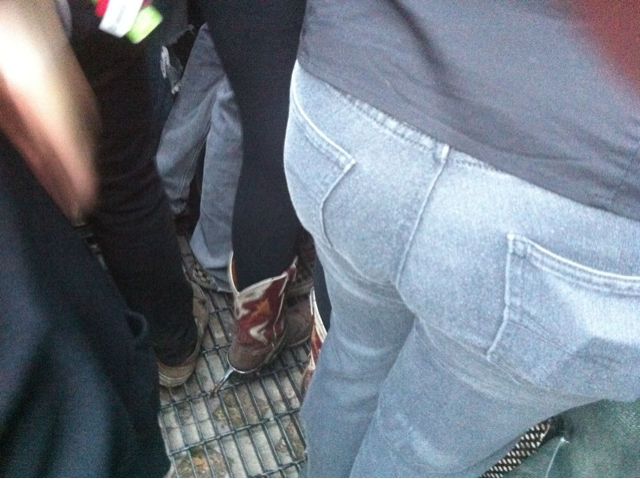 Next up was The Vandals, who I watched from afar, but would have watched closer had Josh Freese been on drums.Â

Then somehow I found myself on the rail for Gwar. Â Mistake #3. Â I blame the red bull and vodka. Â Last time I saw Gwar I did rail, and I told myself I wouldn’t do it again. Â But there I was, watching security put plastic bags over all the speakers. Â I was pretty sure there were quite a few people in the crowd who didn’t know what they were getting themselves into.

It was the smallest stage I’ve ever seen Gwar play on, but they still brought all of their show with them. Â I thought they might go easy on this crowd, but when a boar was brought out, sliced open, and fake blood gushed upon the front row, I realized that that would not be the case. Â I was really happy to see them eviscerate Sarah Palin and then ‘Lady Gaga’ got the crowd by shooting blood out of her nipples. Â The crowd was crazy, dripping people getting pulled out right and left. Â A guy in a denim outfit and a gorilla mask crowd surfed over the barrier twice and high fived everyone on his way out. Â But The best was when this guy was pulled out towards the end, after Oderus started spraying the crowd with whatever comes out of his giant hoo-ha. Â He stopped in front of me as security was dragging him out, grabs me by the shoulders, and screams in my face “HE CAME IN MY MOUTH!!!”. And then he gave me a thumbs up. Â A thumbs up! Â Who does that? Â See…people love to confide in me.

BTW, you know you are too close at a Gwar show when you can see the hair on Oderus’ ass. 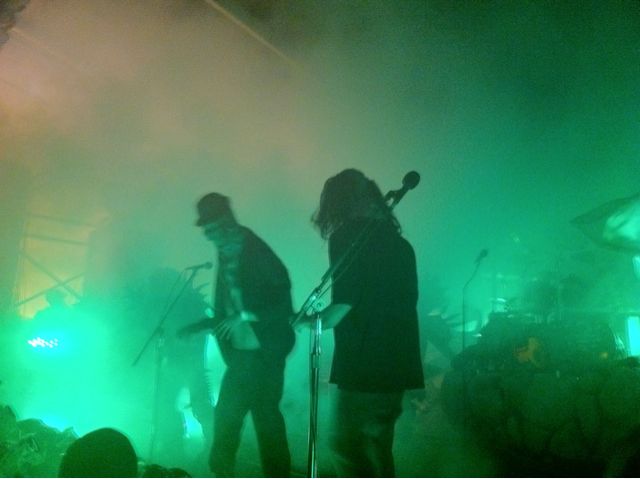 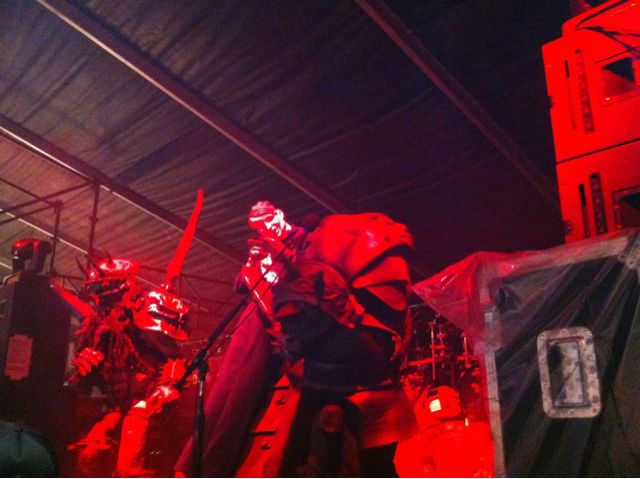 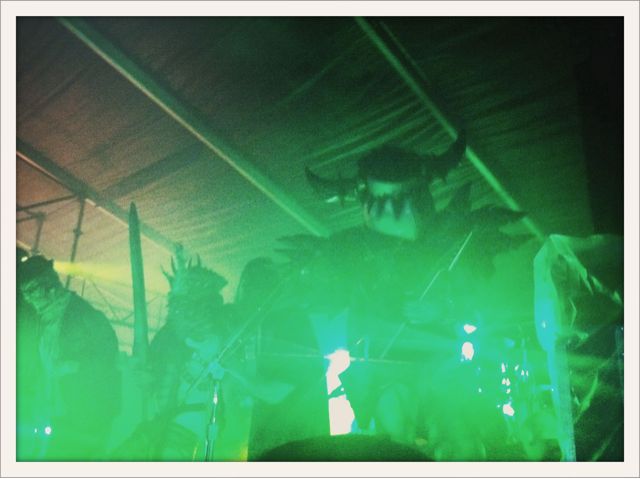 Afterward, I was completely annihilated, but the iPad survived! Â I had forgotten about it until half way through the set. Â However, I was completely drenched and freezing, so I watched a tiny bit of Bad Religion before deciding to leave. Â As I passed MGMT, they were playing that one song I kinda like, but I kept on walking, because I saw them before anyone knew who they were and the crowd they now draw is annoying.

On my way home, I almost killed myself taking this picture of my car hitting 6660 miles while I was driving 66. Â I remembered that it was hunting season, and was stunned by the National Geographic sized boar I saw standing on the side of the road as I drove through the gate to my place- a strange parallel to the Gwar set earlier. Â As I walked into my house covered in fake blood, I scared the hell out of my dad…who is still getting used to my bizarre lifestyle. Â  Â  Â  Â 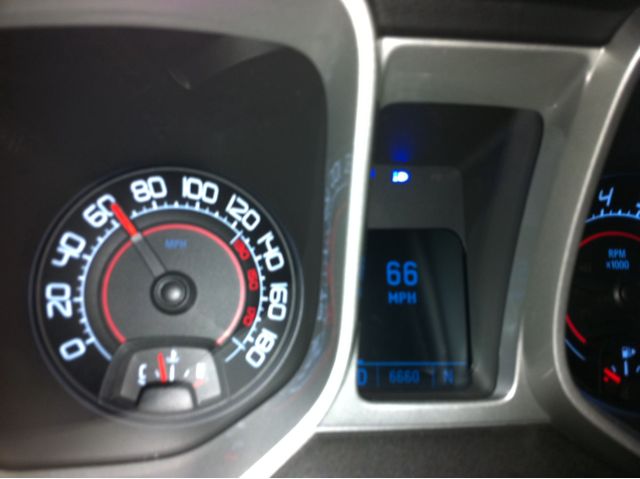