There really is no better story than real life.

While a great piece of fiction can take you on a journey through things that defy the laws of reality, there’s often nothing greater than a true story. It’s relatable, even when it’s spun by one person or the other, the winner or the loser.

The night began with drinks with my ex-boyfriend. He sometimes surfaces in my writing in a less than positive light, but recently we’ve put the past behind us and he’s become almost like a brother figure to me. I was with him from ages 16 to 23, and he was very close with my family. Now we can laugh about how many times he went to jail while with me (5?), how many guys he beat up for talking to me (8?), and the countless horrible fights we used to get into. It feels really good to not be afraid of him anymore, to have moved on for the benefit of my mom’s last months, and to truly have the perspective that even though this person did awful things to me, it made me who I am, and I would never change that.

After fighting post University of Texas home football game on an extreme losing season that makes everyone want to drink heavily afterward traffic and list drama, I was surprised that it was already time for direct supporter Ex Deo. They may be from Montreal, but Ex Deo are completely based upon Roman history. They wear warrior uniforms with Roman numerals on them, and there are flags hanging behind them. The extremely elevated stage at Emo’s lends to the regal role-play they command over the audience. Between growls, pounding drums, trudging riffs, and helicopter headbanging, they ask for the audience’s allegiance, which many oblige to by holding their hands up with two fingers pointed in the air. It was an odd contrast to have on that grungy Emo’s stage. 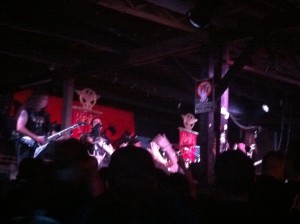 Between sets, the Nile Ã¼berfan started chatting with me. It’s funny how these types often find me at shows…they probably think I am a fellow Ã¼berfan since I’m by myself…but in this case it was my first time seeing Nile and I don’t know a ton about them. He had just had a run in with Karl Sanders outside and was verrry excited about it. I love watching people geek out on music.

When Nile came onstage, it took a minute to get used to how fast and heavy they were. I realized that it has been quite a while since my last death metal show. After seeing so much last year and earlier this year, I’d left the genre behind a bit when I moved away from San Francisco.

Part of the reason I love death metal is the crazy drumming involved, but the drummer was hidden between the stacks so I could barely watch him at all. Focusing in on the three up front, I didn’t realize how much they switch off vocal duties…and this is done seamlessly live as well. After watching so many laid back bands recently, I reveled in the speed of their hands, their crouched over posture as if they were about to pounce. But through all of this, it was Sanders’ grin that left the most lasting impression in it’s contrast to the sound, subject matter, and intensity. This was solidified when he went to growl an introduction to a song and started coughing, which led to laughing….Sanders’ is the jolly death metal guitarist. 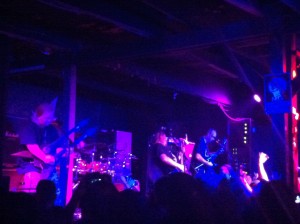 The band played about an hour and a half, as the pit churned out it’s average number of casualties. A late influx of females to the show led to some sort of catfight. Towards the end, I saw bassist Chris Lollis step to the front of the stage and stamp his feet a bit…which I thought was some sort of burst of intensity. However, as the set ended, he started yelling at some guy up front, for a good long while. Not sure what happened there, but pissing off the guy on stage is never a good idea.

That night, I dreamed of that trip to Egypt I’m starting to plan…