I’ve always been a little obsessed with death.

Be it horror films, serial killers, metal, or reality; the subject has always been a part of my life. I’ve seen everything from Cannibal Holocaust to IRREVERSIBLE. I have a copy of HITMAN sitting next to the A to Z Encyclopedia of Serial Killers, which is next to John Douglas’ Mind Hunter and True Norwegian Black Metal. I have murder and suicide in my family…lost school mates to car accidents, overdoses, and suicide…put pets to sleep…had a convicted serial killer once work for our family business…originally went to school to be a real life Clarice Starling…and have lost family members to horrific illnesses. It’s one thing we will all experience, something we all try to understand but never will until it’s too late.

I’ve been thinking about the subject a lot lately. It seems that the idea of death hits my peer group hardest. As a kid, you’re too self-centered, too inexperienced to understand it. As an elder, you’ve experienced death so much at this point you’ve become like a desensitized doctor. But at my age, you really start to think about your mortality. What you can and can’t control, the way time passes, and what you really believe in.

My morning was a great warm up for my evening; spent picking up trash along the side of the highway for my family business’ Adopt A Highway program. One thing that’s taken time to get used to being back in Texas is the amount of roadkill you see everywhere. So, naturally, there were a lot of dead animals in varying states of decomposition along the way. For a myriad of reasons, my sense of smell is not very good- so it was never until the last minute that I’d realize what I was about to encounter. And, yes, I took a picture of one for this piece much to my trash pick up partner’s confusion. 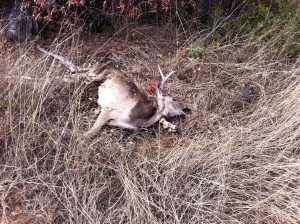 On my way to Austin, I saw the craziest moon I think I’ve ever seen. It was so low and so orange that I didn’t even realize it was the moon for a while. Talk about setting the mood absolutely perfectly for this show. Here’s a blurry picture of it that does it little justice: 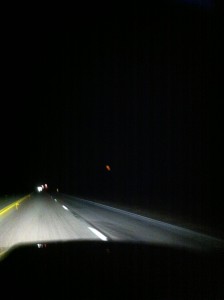 I arrived at the venue earlier than expected. Black Anvil‘s set began shortly after – a band that didn’t impress me the first time I saw them, but this time…I got it. I love it when that happens. Sometimes it just takes two times seeing a band; it could be that you have an off night, they have an off night….a lot of things have to click to make a set resonate. And they probably had the set with the best flow of the evening. I like that their version of black metal is stripped of the aesthetic, but their performance still felt foreboding. 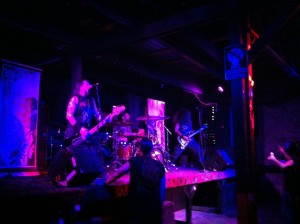 Next up, Averse Sefira from…Austin. The first thing I noticed was that the bassist reminded me a lot of a blonde King ov Hell. Then I noticed how his bass had duct tape on it, presumably so the gauntlets wouldn’t scratch it up. Methinks the scratches would be more evil. Unfortunately their set got off to a rough start; the guitarist’s amp blew after the first song, and the bassist’s mic wasn’t plugged in for the first few. But I have to say I was kinda impressed this was coming from an Austin band.

I believe this was my fourth time seeing Goatwhore this year. Every time I’ve seen them they get better. For a band that tours so much they’ve really got a great intensity and stage presence. I love how Ben Falgoust is so dynamic and all over the stage for this type of band. They take the aesthetic about half way there, but always have something about them that makes me think they don’t take themselves too seriously. It’s a tricky line to walk with this genre but somehow they pull it off. I love the progression of Goatwhore’s songs…the tempo changes, the way they often start and end abruptly. Towards the end of the set, Falgoust made a comment about not wanting to see anyone hold their noses when Watain comes out…which should have served as a good warning to some of the people in front who looked like they might not know what they were getting into. 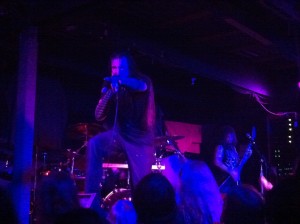 Check out much more amazing pics of Goatwhore by my friend Aline here.

Since my friends in San Francisco had experienced this set before me, I was prepared for the possibility that Watain would not be able to use all of the stage set up they are known for. But knowing that Emo’s is pretty liberal coupled with spying a few fire extinguishers on the stage made me think we might get the full show….and we almost did.

Covers were removed from an array of tridents, torches, and tapestries. A table was set with a chalice and assortment of candles. The fog started to roll in, and with it came the hint of a smell. That’s when I noticed the carcasses hanging from the tridents. All the points on the stage seemed to be lit, creating an amazing ambiance in this dingy covered outdoor space, as the crowd seemed to go into a trance. The only thing that broke mine was the musings of my friend, who was commenting on how the Swedish take decorating for the holidays very seriously. Then, before the band came on, an Emo’s employee came onstage and made a plea for the crowd to ‘stay the fuck off the stage’. 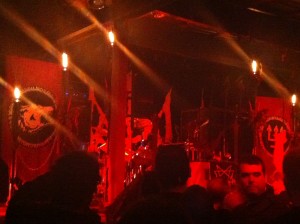 The band hit the stage in a different way than any other I’ve seen. First you see them. Then you smell them. Then you feel them. Then you hear them. And if you’re in the very front, you might taste them, too. You could count to 10, right when the smell hits and the blood- real blood- is spit onto the crowd, that those with a strong nose and weak stomach turned around clutching both and fled. I moved up.

They say that your sense of smell is strongly attached to memories. That putrid, iron smell took me back to when I was about 15 years old and a slaughter truck overturned on my street. The road was literally bathed in blood, and every time it rained for a month that smell steamed up from the street. It was one of the most metal things I’ve ever seen.

It was after midnight before the set began, and unusually warm for late November. The stage was literally perfectly set for this to be the one black metal show I’ve seen to give me a bit of a chill. I credit a lot of this to vocalist Erik Danielsson’s stage presence. There’s something about the fact that he looks so pixie-ish that makes him seem even scarier. Then there’s the way he twists into the mic to deliver his vocals…it’s somewhat otherworldly. And then there was the moment about three songs in, when a concerned Emo’s staff member went on stage and put out the tallest of the torches who’s flames looked to lick the top of the ceiling (hey- I was concerned, too). Before I knew it Erik was in his facing kicking at him til he backed off the stage, where they presumably went and had a little chat about how black metal aesthetic > fire safety and the show went on. 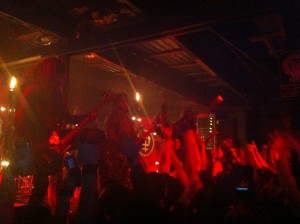 “Tonight we celebrate the end of everything“. It was interesting to watch the crowd take in this show…from those who were at their Satanic mass to those who were part of the local metal scene to those who wandered in presumably for the spectacle only. Towards the end, Erik raised some lit candles until the flames licked the ceiling again, causing a concerned Emo’s employee to start towards the stage and then think better of it. Then he took the chalice and and baptized the front and center with blood. 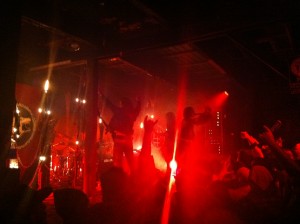 Check out much better pics of Watain from my friend Ray here.

It was after 1:30 when the band left the stage to an outro of music and fog. As I walked to my car past the band buses, I thought about how I hoped they had showers or else that is the smelliest bus in band history. I realized that I probably smell myself, and on the drive home thought about how I would explain this to a cop if I got pulled over. When I walked into my room, my cat looked hysterical as he sniffed my arm. The scent of death must have really permeated my skin, or perhaps it was trying to get out.