Sometimes you do things and don’t realize their full purpose until after the decision is made.

A mere six months ago, my life- and the way I look at life- was almost completely different. That was when I told my mom to ask my dad (since I used to never talk to him directly) if he’d like to go see Roger Waters. He said sure- even though the tickets were pushing $250 each- and we decided that we’d meet halfway between Texas and San Francisco and go to the Phoenix show. It was a Saturday night, and I wouldn’t have to miss work. And here I am now, with no job to miss, living back in Texas, and without my mom. So instead of a fly in/go to the show/fly out trip, this became a ‘we don’t want to celebrate Thanksgiving this year so we’re going to turn this into an attempt at bonding’ trip.

My dad and I have never been close, but he was the one that got me into music. Despite being very hard of hearing, he’s always been very into sound and audio equipment. While my mom was always content to just listen to country radio as background noise, my dad listened to tapes and CDs, and turned it up, and listened to it, and repeated songs he liked, and talked about why. He taught me to love Elvis, Little Richard, The Beach Boys, Roy Orbison, Buddy Holly, Willie and Waylon and Kris and Johnny. But if the music wasn’t his, he hated itâ€¦and he’s always hated most of my music. Nothing would make him madder than hearing me listen to hip hop when I was in schoolâ€¦.metal was a close second. So I had to sneak it. “One day you’ll learn to love real music/country music” he would tell me. Wellâ€¦..sorry, but no.

Pink Floyd has always been one of his favorites. They were the kind of band that he got so excited about that I received Pink Floyd stuff from him on a regular basis: a DVD for X-mas, a Dark Side of the Moon blanket in the mail, a t-shirt on a trip home. Now, I have always really liked Pink Floyd, but there has always been something stopping me from loving them. I don’t think I totally ‘get it’. Nevertheless, I knew my dad would love it for the music, and for me, this was mostly about being witness to the mythical production of The Wall in concert.

The last time my dad and I saw a concert together was Bob Dylan. Ironically, that was the first show review I ever wrote, for a class I took called ’20th Century Popular Music’, which planted the seed for what you are reading today. The last concert my dad had been to was to see The Beach Boys with my mom at the San Antonio rodeo a few years ago, when I bought them front row seats for their anniversary.

“I should have worn my Spurs shirt” my dad says as we enter the US Airways Center, home to the Phoenix Suns, amidst a bubbling crowd of people. We make our way to merch, as my dad looks overwhelmed by the amount of people there. The crowd was definitely on the older end of the spectrum, but there were a lot of families, dates, and younger folks there as well. It was a definite testament to the wide appeal of Pink Floyd. As I’m standing in line, I notice the guy in front of me has the two hammers tattooed behind his ear. Even though I’m a concert vet, I’m overwhelmed by the amount of people here. I start envisioning little bubbles above everyone’s heads with $250 in them, and $45 for the t-shirts that people are buying by the armload. It’s quite the moneymaking affair. But I am happy to acquire a limited, hand numbered litho for my collection. 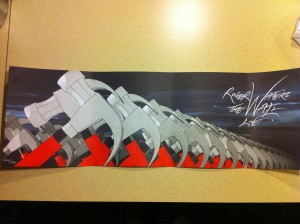 We made our way to our seats – a low row on the first level, but it still seems sooo farrr away. It’s hard for me to transition from all my small shows to this. It feels so impersonal and…shiny. I’m watching a guy dressed up as a homeless man work his way around the floor, with all of these people stopping him to take pictures and seeing the general excitement in the crowd. It’s been a while since I’ve been to a seated show…and the constant up and down to either let people in or out or to see once the show started would make me remember why I’m not a fan. 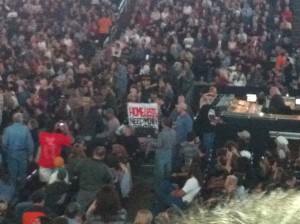 The show begins, and it is instantly apparent that no matter how high my expectations were for the production of this show, it was going to blow them away. There’s pyro and projections and monsters and amazing sound…all complimented by collective ‘ooohs’ and ‘ahhhs’ from the crowd. 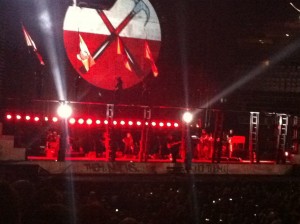 It was also instantly apparent that this was going to be more like going to a musical than going to a concert for me. It was easy to forget that the people on stage were actually making the music. Sometimes they were concealed by the wall, other times they just weren’t the focus of attention as you were too busy taking in some sort of visual distraction. But that was the point of this show.

The Wall is a very political album, and the way that it was modernized visually to deal with contemporary issues made me sad that so much hasn’t changed since 1979. One of the most interesting effects was the sounds of bombers flying overhead, and even though there wasn’t a visual to match all of the sound, everyone would automatically look up.

As ‘Another Brick in the Wall, Pt. 1′ was performed, the smell of weed in the air became overwhelming. Pink Floyd’s heavy tie-ins to potheads and acid droppers were readily apparent at this show, as expected.

Once we got to “ABitW, Pt. 2’, I thought it was pretty cool that a group of local kids came out to sing and dance. There was also so much crowd participation in saying some of the lines that it became eerie to hear. The place was completely full, and everyone knew every word.

‘Mother’ was hard for me to experience live. I couldn’t even look at my dad…it was all too much of a reality check.

It was around this time that I discovered that one of the guitarists in the band was the guy that- for some reason- gave me the creeps when I was a kid watching Saturday Night Live. I would have never thought I would be seeing this guy- G.E. Smith- perform live. It made me giggle my way out of my minor blip in happiness.

When the show stopped halfway for an intermission, my dad thought it was over and started to leave! I asked him what he thought, and his reaction was pretty cool: ‘I think that’s the most creative thing I’ve ever seen’. I agreed, but said there was one other show I’ve been to that came close, and that was NIN’s Lights in the Sky tour.

With the wall slowly being built in front of the band, the projections became more and more extravagant. And then came the part that felt most like a concert to me, ‘Comfortably Numb’. Yes, I know there was someone else filling in for Gilmour’s part up on top of that wall….but it still highlighted the performers, and in particular, the guitar solo.

“O. K.
Just a little pin prick.
There’ll be no more aaaaaaaaah!
But you may feel a little sick.
Can you stand up?
I do believe its working good.
That’ll keep you going through the show
Come on it’s time to go.”

About three weeks ago I had what is commonly known as a meltdown, or a breakdown….whatever it was, it was bad. There comes a point when you realize that you can no longer help yourself. So you seek medical help, and they give you something that, in a sense, makes you comfortably numb. It’s a very strange feeling, but a necessary one. It stops all the physical manifestations of pain and sadness…but inside, there’s the ‘real me’ in a glass cell, crying. Everything just rolls off your back, but somewhere in my mind I’m screaming, ‘this is supposed to really upset you!!!!!’ I guess the point of all this is to get over the hump, to break down that duality, and then unlock the cell again as a stronger person. But until then, I have become comfortably numb.

The rest of the show was a blur of the pig floating through the air over my head, and the wall actually coming down. The couple next to me got in a huge fight and left early. As soon as the show was over, I knew I was going to have difficulty writing about it, as it’s just one of things that you have to see.

The real beauty of this show to me was waking up the next morning to see my dad wearing his Dark Side of the Moon shirt, and telling everyone the next few days about how awesome this show was.

“There is no pain you are receding
A distant ship, smoke on the horizon.
You are only coming through in waves.
Your lips move but I can’t hear what you’re saying.
When I was a child I had a fever
My hands felt just like two balloons.
Now I’ve got that feeling once again
I can’t explain you would not understand
This is not how I am.
I have become comfortably numb.”