A bit more than a month after my last trip to LA, I found myself driving The Challenger up to the Sunset Marquis again. I was here for my final shows of 2010, and to finally look for a place to call a semi-permanent home in LA. My first trip of the year was to LA, and I’ve spent a weekend or so here almost every month this year. The girl who drove to LA to see Behemoth in January is a distant memory of the one who’s walking into the Marquis. But, though much has changed, the song remains the same.

Spotting NIN on a license plate driving down Santa Monica meant it would be a good trip: 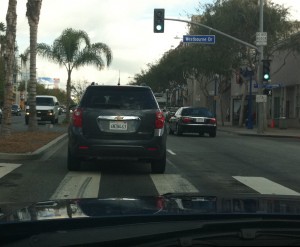 It was Friday evening, and it hadn’t stopped raining since shortly after I arrived. As my friend and I were leaving dinner at the hotel restaurant, we walked by a table headed up by Adam Lambert entertaining a captive audience. We drove The Challenger a short distance to The Roxy to see Camp Freddy.

We’re waiting in line to get in, and a bouncer comes up to look at our ID’s. He takes one look at me and asks, very concerned, “are you okâ€¦?” I proceed to whine at him that it’s cold and rainy and my hair is now ruined. He gives me a little ‘everything is gonna be ok’ pat as he puts on my wristband. He was the most empathetic bouncer I’ve ever encountered.

Once inside and dry, we grab a spot close to the stage. The last time I was here is a very fuzzy memory- Jane’s Addiction from back in VIP. This time around I would be sober and close to the action; the only common thread between that night and this one would be Dave Navarro.

I completely spaced out during the first opener, but when the curtain was lifted for Cherri Bomb, my eyes widened in surprise. Before me stood four teenage girls. The singer; a raccoon-eyed hot topic type sporting a lot of attitude. The guitarist; a tall blond with braces. The bassist; in two-toned semi-dreaded hair and combat boots. And the drummerâ€¦.oh the drummerâ€¦.a curly haired redhead with crazy eyes and the kind of energy you’re not sure whether to be attracted to or scared of. As they played their hard rock tunes, I thought about The Runaways and watched the men in the crowd shift uncomfortably as they tried to figure out where to look. I see their guitar techs and think about my friends in other, bigger bands who still do without. I listen to the vocalist thank the crowd and talk about how they’ve opened for all these big bands and have just been signed, and wonder about their future. Can you base an essence of a band on something that will inevitably go away? Age ain’t nothing’ but a number, but still. They are quite good, but I could tell there were times when they got a little excited and came apart at the seams. And then playing a cover of the ‘classic’ song – Foo Fighters’ ‘The Pretender’- made me feel…old. 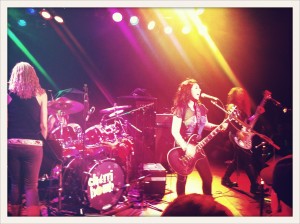 I have wanted to see Camp Freddy for quite some time, so I’m glad it worked into my trip so well. I don’t care what anyone says- I love supergroup type situationsâ€¦.whether it be something more ‘permanent’ like an Army of Anyone or something like Morello’s Justice Tour, the Bridge School Benefit, or this. There’s something about watching artists work together on an improvisational level that makes them seem inspired in a different way, and gives the performance a unique energy. Once musicians are stripped of their identity with the band they are branded into, you can see more elements of who they really are, and where they came from. I imagine these musicians playing with their high school bands long ago, learning some of these very same cover songs to hone their craft that would make them who they are today.

The floor was all abuzz with guesses about tonight’s special guests. Last week, Steven Tyler was the big surprise. The Roxy twitter posted something about a hatâ€¦which led to Slash rumors. Someone in the crowd had a bunch of Slash memorabilia. Then someone behind us said they spotted Jerry Cantrell.

I love that The Roxy has a curtain covering the rounded stage, heightening the anticipation at the beginning of the show. The lights dimmed, and the unmistakable staccato beginning of ‘We Will Rock You’ bleeds through the curtain as the crowd starts to clap along. The curtain raises and the crowd goes giddy at the scene before them. Matt Sorum behind the drums, Billy Morrison on guitar, Donovan Leitch on vocals, Chris Chaney on bass, and Dave Navarro on guitar. Navarro nails that guitar solo at the end, and the crowd boils over in excitement. This is just the beginning.

It had been a long time since I’d seen Sorum on drumsâ€¦and I had a bit of a hard time looking at him the same after reading Roxana Shirazi’s book and interviewing her. Watching Navarro play flooded me with many memories of the summer of ’09, when I spent a lot of time on the road with the NIN/JA tour. Onto ‘Ballroom Blitz’, and it was cemented that tonight would impress.

Leitch takes on more of an emcee role as the first guest of the evening takes on vocal duties- Steve Isaacs. It was cool to see him perform- that made for three members of The Panic Channel on the stage. For ‘She Sells Sanctuary’, The Cult guitarist Billy Duffy joined them onstage. Yes, I will admit I’ve been watching ‘Married to Rock’…it’s my one guilty pleasure TV show.

The next guest- Franky Perez– came out for ‘War Pigs’ and ‘Baba O’Reilly’. I wasn’t aware of him before this, but was really impressed by the conviction he puts into his performance.

Next up was Cypress Hill, who’s ‘(Rock) Superstar’ took the energy to a different level. I thought it was great that they added some hip hop into the setlist of rock staples. It was kind of odd to see them and not be completely encased in smoke.

It was around this time that you could really start to feel the improvisational part of the evening….the promise that ‘anything can happen’. The band is whispering to each other, figuring things out on the fly. Franky Perez joins Cypress Hill onstage to sing ‘Paradise City’. All of a sudden out of the corner of my eye, I see this tall blond guy headbanging furiously. Sebastian Bach has infiltrated the stage. It was my first experience with the girl behind me completely freaking out, which she would do several more times over the course of the evening. The look on her face was absolutely priceless. I would be lying if I said I didn’t scream like a little girl, too. That man is so iconic to meâ€¦and he makes me laugh as well.

I was so excited to see Juliette Lewis again. If there is one famous person who I’d want to switch lives with, it’s probably her. From Cape Fearâ€¦to Mallory Knoxâ€¦..to rock star…she’s had a cool career. I love the sense of inhibition she emits on stage. She was joined by Johnny Lang for a fiery rendition of ‘Proud Mary’.

It was odd seeing Mark McGrath. I don’t know why, but thinking about Sugar Ray just took me back to a no-no period of the ’90s for me. He’s had a strange pathâ€¦.working as a correspondent for Extra. However, ‘Fight For Your Right’ ended up being one of the most fun songs of the evening, as he was joined by Skinhead Rob from The Transplants.

Johnny Lang’s ‘Black Magic Woman’ seemed like an odd fit with the rest of the evening, as his bluesy guitar and those faces he makes that goes along with that provided a different kind of energy.

Sebastian Bach came back on stage; first singing ‘Silent Night’, sort of, and then launching into ‘Cat Scratch Fever’. Part of me wanted to scream “Savage Animal!!”.

It was time for the grand finale, as members of that band Billy Morrison plays with joined him on stageâ€¦.first the drummer, then the bassist, and then Steve Stevens and Billy Idol. Man, Billy Idol still looks great. Seeing Stevens gave me the second ‘Married to Rock’ moment of the night. I looked at the side of the stage because I really wanted to see Josie and her Hello Kitty cuteness in person. For ‘Dancing With Myself’, Steve Jones of the Sex Pistols joined them..but his guitar didn’t work at first….an unfortunate outcome of these types of shows.

At this point, we’re all dancing around like crazy. Idol’s curled lips are singing ‘Rebel Yell’ a mere feet from my face, and I’m crying ‘more, more, more’. Somewhere in my head, I’m pretending I’m at the coolest holiday party in the world, with the best house band and guests that are stellar at karaoke.

And then it all ended abruptly. For one- we all kept waiting for Slash, but also because I felt something on my shoulder and was surprised to find that it was a drumstick. I grabbed it and turned around to be like ‘cool!’ to my friend, because I never catch them, only to find her clutching her eye. The damn thing had nearly taken her eye out! Note to drummers- hand out the sticks, do not kamikaze bomb the crowd with them. It’s all fun and games until someone loses an eye.

Back out in the rain, and a short drive down the Sunset Strip, I lay awake in the rock ‘n’ roll hotel, wanting more, more, more…