“And the meaning of words
When they cease to function
When there’s nothing to say
When will it start worrying you?
Death – requiem” 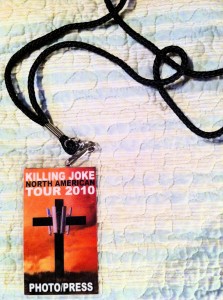 The last show of the year is always bittersweet. It holds a certain amount of weight; it’s the memory that will pervade the couple of weeks of silence filled with food, family, and festivitiesâ€¦.three things I don’t do very well.

I’ve really only been listening to Killing Joke for a few years, when I finally decided to check out the band that many of my favorite bands cited as an influence. This tour was originally scheduled for the summer, but was postponed along with the new album, Absolute Dissent. The tour would not be coming to Texas, so I decided to come out to LA to catch the final show of their U.S trek.

Before the show, I ventured down to Huntington Beach for my friend’s holiday party, where I decorated a giant gingerbread man in emo, Hot Topic fashion. Then I met friends for dinner at a Brazilian restaurant near The Wiltern, where we completely geeked out on music as slabs of meat were cut onto our plates. Pretty metal.

The last time I was at The Wiltern was for the Rocky Horror Tribute, but it will always be the venue that’s like visiting the grave of NIN for me. The scene inside was pretty spectacular, with everyone dressed in their industrial metal finest. Once inside on the floor, I was shocked at how uncrowded it was. The rain really seems to freak LA people out.

I had missed the opener, so it wasn’t long before the lights dimmed and, surprisingly, ‘Masked Ball’ from Eyes Wide Shut started playing. There is something about that music– and that movie- that gives me goosebumps.

The show started slowly but strongly with ‘Tomorrow’s World’, and the band immediately proved they were worth flying here for. Despite this being a tour celebrating the original lineup, the focal point for me was definitely vocalist Jaz Coleman. He stands up there spewing the vocals with this monotonous growl, stiff and angry. His dark blue jumpsuit and minimal make-up, coupled with his economy of movements made me think of Michael Myers in Halloween. That jumpsuit would grow increasingly shiny over the course of the night, as his sweat soaked it like the rain had my clothes outside.

‘Love Like Blood’ once again makes me think of NIN. The remastered Pretty Hate Machine has been spinning in my car, and I think about how varied NIN records are, even though there is an essence that binds them all together. Killing Joke is the same; people who only know them for this song and ‘Eighties’ would probably not guess it’s the same band who does ‘The Death & Resurrection Show’.

The new songs and the old intertwined well as the set progressed. I watched pockets of the crowd completely lose it to the music, while others appeared either mesmerized or checked out for the holidays. To be honest, there were times in the set where the band had me, and others where my mind was sort of somewhere else- which was completely a result of things that had happened and that I was anticipating happening to me while in the ‘LA bubble’ as I call it.

I would say that rather than reveling in individual songs during this set, I enjoyed the vibe as a whole. I thought about how Killing Joke has been such a big influence, even though they never saw much commercial success (and most people who asked what show I was seeing in LA were confused). It’s like that famous quote about how everyone who bought Velvet Underground records started bands, or how so many future musicians were inspired in the audience at that Sex Pistol’s gig. It’s never about how many people know about something, but that the right people know about it. That’s the philosophy behind my site. The grease in the wheels of life is awareness…something I can geek out on for hours. I wouldn’t be at this show if I didn’t reignite my interest in KJ through Behemoth’s cover of ‘Total Invasion’, which made me think about how I had first heard that name long ago in association with Nirvana’s ‘Come As You Are’ but had put the music away for a while. Or how I probably wouldn’t be standing next to my friend if I hadn’t gone crazy that one day when NIN tickets went on sale and decided to add that Chula Vista show to my schedule and sat near her in line. Or that if I hadn’t agreed to meet that guy that my friend said I’d like at that bar that one night in 2003, and we hadn’t started dating, I probably never would have started this site. Whoa…the blog outlasted the relationship…imagine that.

Anyway, the set came back into focus when ‘Requiem’ began….the first song from the first album at my final show of the year, a song about the end and reflection…it was perfect.

The next song I got swept up in was ‘Asteroid’, who’s punchy beginning imbued the crowd with a different kind of energy. I love that album, and wish they had played more from it.

The encore began with the popular ‘Eighties’, and I remembered how we had heard it right before Camp Freddy came on the night before. It was guitarist Geordie Walker’s birthday, and everyone sang for him and a cake with candles was brought out. Then the cake was placed in the crowd as people grabbed handfuls while ‘Pandemonium’ began….pandemonium indeed! I’m glad I wasn’t down there to get cake thrown in my face.

As we scurried out to the car in the rain, we saw another person doing the same out of the corner of our eyes. That turned out to be Billy Duffy, providing ‘Married to Rock’ moment #3 for the weekend.

And that sums up a year of shows for HRC in 2010. This was my 112th musical adventure…it’s been quite a trip.

“The sound of breaking glass
This is a reflection
Death – requiem”