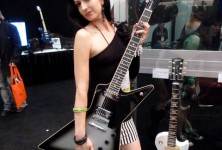 The valets at my hotel bid me farewell as I leave to relocate to my friend’s in Huntington Beach. They think I’m quite a character, dressed up as I was at 10am. It was time to pick up my partner in crime for the day to hit up NAMM again.

We pull into the parking garage and see a sign that says ‘No Parking’ with a bunch of empty spaces behind it. “Just go around it!” she says. After a small hesitation, I do, and the day of rebellion begins.

I lead her around the now familiar but more crowded convention for a while. We meet up with my friend from the day before, and happen to see John 5 at the same time. The friend who knows EVERYONE and John 5 acknowledge each other, and he goes over to chat and we follow and I ask for a picture. As I sidle up to him I say ‘there’s two of us’ pointing at my girlfriend….and without missing a beat he goes “it’s not the first time”. Hahaha…oh, musicians. 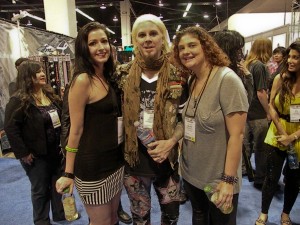 We wandered around some more before heading over to see Brendon Small and Bryan Beller of Dethklok fame do a short talk about the bass tab book they just released, where they discussed Brendan’s solo record project and the future of Metalocalypse (it’s currently under negotiations). Afterward, we lined up to get what we planned to be an epic picture, but when we got up there the security said ‘no photos’. Brendon and Bryan informed us that this wasn’t their decision, and told us to wait until they were done. But the signing ran long, and we never got the photo (we even ran into Bryan later and he apologized….haha). I still have my photo with Brendon from many years ago:

Brendon had mentioned that a Dethklok guitar was on display upstairs in the Gibson booth. We spent the next hour or so trying to figure out how to get upstairs. We finally made it up there (after taking an elevator that went into an area I’m sure we weren’t supposed to be in), and we were immediately overwhelmed by how many guitars there were in there. An entire room with rows upon rows of beautiful guitars! And it wasn’t until after a little while that we realized you could actually pick them up! So, after figuring out the precarious release mechanism, we did what anyone would do…mini photo shoot! Some older men asked if they could take my picture with the Dethklok guitar, and since I’m nice I said yes…and hilarity ensued. The guy leans down all professional style and starts saying to me “You’re a tiger! RAWR! Now, you are tired” What? I don’t know how these people find me. 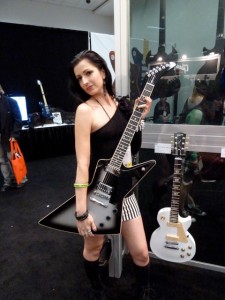 We then headed over to the Fender room, and stopped to see Duff McKagen, who was doing a signing right outside. I chatted with him about the Lemmy doc that I had seen him at a couple nights before. 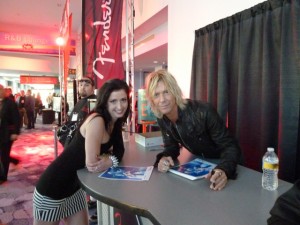 The Fender room was even more impressive…but you couldn’t pick them up. I saw Dino from Fear Factory hanging out in there along with some other guys…geeking out on guitars.

By then it was time to go, so we hobbled off in search of food….after taking this cool picture first:

Apparently everything in the vicinity is reserved in advance, so we squeezed into a bar just to get off our feet for a bit.

After that, we headed over to the Hilton, which is attached to the convention center. Many of my friends had told me this was the place to go if I didn’t have a badge. But, I still thought, how fun can hanging out in the hotel lobby be?

Well, once we walked in, we realized that the entire lobby had been turned into a two stage affair with live music and satellite bars set up throughout and a ton of people just hanging out all over the place. It’s kind of amazing that the hotel allows their lobby to get taken over during NAMM- the few unsuspecting Disney type families we saw wandering around must have been thrilled. We took a perch on a couch next to concierge and basically just sat back and watched people. I felt like I was catching a glimpse of what the Continental Riot House was like back in the day. 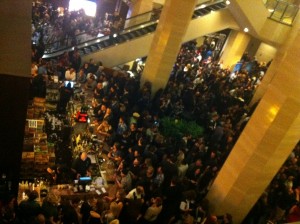 There was this one guy painted up green and orange all over that kept messing with people. I don’t know if he was drunk or just mental, but it was kind of disturbing. Everyone wanted their pics taken with this guy, though. 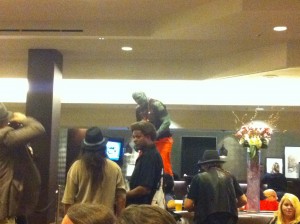 As each hour passed, people got drunker and more…interesting. I ended up seeing a lot of familiar faces, and spent the most time chatting with my friend with Sick Drummer magazine and Scott, drummer for Abysmal Dawn. A man sitting near us mentioned how he hadn’t been to NAMM in 20 years, and how it’s different because back then people ‘knew who he was’. I felt sad about that…and couldn’t bring myself to ask who he used to be, or whatever.

Approaching 10 o’clock, the ‘sharks’ started to swim around us. Some of those sharks included women, often alone and without NAMM passes on, obviously patrolling for musician action. Walking into the ladies’ room (never a line for the ladies’- but always for the men’s!!) was quite a scene of lipstick application and hair flouncing. We decided to go wander around, where I saw a guy in an Alice in Chains shirt that I pointed out to my friend, and no more than 5 minutes later, we walk right by Mike Inez. MAGIC!

The scene started to get a little scary for me, so we decided to call it a night. When we were leaving, we were redirected because there was a line to get in…to the Hilton lobby…behind a velvet rope. HA!

And that was the end of my NAMM experience. I had such a great time. The music industry may suck right now, but that doesn’t stop the fact that we’re all just people who love music. NAMM was the kind of place that reminded me of that. 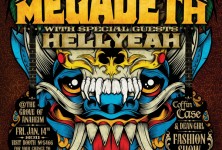 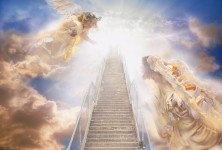