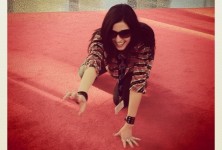 Last year’s GRAMMY Pre-Tel was one of the surprise highlights of my GRAMMY adventure. On paper, it looks really boring: 100 some odd categories including genres of music that I would probably only listen to if it happened to be piped into a restaurant I was dining at. But there’s something about how casual the ceremony is, how authentically heartfelt the speeches are, and how you realize that a GRAMMY is a GRAMMY is a GRAMMY…it may not be televised, but the level of talent is just as high. And, it’s where all but one of the rock awards are given.

I hopped on a shuttle to GRAMMY ground zero with MissMusicNerd and TwangNation. GRAMMY day for us started at 11:30am. We were let out at the head of the already hectic red carpet, which we were allowed to walk down, but only the ‘I’m not anyone famous’ portion. Over the last few days, I’d taken advantage of my time on the carpet while it was being constructed 🙂 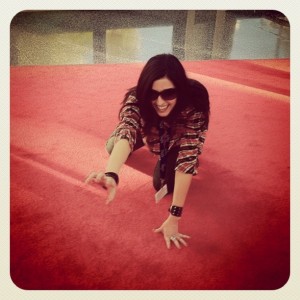 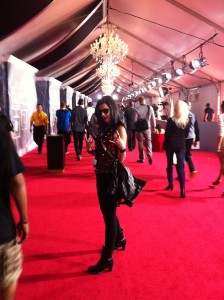 As we walked into the convention center, we were discussing how the ceremony is GA, so we can sit wherever we want. TwangNation remarked that I can go in the pit then, to which I said there is no pit, to which MissMusicNerd said, “the pit is wherever she goes!” The really cool thing about the Community Blogger program- besides the fact that we all kick ass at what we do- is that we each all live and breathe our genres, which makes us all verrry different. But our love for our music ties us together and allows us to all get each other so well….even if I’m kinda the black sheep of the bunch.

After a brief cruise through the reception where I didn’t spot any of the nominated rockers (it was much too early for them) we grabbed some seats in the second row in front of the podium where the winners would be accepting their awards.

This year’s pre-tel was hosted by the lovely Esperanza Spaulding and the man of many voices, Bobby McFerrin.

The first memorable award for me was when The Doors documentary ‘When You’re Strange’ won for Best Long Form Video. Robbie Krieger was there to accept the award.

The next big moment for me came when The Beatles won for Best Historical Album.

When it came time for Kathy Griffin to present a portion of the awards, she had us all laughing hysterically. Yes, some of it was mildly offensive, but I think it fit the tone of the pretel well. Case in point:

Hands down the best acceptance speech of the night came from 71 year old first time GRAMMY winner Mavis Staples, who beat out the likes of Willie Nelson and Robert Plant for Best Americana Album. Unfortunately I cannot find a video of it anywhere, so you’ll just have to take my word for it.

Cyndi Lauper is one of the first artists I ever knew of: I can remember having Madonna vs. Lauper conversations in Kindergarten! So yeah, it was pretty cool to finally see her perform, even if it wasn’t ‘Girls Just Wanna Have Fun’.

Finally it was time for the Rock awards!!!

The Black Keys won for Best Rock Performance by a Duo or Group for ‘Tighten Up’:

My blogger neighbors laughed at my excited squeal for the Best Hard Rock Performance category. I was quite surprised that it went to Them Crooked Vultures- the newest act of the bunch. Granted they do have a member from Led Zeppelin….but I just think that the tracks by Soundgarden and Alice in Chains better represent my idea of what a hard rock song is.

The Best Metal Performance went to Iron Maiden…which didn’t surprise me considering last year it went to Judas Priest. It was Maiden’s first GRAMMY, as last year was Priest’s first. Metal seems to just be one of those categories that honors the legends after their best work has been done. You know, like Jethro Tull.

I happened to look over at the only other group who seemed to be making noise during the metal award, and one section over happened to be Tom Araya and family! 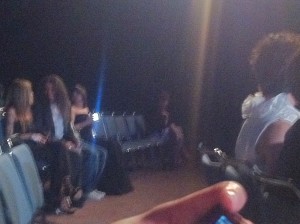 The Best Rock Instrumental Performance went to Jeff Beck, who ran right by me to accept his award, wearing jeans and boots and looking quite good for his age.

Best Rock Song went to Neil Young’s ‘Angry World’. This album was one of my favorites of the year. Young was there to accept, and he talked about how this was his first GRAMMY for music.

After the last rock award, we snuck off to the media center to recharge our devices from all the live tweeting we’d been doing. As we made our way down the aisle, I was trying to post one last tweet when I almost ran smack into Herbie Hancock who was going up to accept an award. Rockit.

Once outside I spotted the red-headed and raven-haired members of Megadeth chatting with Araya….hmmm…Big Four….should I stay or should I go? 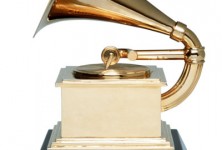 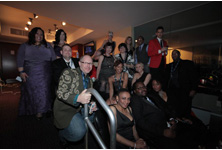