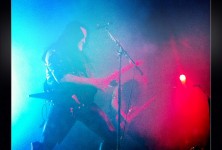 I woke up one day last week and decided that today was the day that I stop letting people walk all over me.

As I emerge from the shadow of my time of need, I’m gaining some clarity. I’m starting to figure shit out…that a friendship is a fallacy, that my love was just their lust, that a promise was just another word. It’s not naivety, or that these are fresh thoughts, but rather a snowball of things that burst my bubble to a point where I decided to stop getting mad and start getting even.

After a week of phone calls, emails, and in person visits that consisted of saying words like “disappointed”, “frankly”, and “legal action”, I decided to reward myself by having a house party and cooking a fancy meal for a bunch of friends. There’s nothing like the encouraging words of people who have known me for half my life. There’s also nothing like hearing everyone around you talk about their marriage and kid problems, and realizing that being alone….it’s not that bad!

By the next night, I was ready to blow off steam at a show I’d been waiting an eternity to see. Last year, I had to skip Immortal’s sole West Coast LA date. Now given a second chance, this final date of their tour in San Antonio proved to be exactly what I needed.

After spending Monday evening in this same venue, I was glad to see that the San Antonio metal community was in full effect this night. A line of black clothes and unreadable band logos stretched across the sidewalk as the sun went down on this warm Saturday evening.

Bypassing the tough security pat down given to the boys for just a glance at me from afar, I picked up my Immortal laminate and headed with my friend in tow to grab a cold Mexican beer and a spot at the corner of the rail. The sea of metalheads grew around the awkward rails lining the center pit, and everyone seemed to be armed with a cigarette and a beer bottle. The entire place screamed danger, except for the side of plush U-shaped booths and fake palm trees for when the venue is a regular dance club. 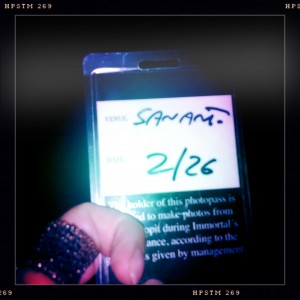 A long time passed. We were approaching 10pm when they started to chant ABSU, and finally the house lights went down and the three piece from Plano, TX hit the stage. There was obviously a lot of local pride for this band as the crowd was enthralled by their performance. I, on the other hand, could not get into it. From the drummer/vocalist’s hands free mic and shiny headband, to the guitarist’s luscious hair and the bassist’s insanely fast maneuvers….I couldn’t see the black metal forest for the trees here. I don’t know how the drummer handles the vocals like that….I was watching every appendage move as well as his mouth and my mind got tripped up just thinking about it. 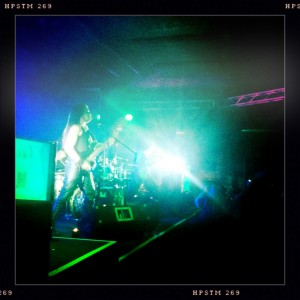 I’m in the beginning stages of planning a European excursion, where I hope to go to Norway so that I can experience the land that gave birth to all of these interesting bands like Immortal. I know that Bergen is not going to be the place I envision: a cold, damp, dark land of forests, meadows, and rocky streams populated by 6’4″ svelte men with waist-length dark hair….but I want to go check just in case.

Immortal has a different live vibe than any other black metal band I have seen. This was apparent from the moment they emerged from the fog and thrust their theatrics upon the crowd before them. They forgo the dark and satanic route, the wall of distorted sound and speed over showmanship performance, the blind anger and fear inducing theatrics in lieu of a set that didn’t take itself too seriously and was more KISS influenced than I would have expected. 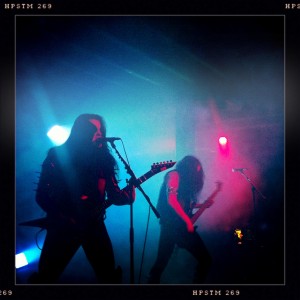 Most of the black metal shows I go to leave the crowd entranced and mostly immobile. This time the crowd surfing action was so intense that I bailed out of the photo pit before one song was over. A security guard even had to leave at one point because he had an asthma attack. After being pulled from the top of the crowd and into the photo pit, all surfers were directed to leave right where I was standing. So the auxiliary show to Immortal on stage became the Immortal crowd surfing contingency fashion show of sorts. Coming down the runway we have this dude for the 10th time. Oh look at this one, he’s kinda hot except for those upside down crosses tattooed on his chest! Wow, that chick is so not wearing a bra, she must have been fondled like crazy up there! And then there was the guy who lost his glasses coming over and they landed on stage, and one of the Immortal guys picked them up and handed them to the guy mid song! 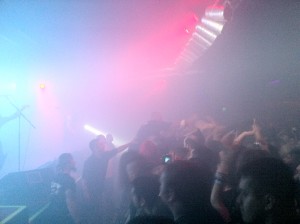 Yes, there were glimpses of the famous crab walk as well as some Simmons-esque tongue action. But theatrics aside, the set was so enthralling and tight that despite everything else going on, it was hard to tear my eyes away from the stage. They connected with the crowd in a way many bands wish they could. It was in the way they moved, with their eyes, the way they perfectly choked songs and started them again. They could ask for crowd participation without it seeming like pandering. 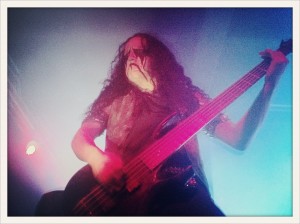 At one point, the heat level rose fiercely in the venue. The Immortal crew started bringing out plastic cups full of water for everyone in the front. Now, part of me thinks this is a rare act of kindness by a band crew, but the other part of me started writing this black metal fanfic about a crowd of thirsty metalheads drinking tainted satanic water and going on to wreak havoc on their city after the show. But that’s for an entirely different blog. 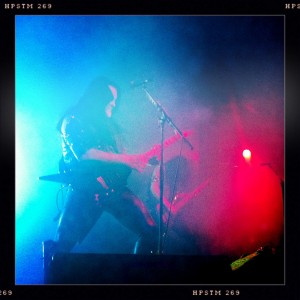 From the beginning of ‘All Shall Fall’ until the end of the main set with ‘One by One’, it was like building a precarious tower in Jenga and having it all crash down at the end. ‘One by One’ just completely eviscerated the crowd, and I could sense that things were getting broken over in the middle of the floor. Sure enough, by the end of the set, when the crowd cleared, the floor was littered with broken glass…not something I want to have to think about on top of flying bodies.

When at a show like this, I may be standing there, not moving much, observing it all around me. But the energy around me is seeping into my pores. That is why I love shows like this, why I listen to metal, why I write this blog. It affects me, and after everything else in the world, I left feeling immortal.

“Rise those who despise the weak
Spare none and ride proudly on the winds of death
All defeated by our call, all defeated by the wars
Under the hovering thunders of darkness. 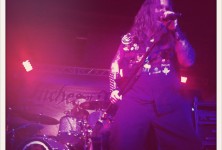 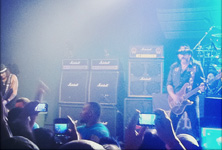