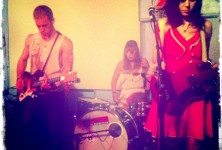 It was a very frustrating evening that had me completely rethinking my no badge/no wristband/no problem policy.

I had intended on seeing the Metalliance tour which was making a SXSW stop: St. Vitus, Helmet, Kylesa, and Howl…who I even interviewed that evening. But they were playing at this tiny place called Dirty Dog, which had a capacity of less than 200 apparently. I tried to get in early on but was rejected. So I did my interview and then tried to get into an APTBS set. BADGE ONLY. Then we tried to see The Black Angels…BADGE ONLY. And the SXSW employees were all rude about it. So I argue: I’ll pay. There’s not that many people in there. Etc, etc…no go. I even went back to Dirty Dog to try to get in after Helmet….after most of the people inside left and I could see a sparsly populated room….no. NO. NOOOOO! I was so mad, and then some random dude started talking to me, and I discovered that he’s from my small town and we know a lot of the same people and he knows the owner of the bar and the OWNER couldn’t even walk us in. It was beyond frustrating.

So my girlfriends and I left the main part of Sixth Street and drove to the East side at 1:30am to a shady venue called Hotel Vegas. It was a free show The Vandelles were playing. 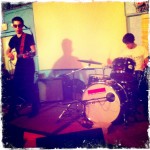 As we walked in a band called The Vacant Lots were finishing up. It’s the kind of place where there were a bunch of strange folk, you didn’t want to touch anything, and the ladies room didn’t work.

So as I’m writing this I’m thinking about how the first time I saw The Vandelles was over 3 years ago in the now defunct 12 Galaxies in SF. And then I remember that I actually saw The Vandelles two times before this at SXSW but forgot to mention it! I saw them at The Parish on the first night and then through a window somewhere else earlier that day….this is not a Vandelles problem but a me problem, and ultimately it is a result of the fact that this random 2am East side Austin set was the best I’ve seen them play. 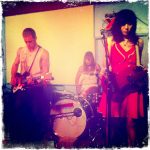 They had great energy even though it was late…or really early…and they had probably played three sets on that day alone. The drummer must use a Bump It or whatever that thing is called because not a hair was out of place. There were creepy people there smiling creepy smiles at them and taking creepy pics with them after. But they totally rocked it, that surfer garage rock vibe making everything else from that evening all right. At the end, they played a new song and the guitarist messed up a note at the very end, causing him to terrorize his guitar….which I loved.

When I climbed into my car it was nearly 3am. I was stuck in traffic as I made my way to the freeway…because many other people were just now leaving as well. It allowed me to watch what was going on around me. A school bus parked on the street was housing a show and about 100 onlookers were dancing inside and out of it.

Then I thought….since I never go to the big festivals, SXSW will probably be my Woodstock….my Monterey Pop….my Altamont.

And I took a mental snapshot. 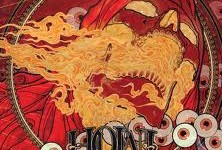 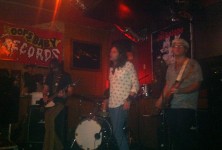