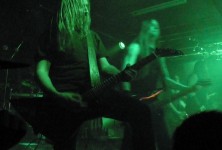 Two weeks ago I went to the land of the Vikings; and now the Vikings came to me.

What is it about travel that can make you feel so alive? I’m not talking about go-lay-on-a-beach-for-two-weeks travel, or package-tour-travel-guide travel, or even really stay-in-one-place travel; but the kind where you go off the beaten path, you push yourself to your limit, out of your comfort zone, and into a new headspace where you learn what you truly like and don’t like, and what’s great and not so great about where you call home. Sure it’s expensive, timing is always an issue, etc….but as they say, you only live once and you never want to look back and regret not doing something.

Spring skipped Texas, and Brutal Brandy and I are standing outside the White Rabbit awaiting our interviews with Amon Amarth. We’re trying not to melt before being in front of the camera, discussing the usual pre-interview topics like: who do you think we’ll get to talk to, do our questions have any crossover, nerves, and general fandom of the band. I love doing interviews, even if it doesn’t really fit in with the rest of my site (I don’t do record reviews or any sort of news stuff)…but it is wayyy harder than it looks. 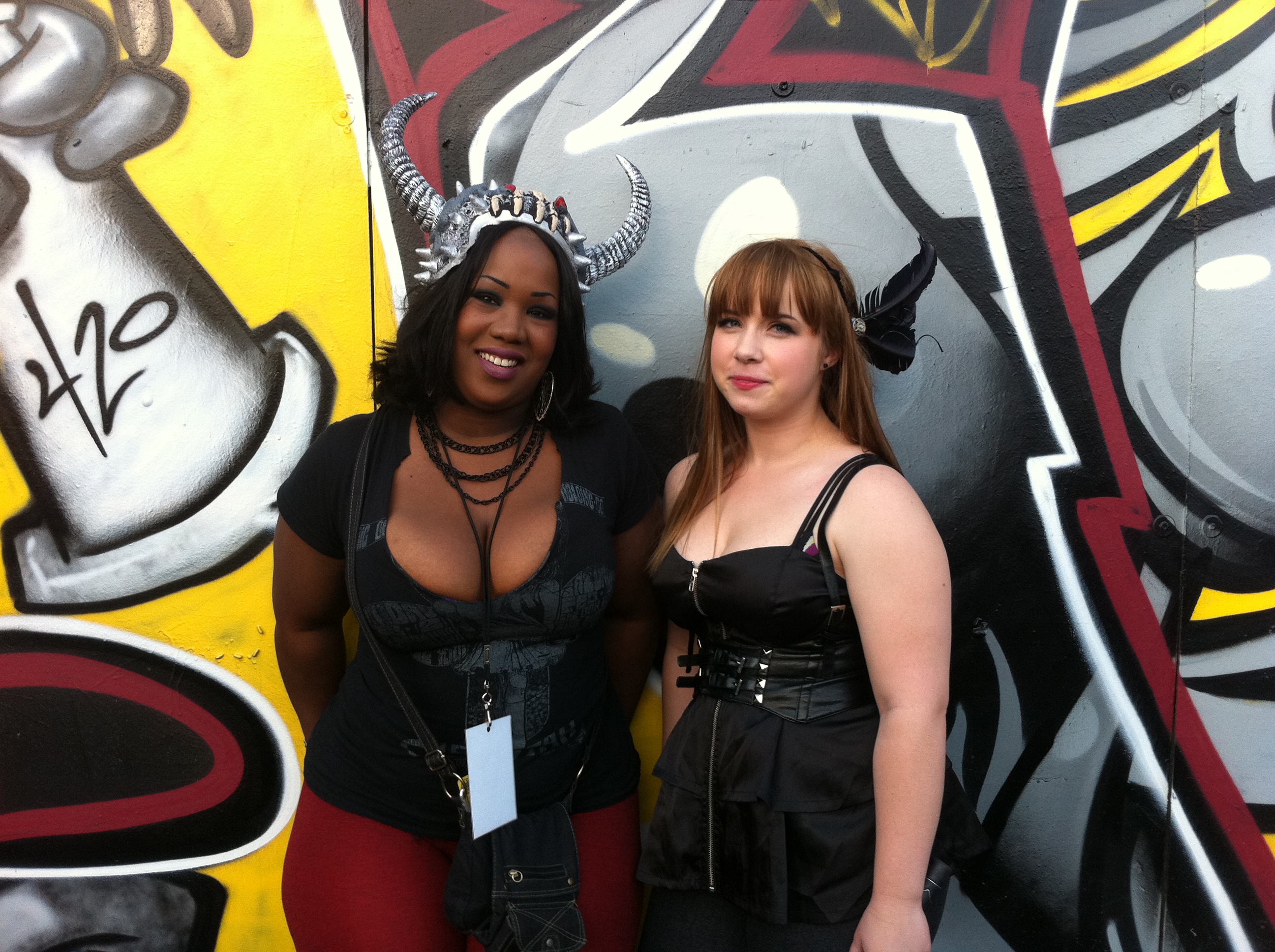 The time comes and we go inside for our interviews. Brandy interviews Olavi first; look out for it to be up on The Guantlet soon; it’s hilarious, and her interview style is much different than mine! She graciously filmed my interview with Fredrik Andersonn, the drummer, and you can see it here!

There was still lots of time until the show began, so we relaxed and chatted at the picnic tables as the heat gave way to a pleasant evening. As doors opened, Brandy’s horns and her friend’s feathered headdress were met by a few other pieces of Viking attire, namely a horn that someone was actually drinking out of. 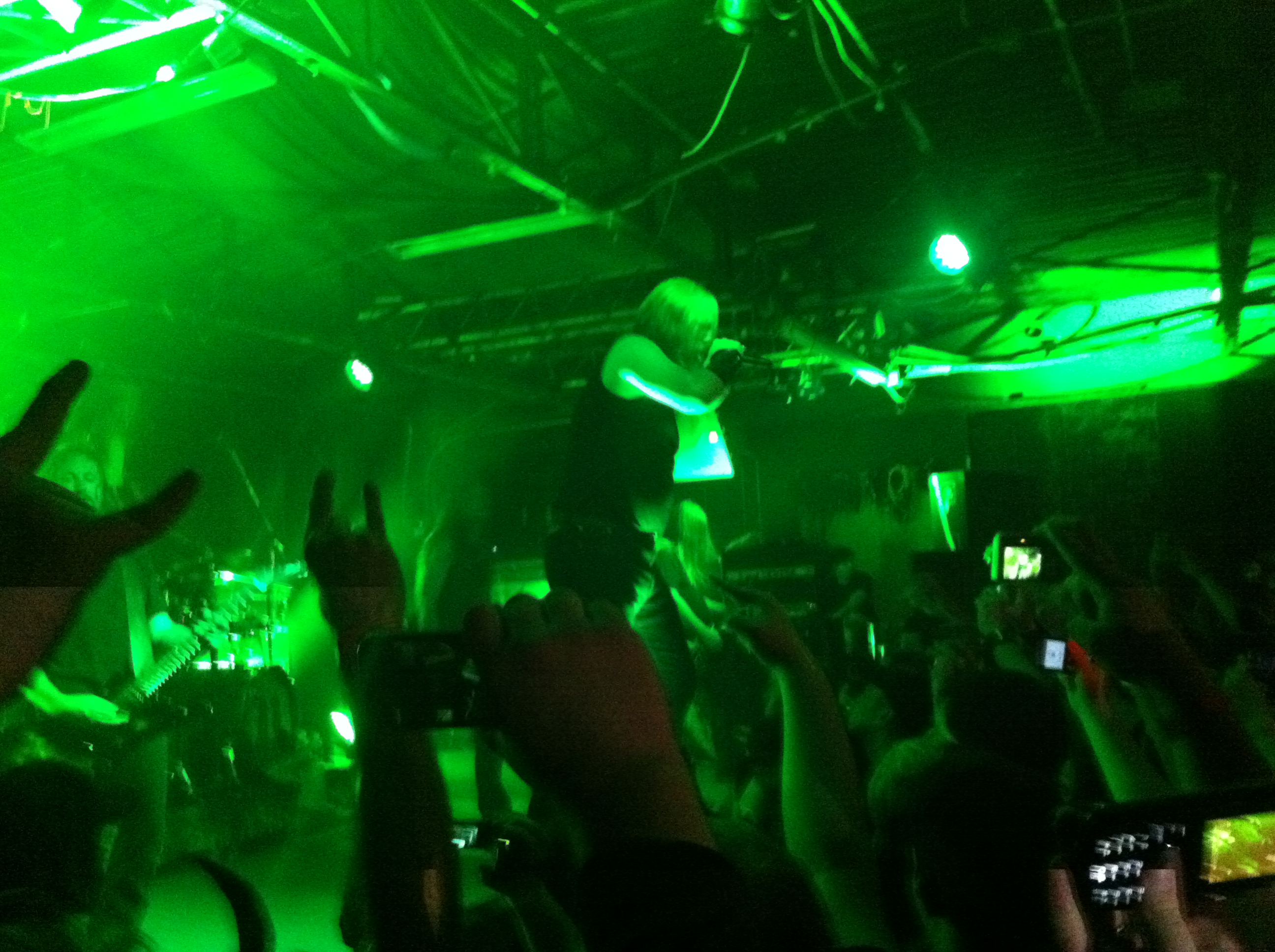 Last time I saw Amon Amarth was in San Francisco in a large venue opening for Fear Factory, which was just…odd. This time, within the sweaty confines of the smallish White Rabbit, we were to be treated to two full sets by the band. First, their latest album Surtur Rising in its entirety. Then, another full set of old favorites.

Because this was the only Texas date people had come in from all over, and the mood of the crowd was rather jovial. It was probably the best crowd I’ve seen at a Texas metal show since I’ve been back. And that made what we were about to witness that much better. 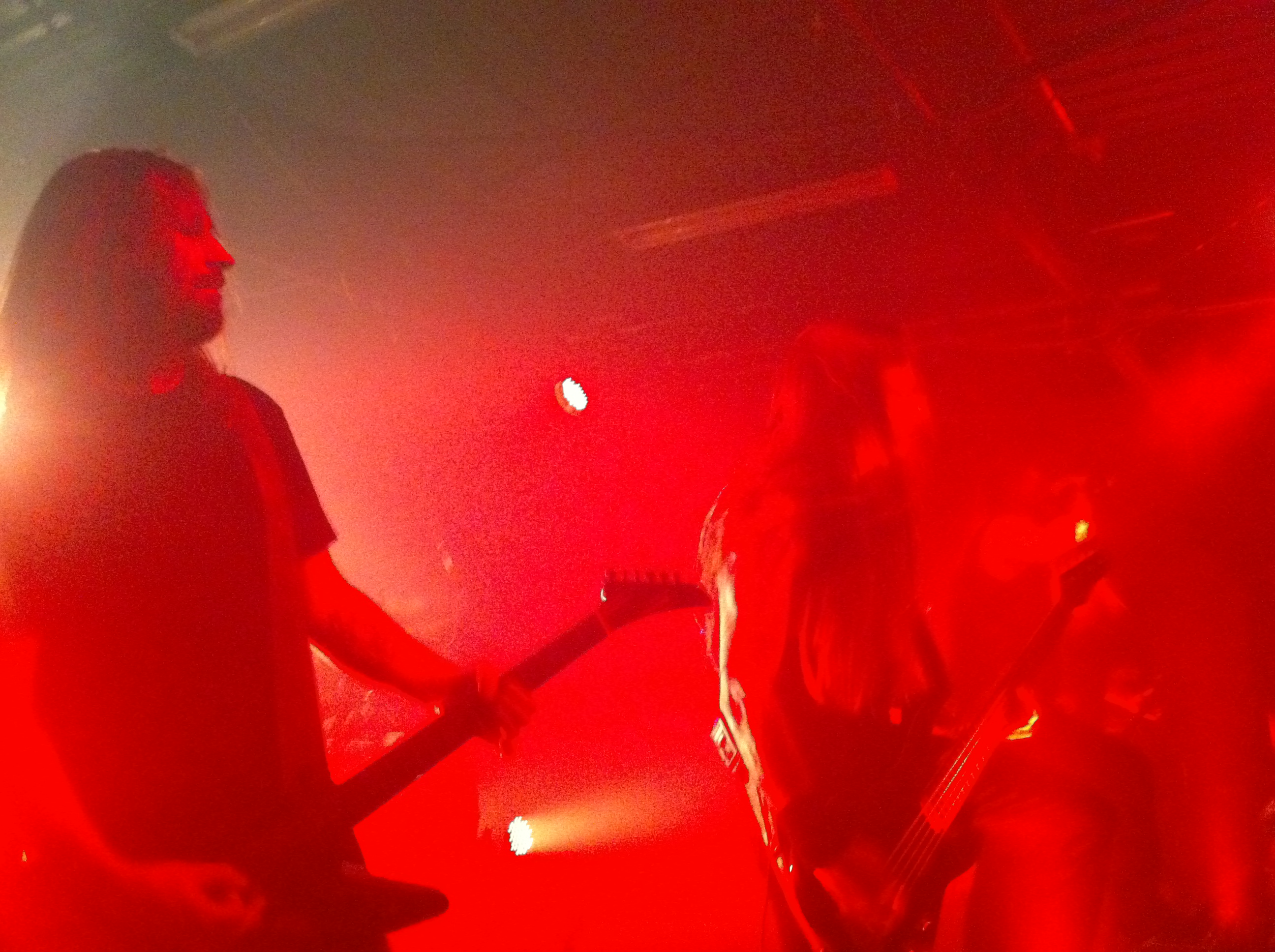 The way the fog spilling from the machines was lit up by orange lights made it seem as if the band entered the stage after it had been pillaged. Even if Amon Amarth’s music wasn’t great, they’ve got a presence that just evokes respect. I particularly like this latest album, and hearing it all the way through did not disappoint. Johan Hegg is such a presence; you can just see that his family tree leads straight back to Viking rulers. I do admit that when I hear him speak I can’t help but suppress laughter thinking about Nathan Explosion. In fact, if he had been my interview subject I was going to ask him if he’d say “hamburger time“. I was also going to show him first hand my entry into the Viking Beard contest. YEAH RIGHT. 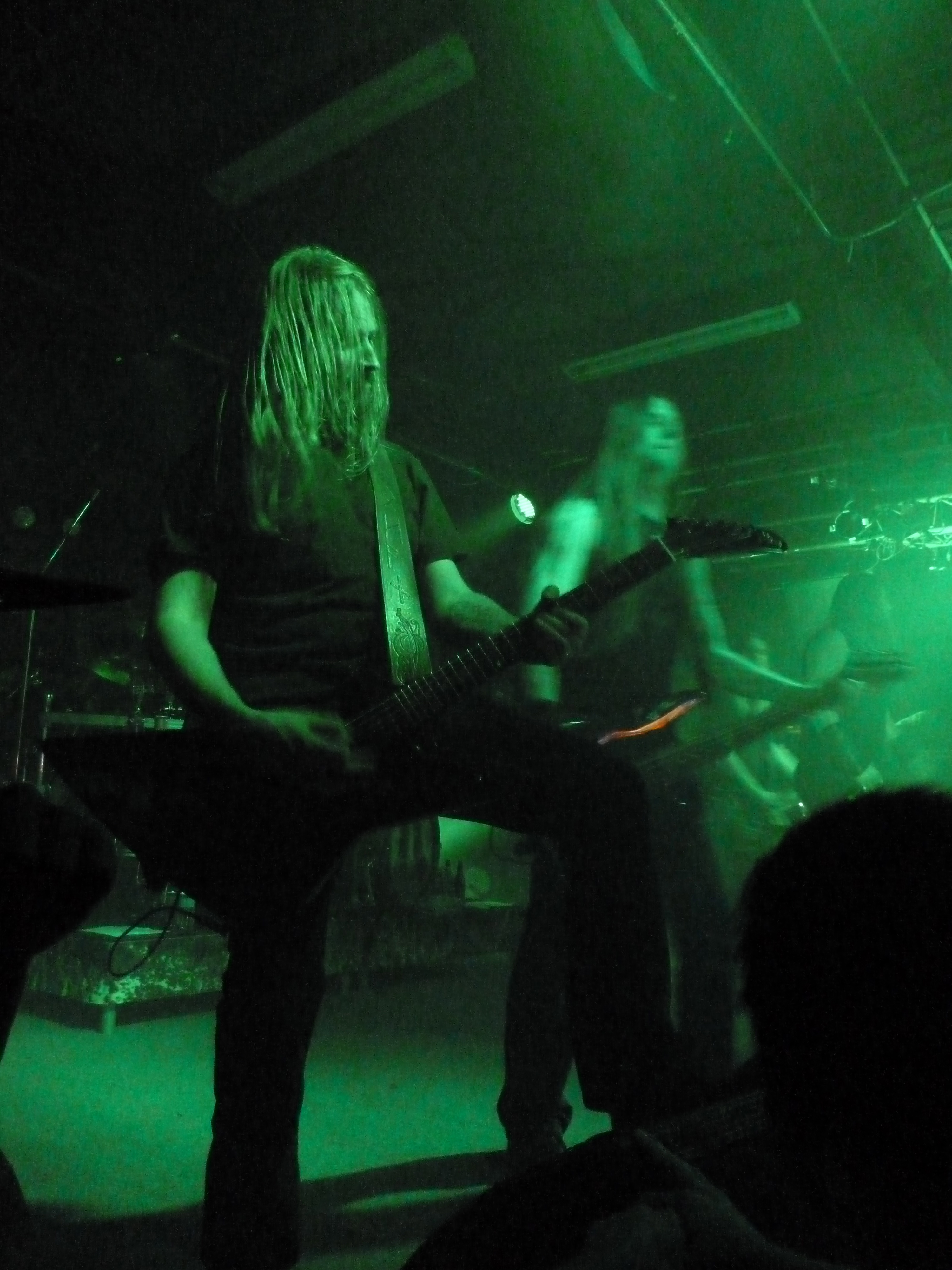 My favorite songs on the new album are “Live Without Regrets” and “Slaves of Fear”; they’re the kind of songs where I learned that headbanging with my new jewelry provides some interesting consequences. The set marched on to “Doom Over Dead Man”, and act one is completed as the band takes a 30 minute ‘beer break’.

The set resumed with full force, and the band and crowd settled into the familiar material. That’s when the crowdsurfers started, and when I scratched my head again as to why White Rabbit has no barricade. But flying body parts towards the stage doesn’t phase this band. I had moved up to the stage, and while the sound in the speaker up against my left ear was reaching in and pillaging my brain, it was great to see their musicianship up close. Their guitars have some interesting adornments. 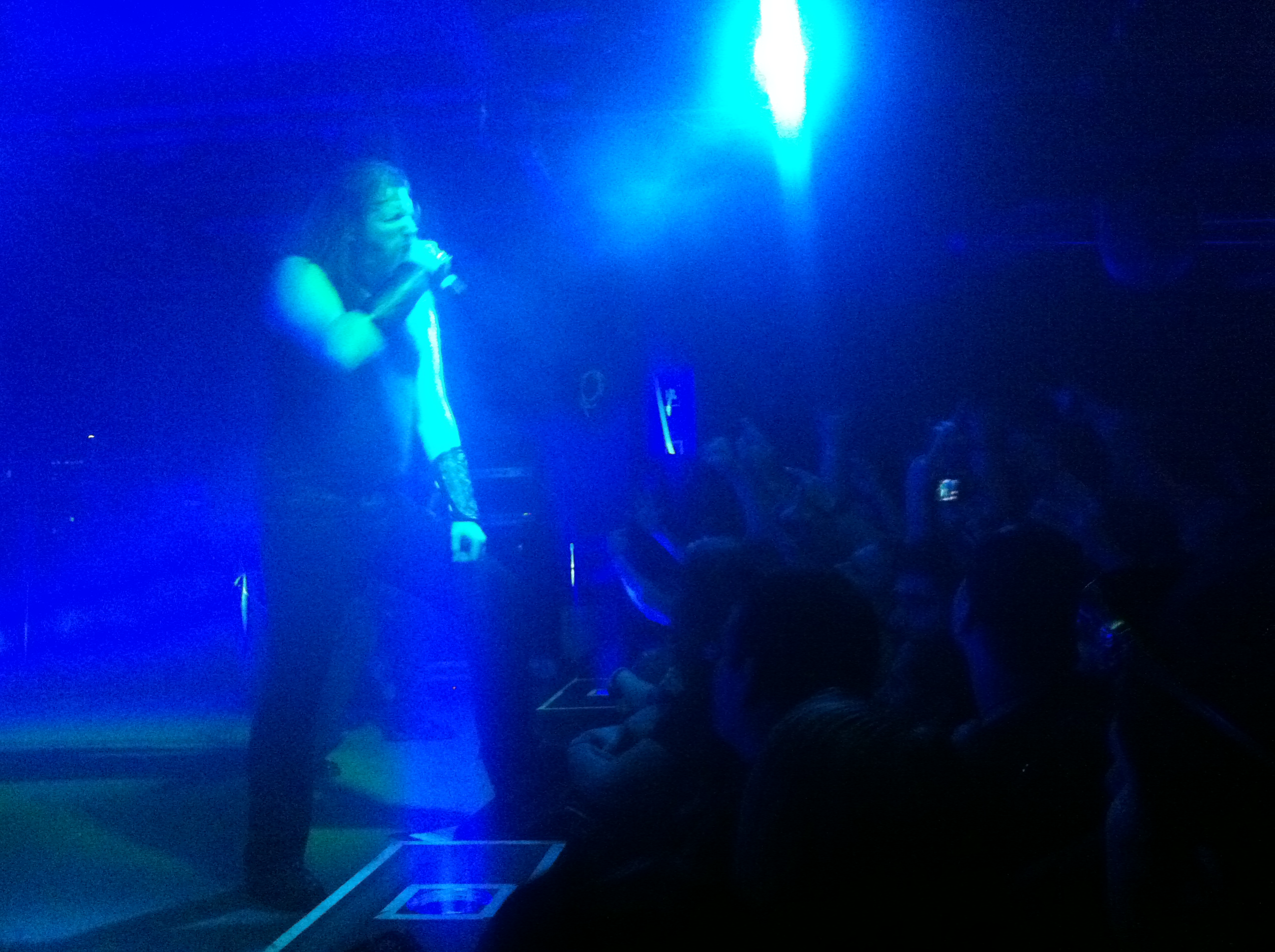 The highlight for me was definitely ‘Thousand Years of Oppression’. That song has that cinematic feel to it that sweeps you up and takes you somewhere else. If I had a Viking sword, I would have raised it.

After two hour long sets the band still came back out to do a three song encore to a crowd that wouldn’t quit screaming for them. At the end, they bestowed many gifts upon the crowd- water bottles, guitar picks, drumsticks, and handshakes- even though they had already given us so much. 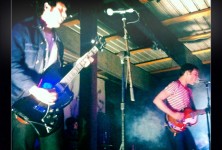