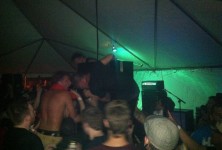 In a space behind the retro, hipster-infested Beauty Bar lies a stage. Beyond that stage is a chain link fence. Behind that chain link fence is an alley. And in that alley are a bunch of crazy people who are trying to claw their way into the show.

It had happened before, during Death From Above 1979’s set during SXSW…only there was mace and police involved. This time around the fence shook by hand or by crates being thrown at it, by people climbing it or moshing into it…but no one did anything about it. We were officially in no-man’s land. 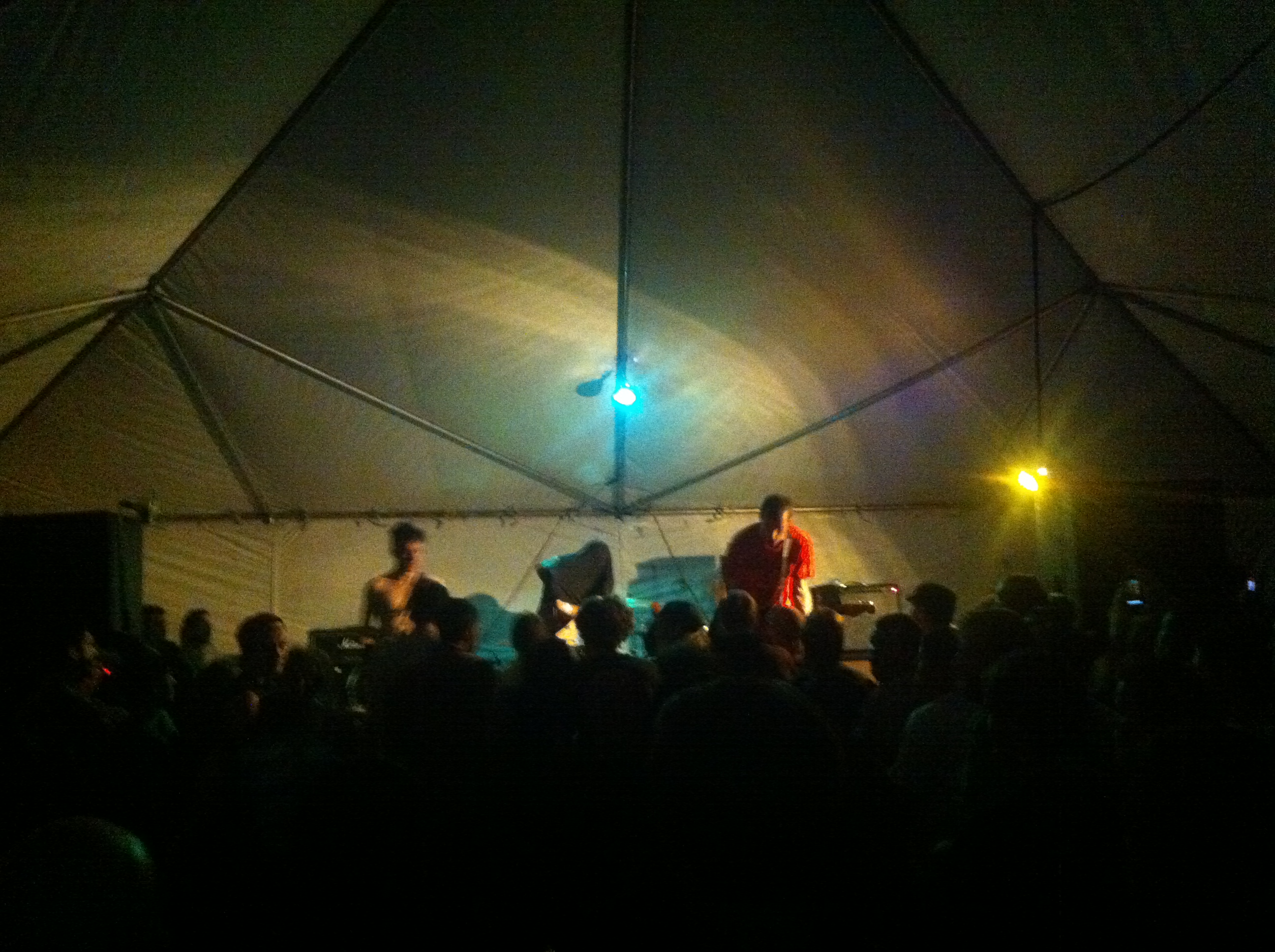 I had just interviewed The Dillinger Escape Plan’s guitarist, Ben Weinman, and was watching the Ceremony set, first from the middle, then from the soundboard, and then from the fence where all of this began to happen….I was trying to escape the heat and flying limbs, but they were coming from all directions. I could barely see what was going on on the stage; I do know a couple of times the guitarist (I think) stuck his hands in the air to adjust his lacey black gloves and I sighed at the thought of early ’90s Trent Reznor. As the mosh pit grew the fence crashed more as I wrapped my arms around my precious cargo, my interview in my bag. There was no place to stand out of harm’s way.

I had read a tweet from DEP vocalist Greg Puciato about wanting to set something on fire, so I was pretty sure that this set was going to get even crazier than what I’d seen from them before. I watched them set up the stage- it was pretty small so it was a tight squeeze. At least three very excited guys expressed their enthusiasm about the set to me, including a DEP virgin, who I confidently told that his life was about to change, kinda like Natalie Portman’s character tells Zach Braff’s character in Garden State.

From the first note to the last, it was like war in there. A friendly one, like when football teams practice against each other. The pit looked like everyone was trying to find some invisible microscopic item that kept moving locations, and Greg and Ben were the experts jumping in to assist. Guitarist Jeff Tuttle had to face the side of the stage where I was standing, but he would travel to the front as much as possible. Greg climbed the speakers and traversed the top of the tent like he really was looking for an escape plan. And I would later discover why…..someone threw a fucking knife on stage! I seriously never ever want to experience a Dimebag moment; perhaps this review should have been called Knife Party.

Why are we drawn to DEP shows? I think we have a psychological need to lose our minds for a bit, and this is our preferred method. Call it catharsis, call it craziness, call it chaos; there is something truly unique at play here. You just know when a band is feeling it and you’re all in this together. Greg shouts to the band, “Destro’s! It’s not on the list but I wanna fucking play Destro’s!” It’s the only time when I like to hear the words ‘not on the list’; this was spontaneity on top of spontaneity. And then I see Jeff throw down his instrument and grab an amp and drag it out to the center of the stage. I can’t see it but I can smell and feel the heat on top of the heat already in the air; that amp went up in flames. And then they started playing a bit of Jimi Hendrix’s ‘Fire’; that’s what I call a climax. 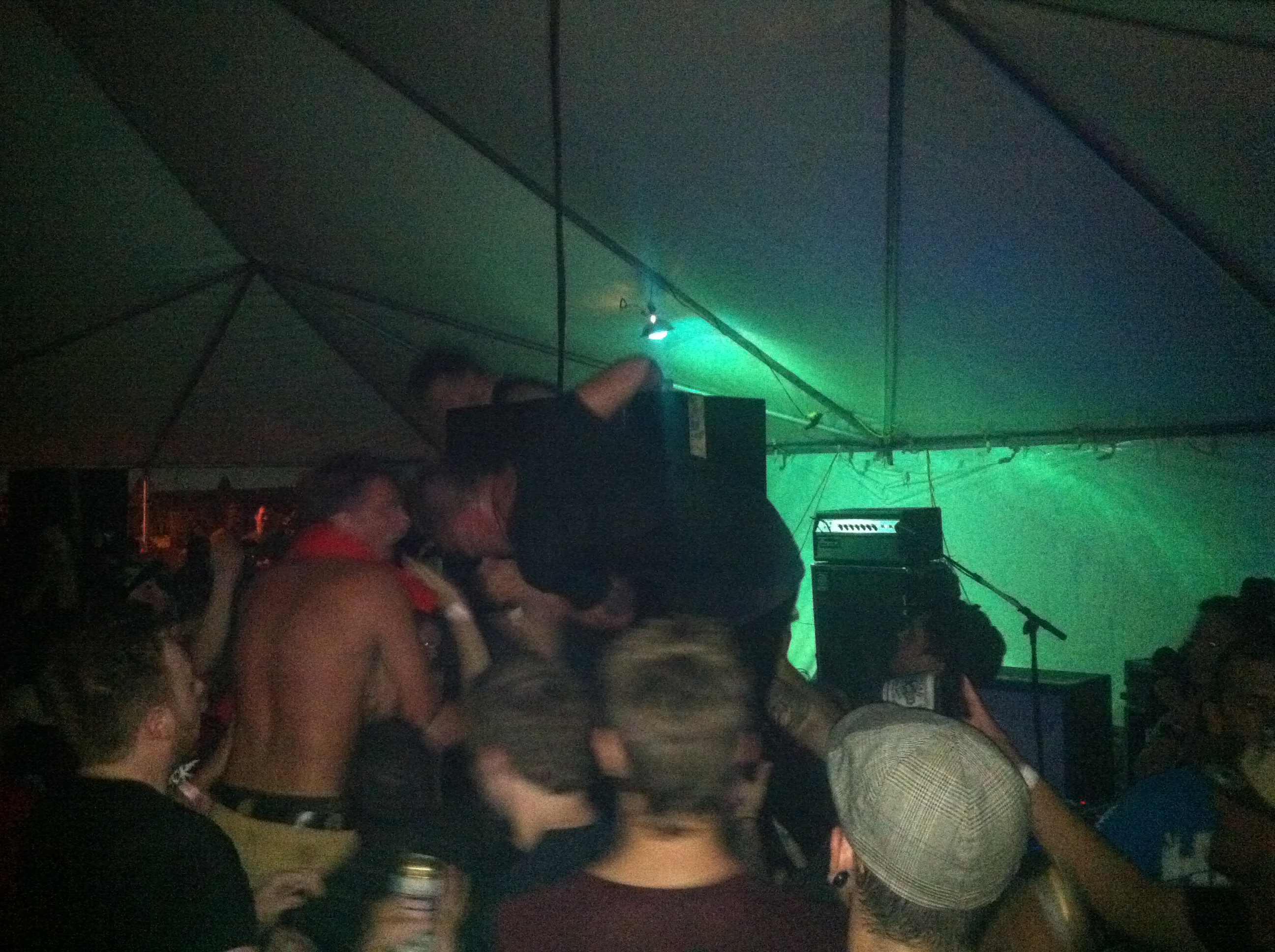 Ben’s hitting himself in the head with his guitar; now I know where that scratch on his forehead came from. People are limping away from the pit. The band has won, everyone else is a bunch of pussies.

The last hurrah is ‘43% Burnt’, where everyone seems to look up to sing those opening words in unison, as time slows down a bit. And then after nearly an hour of unabated intensity, it is over. It’s 2am and somehow an empty bottle of Jameson is on the floor amongst the pit debris. 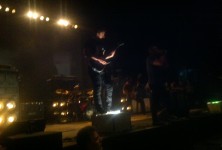