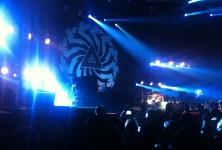 You never have a relationship with an album like you do when you’re young.

As you get older, everything you encounter is compared to what you experienced before it. There’s this sweet spot in every music lover’s life when they make a transition from things their parents or siblings listen to, to seeking out things on their own that make them feel a certain way. And it’s those bands that become the first loves, the first obsessions, that will always be ‘your’ bands.

Soundgarden was the last of ‘my’ bands to see live.

My musical ‘sweet spot’ was between 1992 and 1994, from the ages 12 to 14, also known as the years when Grunge was king. I first fell for Pearl Jam, then became completely obsessed with Nirvana, then it was Alice in Chains, and lastly, Soundgarden.

Though the first time I probably heard Soundgarden was during this Christian Slater film, it really wasn’t until Superunknown came out that I became obsessed. It released the day before my 14th birthday, the year that housed so many firsts for me; the year that I thought might be my last.

It wasn’t ‘Spoonman’ or ‘Black Hole Sun’…those tracks were for the jocks who thought liking these songs made them cool because they used to play rock music on the radio. It was every other song. Superunknown is one of those albums where I know every crevice, because I spent so much time listening to it in a dark room with candles lit trying to see my future, find something to hold onto.

Remember when you were a preteen and you were trying to figure out who you are? Perhaps I took that a little too seriously. I hated who I was and where I was so much that I tried any way to escape. I grew up way too fast, way too quickly. And then Kurt Cobain died. And then I almost died.

Grunge produced some depressing music; to me, listening to it meant we were commiserating. Superunknown is about suicide and substance abuse. At 14 I already understood that the world is a miserable place, that gene in my family that causes depression was already telling me that life sucks. It was at 14 that I realized that darkness would always be part of my life; I saw a long bumpy road ahead that I wasn’t sure I wanted to follow. So while other kids were at soccer practice or shopping or at the movies, I was in my room making paintings out of candle wax listening to Chris Cornell sing, thinking about escaping, forever. 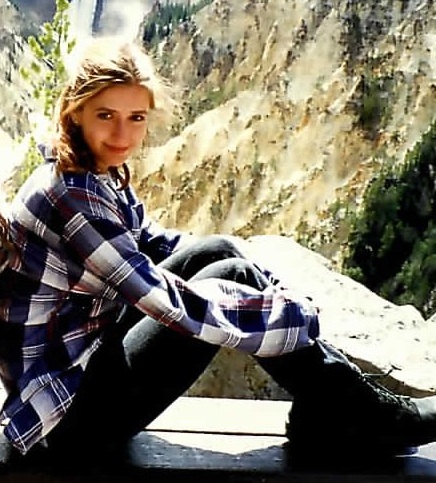 Cornell’s voice is one that reaches deep into my soul. The first time I was able to see him live was with Audioslave, and I’ve seen him many times solo, even on the Scream tour. So for me, finally seeing Soundgarden became more about seeing Kim Thayil and Ben Shepard than Cornell.

In the week approaching the show, every time I thought about it I got knots in my stomach. It’s like I was going on a date or something…I had been waiting 17 years to see Soundgarden. 17 years! When I listen to music, I envision the band playing it on stage just for me. How many times had I thought about this over 17 years? How many versions of me had sat in the pretend audience in my head, listening to the same songs that came into my life like an invisible friend when I was 14? 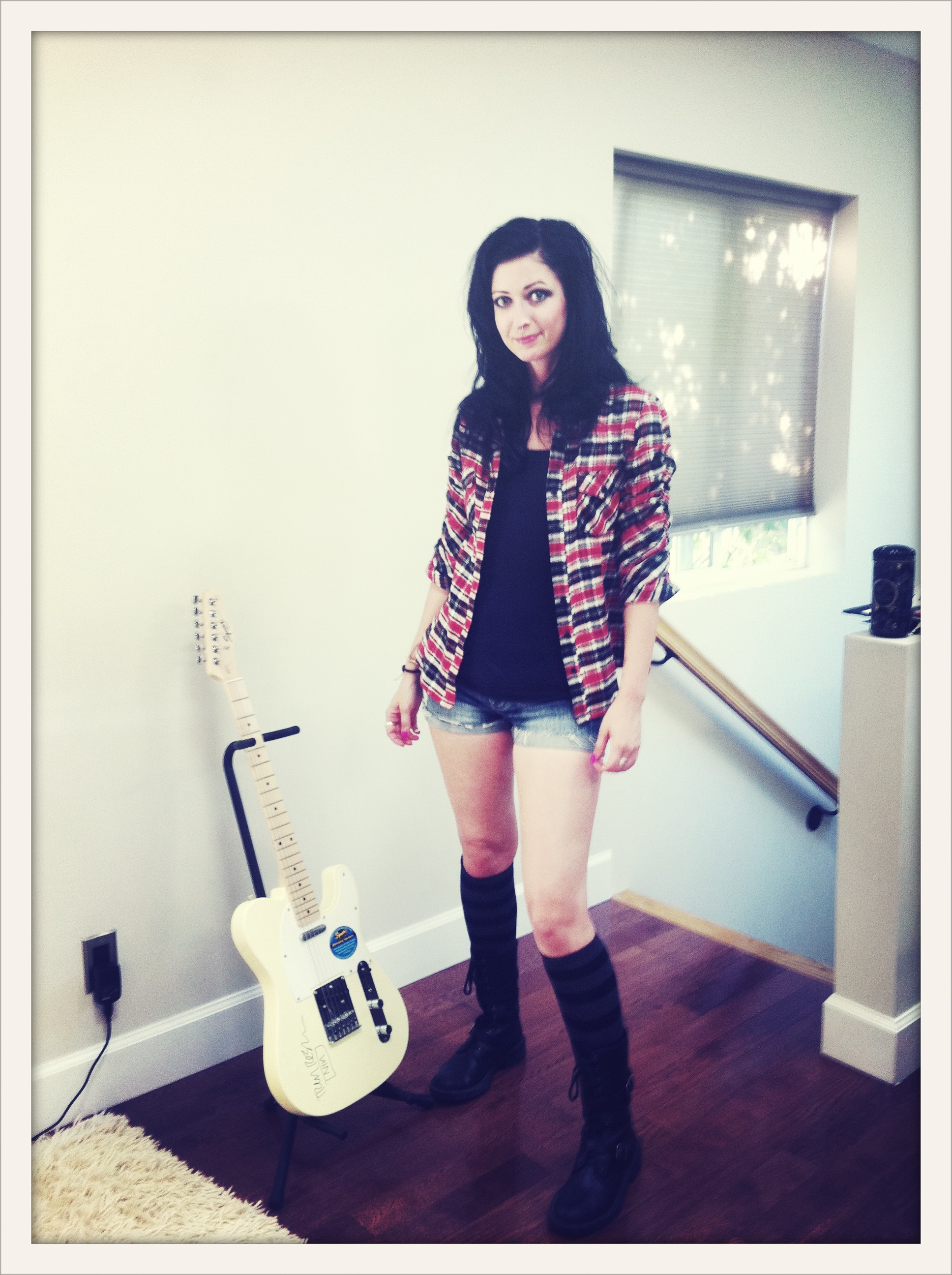 I was dressed like I did when I was 14 as we drove down Crenshaw and over to The Forum. I was with some of my closest friends as we entered the dated looking stadium that I’d only been to once before for a NIN show. The Mars Volta are already on stage and the Texas boys are creating a ruckus as the venue is still filling up. I’m not intimately familiar with TMV but I really appreciate how they’ve captured the younger audience who are going to keep rock alive. Sure it gets a little jammy at times, but you can’t deny the sizzle in Cedric’s shimmy and that Omar’s playing seared my ears. I’m pretty sure they covered Roky Erickson’s ‘Two-Headed Dog’, unless I was having a flashback to Austin Psych Fest.

The soundtrack between sets was Spoon and then Iggy Pop came on right before the emblem from the cover of Badmotorfinger lit up the back of the stage and the wait was over. I couldn’t think of a better way to open than with the bizarre track ‘Searching With My Good Eye Closed’. “This is my good eye. Do you hear a cow? A rooster says…Here is a pig. The devil says…” It perfectly nailed the transition from kid to adult that Soundgarden was my soundtrack for. Everyone reached their hands in the air screaming “TO THE SKY!!!”

Sweet! We’re getting ‘Spoonman’ out of the way early. In an odd coincidence, my friend had just given me back a spoon she had taken from my place (no, it’s not a heroin spoon), so I realized I had it in my bag and waved it in the air to entertain myself during the song. PROOF I’M A WEIRDO: 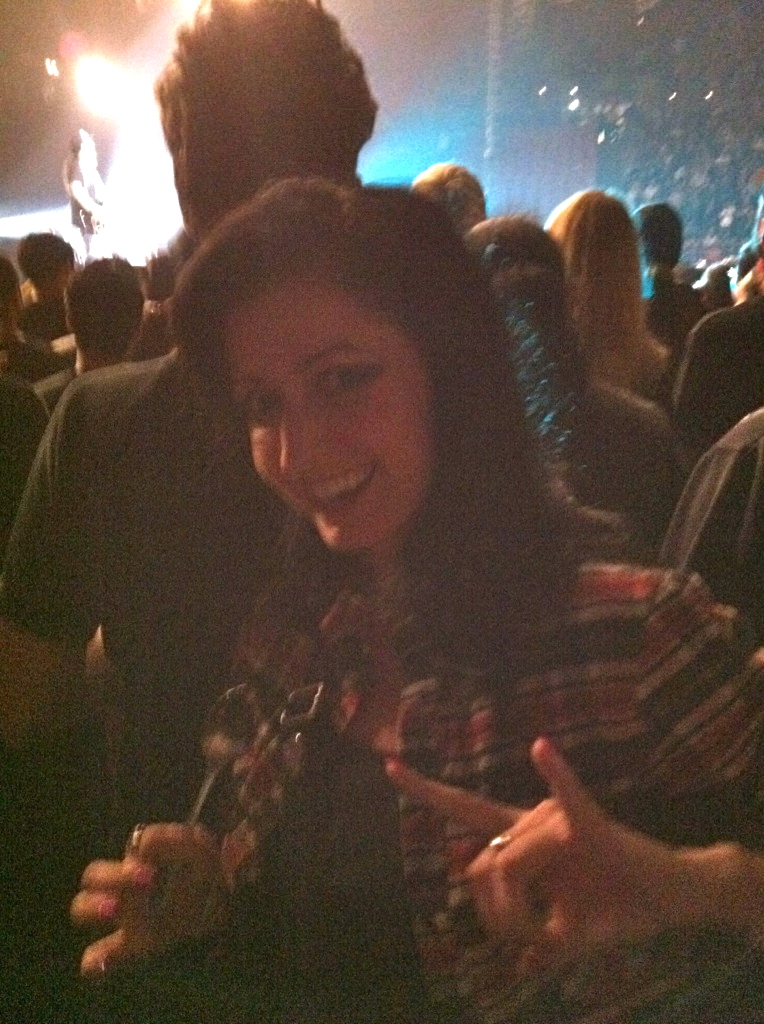 Reaching way back in the catalog for ‘Gun’, I got to see Shepard’s weird bass moves. ‘Jesus Christ Pose’…a song I’d heard Cornell sing outside the band only sounded right tonight, especially after a rant by Cornell on how religious organizations should pay taxes. When he splayed his arms into a crucifix my ovaries sang as I remembered the appeal of ‘Jesus Cornell’ back in the day before he cut his hair. Then into ‘Room A Thousand Years Wide’, and I’m starting to focus on Thayil and his guitar tricks. They’re subtle, in fact, the band is so subdued in their performance, it’s the most effortless thing I’ve seen in a while.

It was somewhere around this time that I caught something out of the corner of my eye. I turned to look by the side of the stage, and there was Jerry Cantrell, rocking out, wearing a white cowboy hat and shirt. And there, in the expanse of the Forum in LA, in the company of members of SG, PJ, and AiC, (UPDATE: and Nirvana, apparently) was my full circle moment: 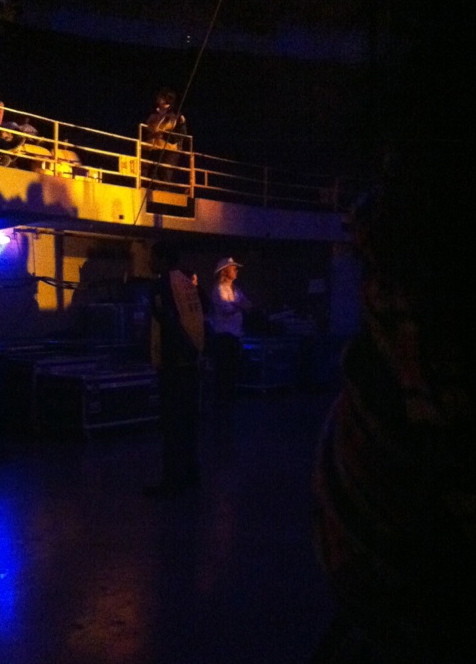 “Blow Up the Outside World’ is one of their popiest songs…but the message is something we all understand. Then we went back into old territory with ‘Loud Love’, ‘Big Dumb Sex’, and ‘Ugly Truth’. ‘Fell on Black Days’…how many times have I heard this song, put it on on black days? ‘Flower’, the first song from the first album, Ultramega OK. Cornell tells us that they have all these new songs, but for this tour, it’s about the old ones. ‘Outshined’, a classic SG sing along…”I’m looking CALIFORNIA…I’m feeling MINNESOTA” I’ve never understood this lyric, it makes me laugh. I was happy to hear ‘Black Rain’ live, the new song from that horribly covered album Telephantasm. ‘Rusty Cage’ is another one I’ve heard Cornell sing before, but I still love the way the song revs it’s motor and builds the lyrics like blocks. ‘The Day I Tried to Live’ lyrically may be the Soundgarden song that touches me the most, the one that I sat there reading the lyrics for and completely understanding exactly what it’s saying between the lines. ‘My Wave’, the ups and downs of life….’Burden In My Hand’, a beautiful, pop rock song…’Black Hole Sun’, the song with that trippy video that permeated pop culture overnight.

Hearing ‘Head Down’ was one of the highlights of the show for me. It’s one of my favorite sounding SG songs, and the way it came across live gave it another dimension for me. ‘Superunknown’ was performed with PJ’s Mike McCready on guitar (my fingers were crossed for the special guest to be Cantrell)…who was more of shredder on stage than I expected. The main set ended with the sludgy ‘4th of July’, another one of my favorite sounding SG songs, one I thought I’d never hear live, because they rarely played it ‘back in the day’.

The absolute highlight of the show for me was the first song of the encore, ‘Beyond the Wheel’, which is another one of my favorites that I’ve watched performed live on YouTube to satiate not being able to see them perform in person. I had noticed on some other songs that things were changed to fit Cornell’s aging but still amazing vocals. However, he hit everything in this song, which is in a tough range. I don’t know if the song comes in the encore because someone kicked him between the legs backstage to reach those notes, but it brought tears to my eyes. For a moment I forgot we were all old, and the mysteries of the future these songs held for me at 14 flooded back. At a time when my world was the size of my bedroom, the way the carpet felt when I laid on it, next to the foam of the JL speakers that a cat had frayed by using it as a scratching post. The way the volume knob felt to turn and the way red candle wax had left a stain on the wood at the top of the cabinet. How incense burned in the corner to cover up everything, how posters of the 27 Club lined the room, how the ceiling had glow in the dark stars on it. The window panes seemed like bars in a jail cell; I just wanted out of that small town. How I would have these waking dreams of what it was like to be closer to the music, because the only way I could get close to it in those days was traveling deep inside my mind. And then my mom would call me downstairs for dinner.

Somewhere in my 15th year, I learned to embrace the darkness, and moved on. 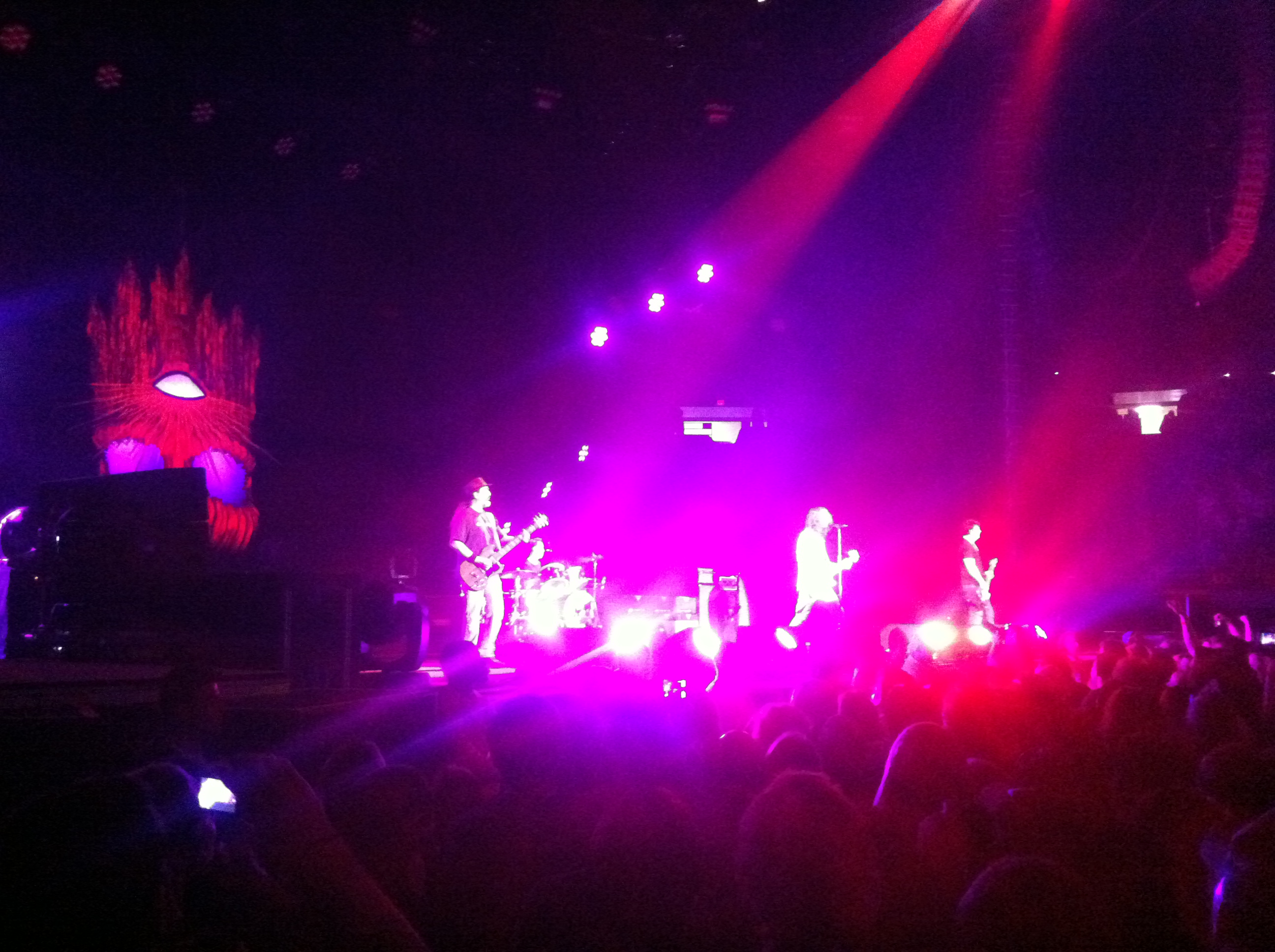 ‘Mailman’ and ‘Slaves and Bulldozers’ finished the show and my trip down memory lane. As Thayil and Shepard remained on stage to send waves of distortion throughout the crowd, Shepard gave his bass one nice whack against the amp, splintering it into many little pieces.

Our bodies may get older, but the teenage angst still fuels those of us who made it this far.

“I woke the same as any other day
Except a voice was in my head
It said seize the day, pull the trigger, drop the blade
And watch the rolling heads

And I learned that I was a liar
Just like you”

Stay tuned for Soundgarden Part 2, with QOTSA, Mastodon, and the Meat Puppets this weekend at The Gorge. 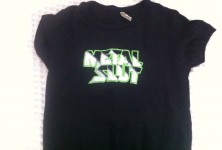 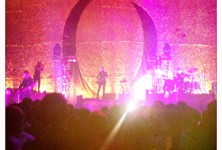