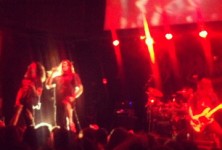 “Descending! Into madness
Sanity falling away
Nothing remains from the world you have known
Enter the realms beyond the gate”

For as long as I can remember I’ve been really into genealogy and the idea of nature versus nurture.

Before the internet and Ancestry.com, I used libraries to do research on where I came from. I think that, as an only child, I was looking for answers…something to identify with…since I grew up feeling like an alien in my household. That’s how I discovered my dad’s previous marriage, my great uncle’s murder-suicide, the fact that 75% of me is literally ‘Texan’ as most of my family were the original settlers, and how the other 25% is Lebanese. I learned that my great to the sixth power aunt defied our slave owning family to marry that famous president that was assassinated, and how my mom’s cousin went against family political lines by marrying that recently deceased member of that iconic American political family. From military men to a paint company to a sawmill to an oil company and a gun company…I come from a long line of left brained people. Where were the artists? And that’s when I spent several years trying to prove that I was adopted.

No such luck, though. But that didn’t stop me from making it a life long attempt to break the mold of what I was born into.

I think pretty much every writer whose subject is music fixates on a band’s genealogy. I guess you could say a band’s nature is where they form (think: Bay Area Thrash, Seattle Grunge, Norwegian Black Metal, Florida Death Metal), and their nurture is what the members listen to. It has been that chemistry throughout the ages that has propelled forward new genres, scenes, and sounds in decades past.

But when’s the last time that happened? The Internet has nearly negated this formula, and it’s been heralded by the press over and over that we’ve all but become a music generation of iteration instead of innovation. It’s all about genre hybrids and resurgences. I just got a call today about interviewing a metal-step band (metal + dub step). 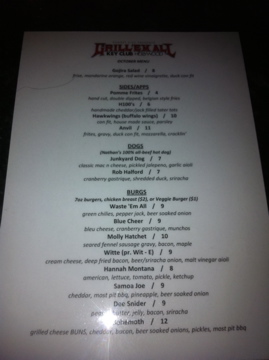 Thrash metal has seen the biggest revival, and tonight’s show would be the first date of one of those band’s first headlining tour.

My night began by driving by an LA icon on Santa Monica: Angelyne in her pink corvette.

The next thing I knew, I was standing in front of the Key Club with a couple members of one of the bands and someone from the original generation of thrash metal. A couple of kids walk up to us and ask us if we need tickets to the show. Suppressing a giggle, I shook my head ‘no’, as an older man wanders over after them. “My son’s in the opening band”, he says. “Have you heard of them?” After answering, he looks at me and asks if my friend is my husband, to which I reply, “no”, which resulted in him grabbing my arm and saying, “good, ‘cuz you’re kinda cute!” WTF, man…old man creepers LOVE ME…almost as much as drummers seem to.

After eating my feelings (a veggie Waste ‘Em All) the aforementioned son’s band began to play, to a crowd surely stocked with their family. These kids- who had to be in high school- looked right out of the ’80s metal scene…skinny jeans tucked into white Reebox. If only they played with as much energy as it looked like they put into their appearance! I didn’t live through the original scene, but it is kinda creepy when a look and sound is echoed so much today…it’s a little too early in October for costumes. 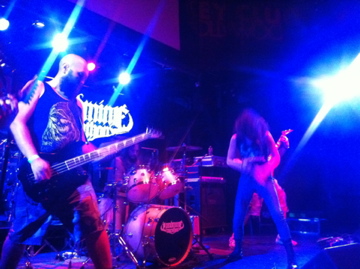 I wandered over to the Rainbow before coming back to see Landmine Marathon. I’ve been following this band for a couple years now, and the last time I saw them was back in December. It’s amazing that watching Grace Perry up there can have the same visceral effect on me each time I see them. This was the largest stage I had seen them on. They recently came out with a new album, Gallows, that is currently in heavy rotation for me. As people are still in the discovery phase for this band, I always love to watch the crowd convert around me. While I watched on, standing towards the center of the floor, I sang “ring around the rosie, pockets full of posey” to myself, as two guys galloped around me in the pit. Which kinda fit, since ‘Gallows’ is rooted in fairy tales. If only they would play my favorite track again, ‘Xenocide’…. 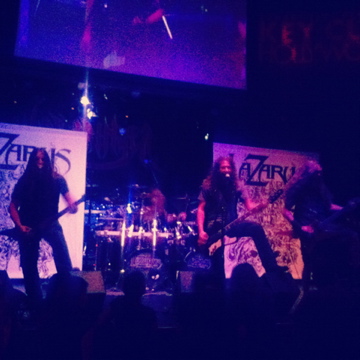 When Lazarus A.D. hit the stage, I realized I hadn’t seen them in almost two years. Also, kinda funny how I saw a band the night before who’s name has ‘B.C.’…perhaps that day equated to Year Zero! Anyway, Lazarus has grown up a lot in those two years, and by that I mean their headbanging is perfectly synchronized now…even the drummer’s! It’s been a while since I’ve seen that. They are from Wisconsin which completely validates my theory above. I think Lazarus have grown into a pretty solid sounding band, I just haven’t heard a song of their’s that has really hooked me. 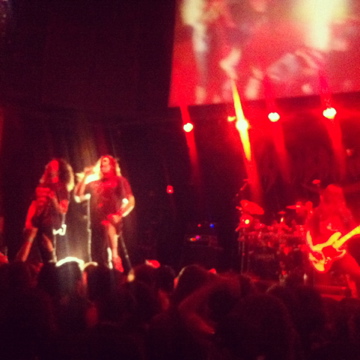 I remember the first time I saw Warbringer, also almost two years ago. The set was oddly introduced by an Angelyne-esque woman who was wishing happy birthday to her brother (?) and claiming this was her first speed metal show….it was all very confusing. For me, Warbringer’s enigmatic presence and well-crafted songs save them from being gimmicky. They not only sound like they came from the ’80s, but they look like it and the stage banter is very schticky…that could all equate to disaster if the Kevill/Laux combo didn’t completely kick ass and their songs didn’t get stuck in my head. Not only was it apparent throughout the night that the bands were hitting the ‘first show of the tour’ confidence bumps, but with Warbringer you could sense that they were probably a little overwhelmed that this was their first big headlining tour. They settled into it though, as their confidence was surely boosted by a packed floor of a slippery, swirling mosh pit. By the end of the set they had laid waste to the crowd, and I wandered back over to the Rainbow to close out the night.

As I drove home down Sunset, I thought about how I’ve watched these three bands grow over the years. I have a lot of love to give, and with pretty much no family in my life, and no significant other, I think I treat some of these bands like my imaginary kids, writing about them to show my love and support and hoping for their success. It’s interesting to reflect back on my years of doing this, and to see who’s done me proud. 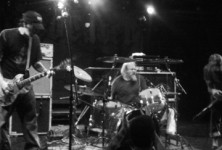 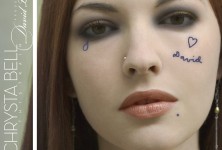