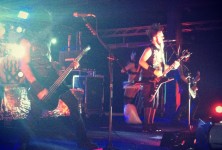 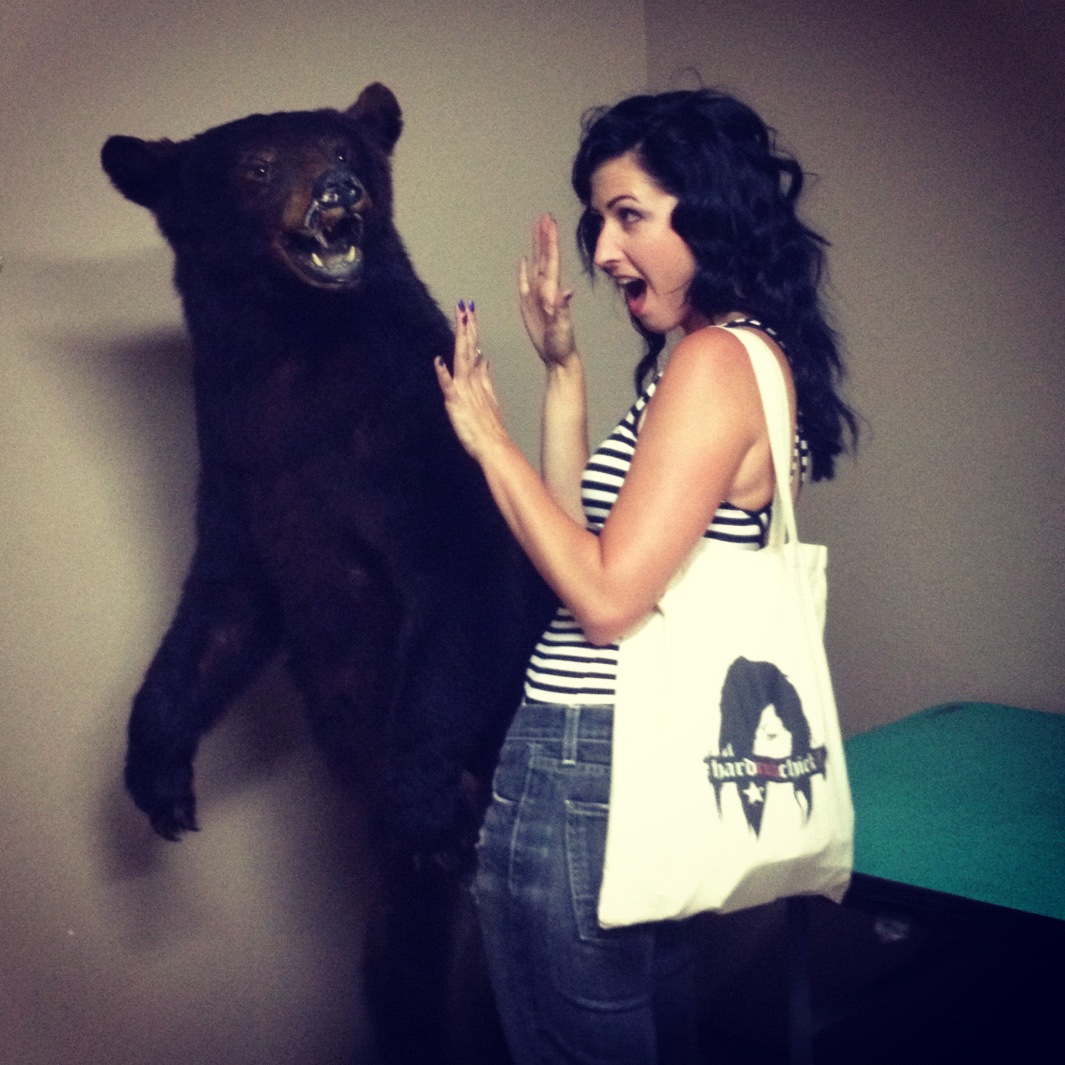 The evening began early, as I finally got to meet the Backstage Bear and then interviewed Wayne and Tera Static on the bus hours before the show. Then, after killing time at a local Mexican restaurant where I savored margaritas and guacamole and tres leches cake until my tummy hurt, we stumbled into the show. 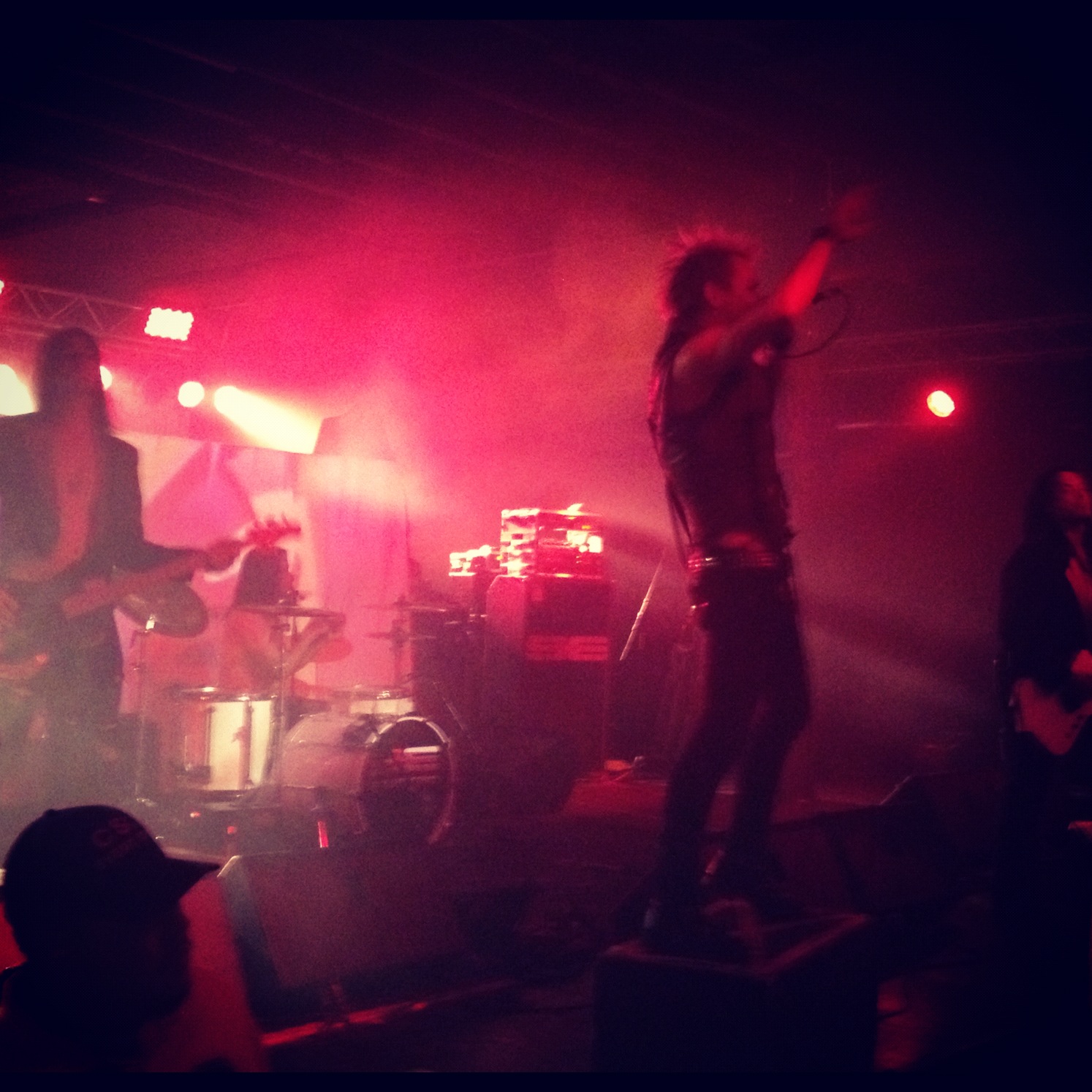 9 Electric are like young Billy Idol fronting a slightly popier version of Combichrist. Their catchy choruses and good stage presence had us pretty hooked for their set. Looking around revealed the odd mix that has always been industrial metal of the ’90s….goth kids in black and bros with their tribal tattoos and Affliction shirts. They may hate each other in school, but industrial metal is a uniter. I also saw more NIN shirts than I could count. 9 Electric introduced one song by saying that Wayne Static sang on it for the record….teasing that he would come out which got the crowd very interested, but turned it into a pitch and threw a CD into the crowd. For the final song, the vocalist revealed his bum, and just pranced around the stage with it hanging out til the set ended. This would be the first of two instances of nudity that night. 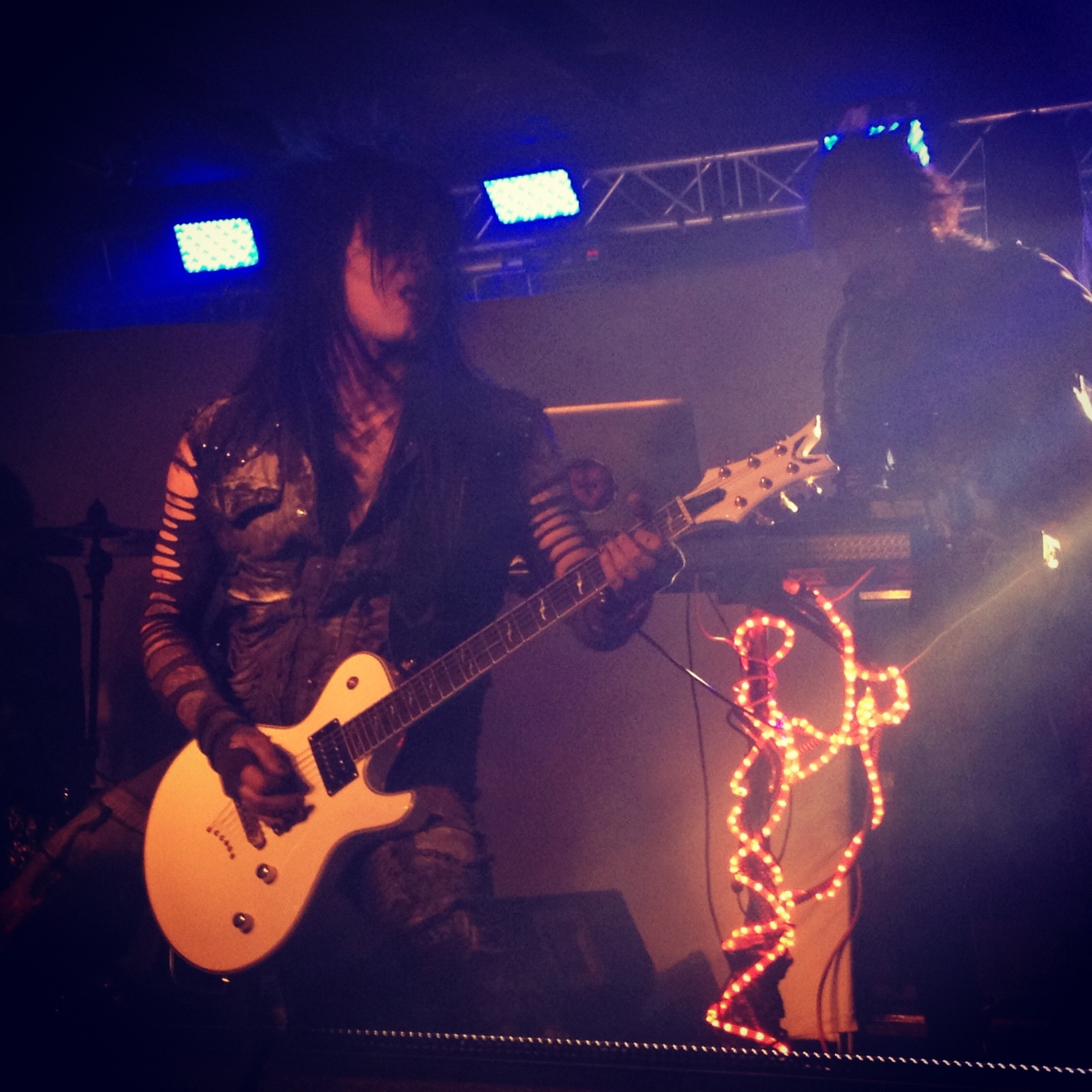 Up next was Davey Suicide, a band in the same vein as the very popular Black Veil Brides. With their very strong aesthetic and sound that was a definite echo of Manson and Static-X, they brought a unsuspecting positive message that was woven in between songs. First we were told an anti-suicide message, and later a rant against celebrity worshiping. I appreciated that their drumhead sported something like “Unholywood, Killifornia”. I used most of this set to rehydrate, wonder why it was so hot in an air conditioned building, and ponder how they weren’t melting in full SWAT/dominatrix gear and makeup.

The place was full by the time Static-X hit the stage. As the bands from my high school days all start to re-emerge, I’ve found that they can be very hit or miss. Static-X sounded just like I remembered. I haven’t listened to the music in ages, so I was surprised by how many songs I remembered. I lucked out (well, some metalheads would disagree) to be the last generation to experience when rock and metal were mainstream; these songs were radio staples. In fact, from the little I listen to the radio…they still are in San Antonio. 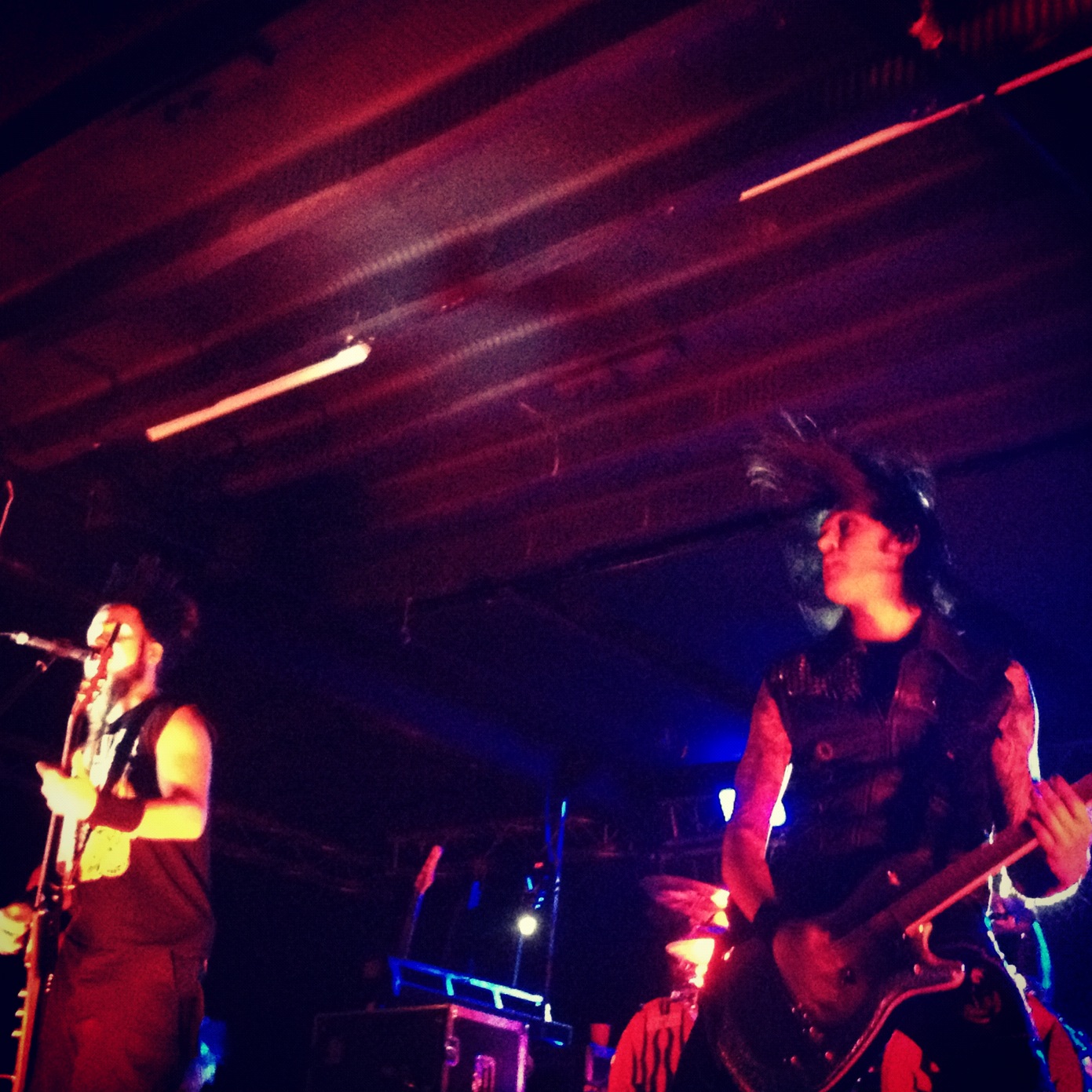 Wayne stays pretty stationary in the middle, focusing on vocals, guitar, and not ruining his trademark hair while the guitarist and bassist are in a consistent pendulum trading sides of the stage. About every third song, Tera would come out and dance in a raver getup, which quickly downscaled to being shirtless with two strategically placed X’s. Fake boobs…always amazes me how little they move. Those two are like the industrial metal version of Perry and Etty Farrell…never apart. Not even in my interview.

Static-X balances the heavy with a groove. Wayne’s vocals are a gravely yell. Periodically, shots are taken, brought out by Tera, in merchandised shot glasses. Arms cross in an X, the drummers sticks do the same, and the crowd follows. It’s easy to see everyone become a part of the show. 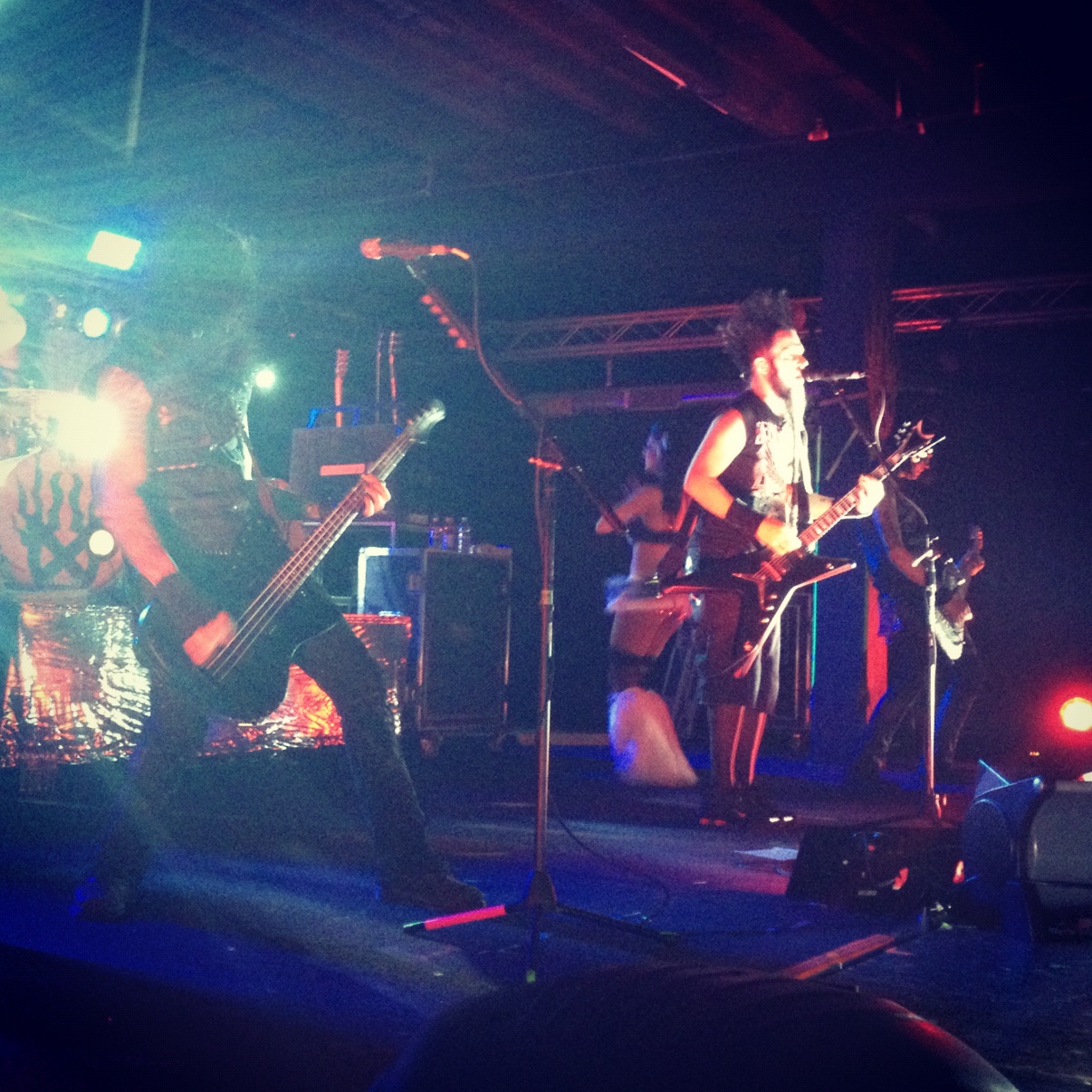 This set evoked a lot of buried high school/early college memories….especially when I ran into some of my ex-boyfriend’s friends. I’m sure my entire hometown thinks I’m some sort of groupie weirdo…but I’d rather them think that than be “the girlfriend”, which was all I used to be. Similarly, I never realized that being a blogger would essentially be like being in school again at times; where people always seem to find something negative to say about me. I try to remember that behind every vocal negative type, maybe there’s two people who actually enjoy what I do.

I watched people dancing and singing along, the goths and the bros…oddly together. I smile and watch, thinking about how Texas will always be here for me, mostly unchanged. 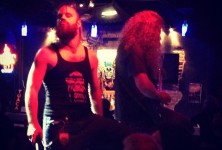 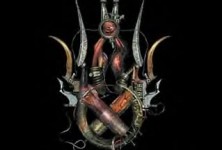