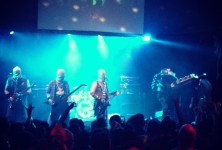 “Where’s the rest of your troublemakers?”

OK, you know you go to The Rainbow too much when The Bouncer recognizes your car and wonders where the rest of your crew is when you get out of it alone.

No trouble for me tonight.

I scurried off to the long line outside the Key Club, where a fatigued but oddly exhilarated me proved to be the most sober person on the Sunset Strip. I had been told that The Mentors were already playing, earlier than their published set time. Oh well, it’s not El Duce anyway…I’ll just watch YouTube videos and pretend. Plus, I’ve seen SHAT before.

As I walked inside, BeowÅ±lf were playing. I stood at the back of the room and spaced out. I hate going alone to shows like these; the metal/punk crossover crowd is always in big, unhappy families and it makes me feel especially awkward about being there by myself. Plus every girl that walks by makes a special effort to clock me with her bag/shoulder/drink….whyyyyy. 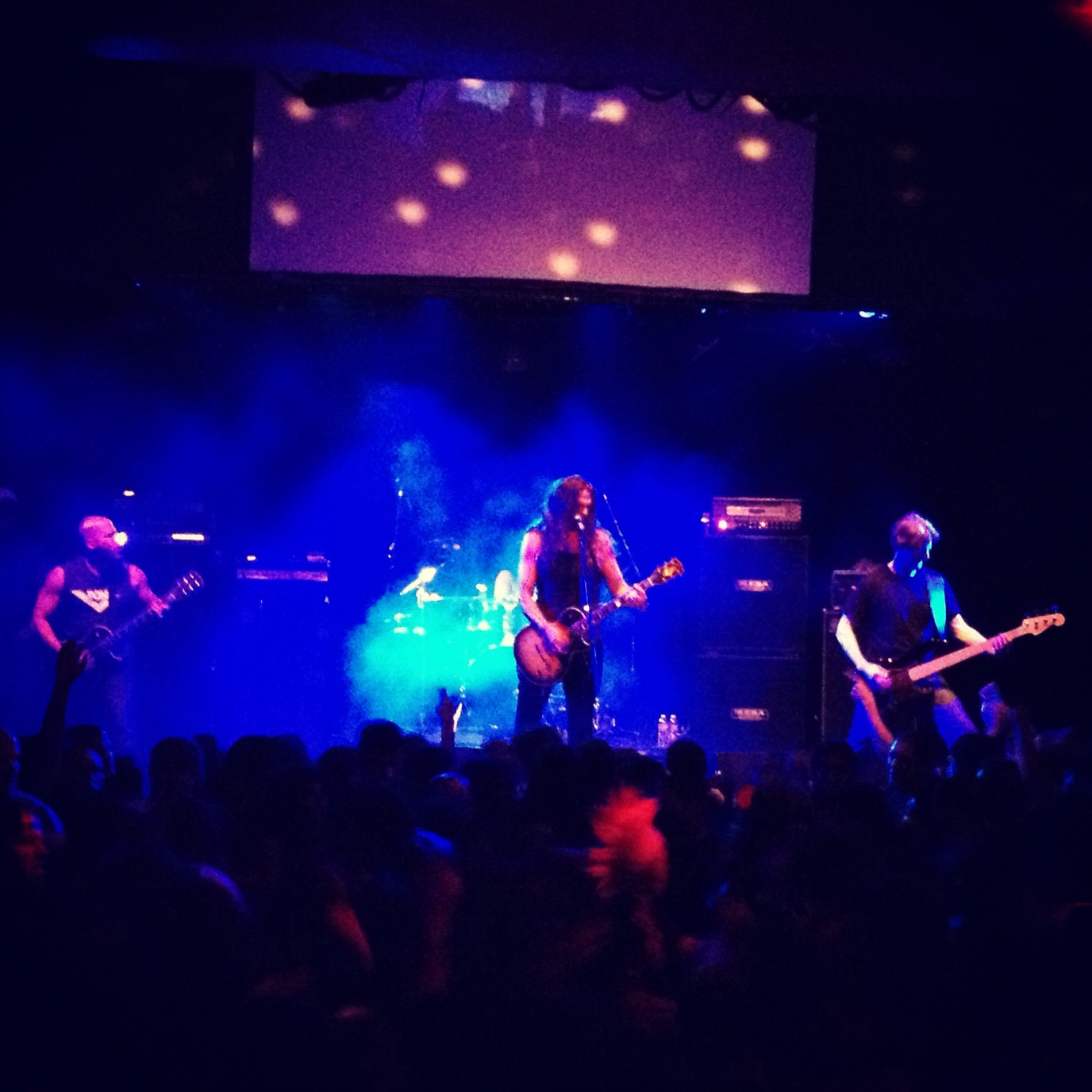 OK, no more whining because Dr. Know was next, and I could say something super cliche here like “it was just what the doctor ordered” but I…..oops. Dr. Know exudes an energy that can best be described as ‘this is what we’re about and who gives a fuck if you like it’. And as great as they sounded on that stage, the crowd going bonkers was capturing my attention a lot. To watch that survival of the fittest play out, not to mention the people crawling on stage becoming videogame-like as security would nab some of them by the back of their pants and either drag them off to the side of the stage or push them back into the crowd from which they came. Their foundationally punk but nuanced in rock and metal music seemed to infect the crowd…and the halloween decor around the club made me feel like I was in a movie scene where the crowd was being slowly turned into maniacs by listening to this music. To seal the deal, they had the best parting words: “we played awesome….you had a great time.” 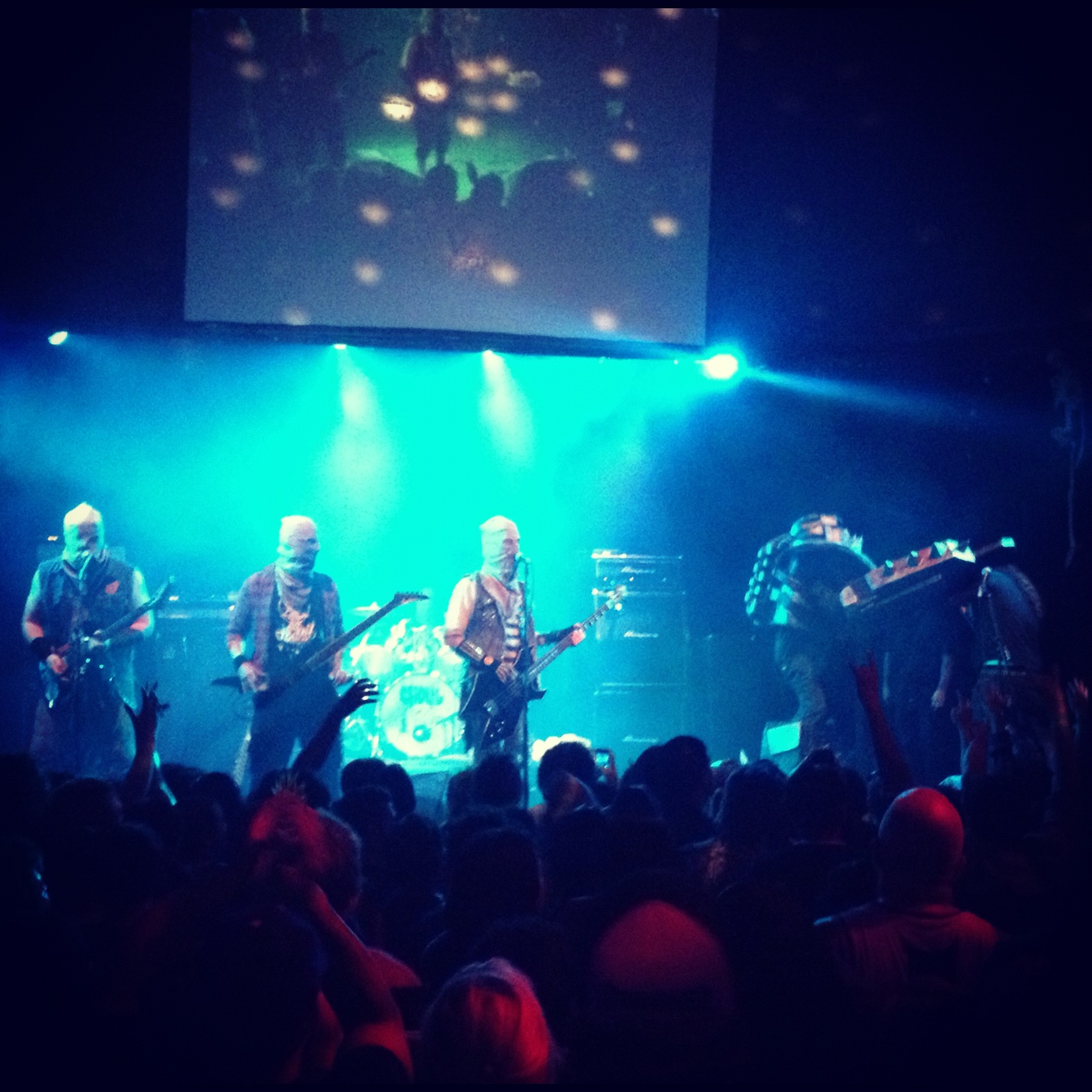 Ghoul brought back hot, fond memories of Chaos in Tejas. One where I somehow ended up feeding them…dead babies. Ghoul’s performance art meets “splatterthrash” meets stand up makes me giddy like a kid…even though I refrained from standing in the “splash zone” this time. As I watched Ghoul do their thing, the kids went crazy again. The security guards were getting fed up…and as one kid flat out pushed one of the band members while up there and got pummeled by security I thought we might have a Lamb of God moment.

But I have to credit the guy next to me with making this set extra rad for me, even though he got “the look” upon first tapping my arm (I have the best DON’T FUCKING TRY TO PICK ME UP DURING A SET ASSHOLE look you’ll ever see). He then nerdily pointed and said, “I just had to share…but see that guy over there?! That’s Sebastian Bach!!” My gut reaction was “so what dude!!” but then I looked at Killbot onstage and the bloodspatter coming towards the crowd and then back at the guy who sang “Youth Gone Wild” and then back at the crowd of crazies…and I started to laugh maniacally. Two totally different kinds of youths gone wild….Baz left the building shortly after.

As soon as the set ended I ran out of the building and jumped in my car and got the hell out of there, much to the confusion of The Rainbow personnel.

*If anyone knows where I can buy the Ghoul poster sold at this show please let me know!!!! 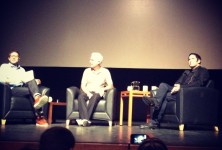