I took a wrong turn and am flying around the hills in an unfamiliar part of LA blasting “Over the Mountain”. I’m on my way to the world premier of the documentary about Randy Rhoads’ years in Quiet Riot, dressed in a bright red blazer and shoes with little bows on them in a tribute of sorts.

I’ve spent the last couple months thinking more about Randy Rhoads than ever before, between the beautiful coffee table book that recently came out whose author I interviewed, and this. Rhoads was long gone by the time I discovered who was playing those amazing guitar solos in Ozzy’s songs…some of the first metal songs I came to love. Tonight would be a great celebration of his life.

After an interesting lobby hang in the Skirball Cultural Center, we filed into the theater. I’ve been to a few rock doc premiers now, but it’s still kinda surreal to sit near a row containing the likes of Zakk Wylde and Tracii Guns.

The documentary is almost more accurately described as the origins of Quiet Riot story, with a few Randy Rhoads specific elements. And beyond that, it is a fantastic time capsule of the late ’70s LA rock scene. Beyond understanding the band’s story and each member’s place in it, I was transported to a time when rock music was having growing pains….kind of like it is right now.

Quiet Riot fan club president Lori Hollen was sitting across the aisle from me, and in front of me must have been several of the girls featured in the gig and party photos and footage. I say that because those girls kept hollering and whooping upon seeing themselves as if they were right there back at the show. I have to say, a part of me felt a kindred spirit to them. I had a weird future perspective moment or two watching them get so excited to think back on these “best times of their lives” with their favorite band…because that’s what my whole life has been about these past few years: supporting my favorite bands.

A couple of the best parts in the film were the Randy Rhoads vs. Eddie Van Halen segment, and the record label protests to get Quiet Riot signed. Also, seeing all of those crazy Quiet Riot costumes was hilarious…I mean….wow. And then hearing about the typical Randy Rhoads guitar solo, “Laughing Gas”, from his tech was pretty cool.

After the film, there was a Q&A with the crew and some of the interview subjects. I’ll reiterate here that Q&As when there are fans in the crowd can be kind of awkward. Hearing his ex-girlfriend talk about their first dates was as sweet as it was sad. Grover Jackson, founder of Jackson guitars, was in attendance, and it was pointed out that Randy inspired the first Jackson guitar. The final question was from Zakk Wylde, who asked about how it felt to go see Rhoads play with Ozzy once they first came around to LA. It was interesting to hear them say how, even though Rhoads was universally deemed an amazing guitarist during his time in QR, they said he really flourished once he went to Ozzy Osbourne.

As I left the screening, it was pouring down rain. Due to construction, I took a wrong turn and ended up on a weird trek down Mulholland Drive….which was fine, because the night spurred so many thoughts about how precious it is for me to see the bands I love, because you never know when you might not get the chance to anymore. 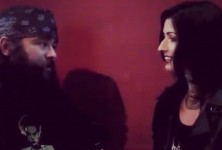 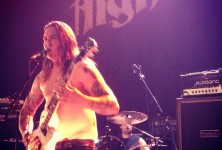