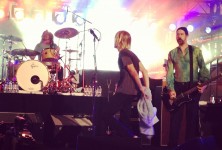 In 8th grade, I slipped into a deep depression that would haunt me on and off for my entire life.

It was the year that I stopped listening to music and started experiencing it. Something deeper, something more profound was at play. You know that scene in Almost Famous where Anita leaves a note for William on The Who’s Tommy and tells him to listen to it with a candle burning and he’ll see his entire future?

My album was Nirvana’s Bleach.

At 12 years old, I knew it was going to be a bumpy road. I’d experience the darker side of life; the things that were dripping from the lyrics in that album told me I’d see things I couldn’t unsee, feel things I couldn’t unfeel. In my bedroom, I created myths that would become realities.

Perhaps that is where my abandonment issues began, but the person who planted these seeds deep within my brain had blown his out. Ages 11-14 are a pivotal time in developing self-identity; at 14 years old, my rock star became a martyr for my disillusionment. 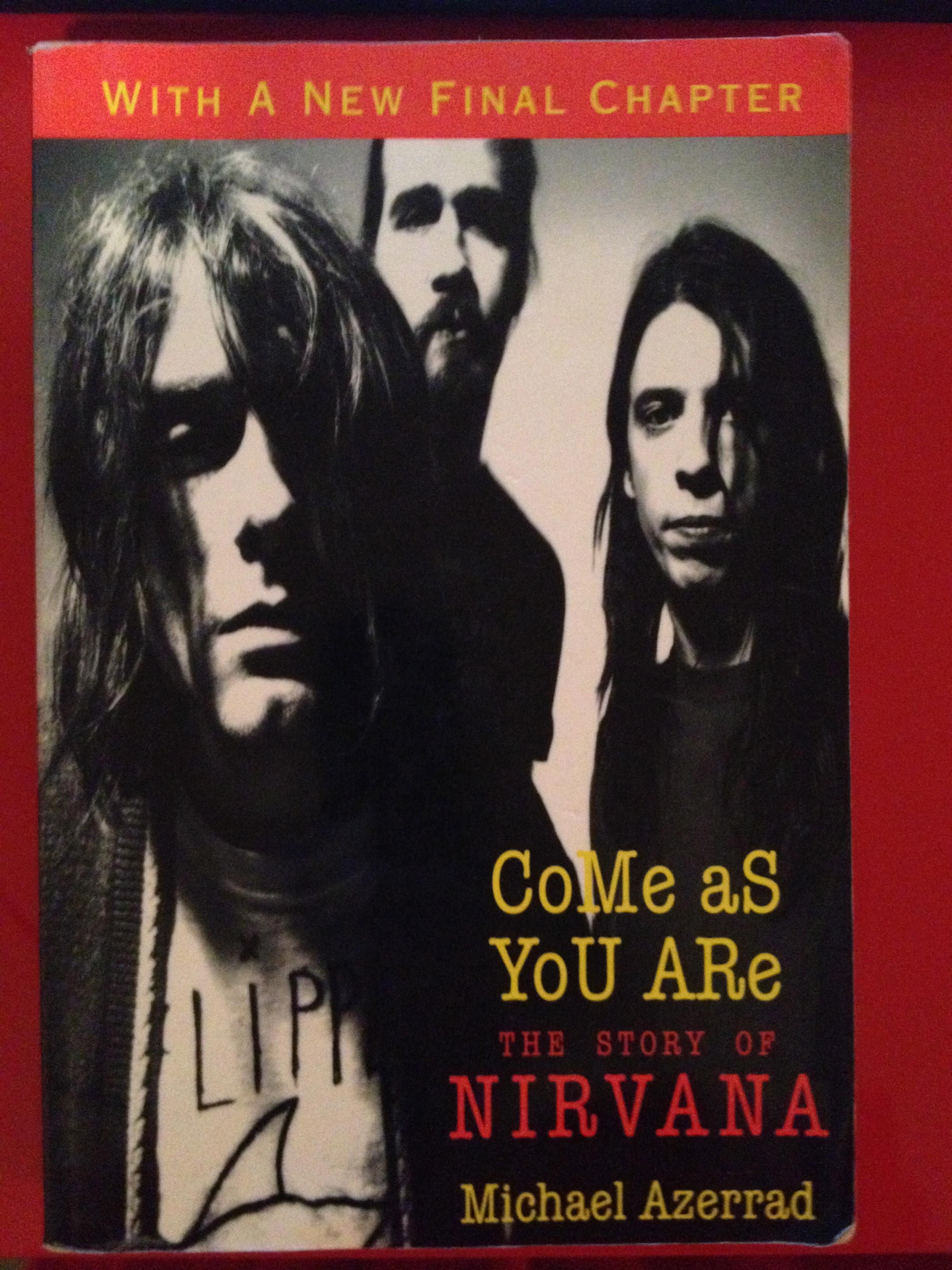 I read it from cover to cover, and then re-read it. The way the top reads “With A New Final Chapter” is so grim to me. It’s not the best book ever, but it made me think. It made me think…

That was almost 20 years ago.

Today I received that book in a box from storage. Which is timely, considering last night I walked down the street and got to see what’s left of Nirvana play a free show for Jimmy Kimmel.

It was much more than that. The Sound City Players is essentially the Foo Fighters featuring several prominent rock icons, stemming from the quite excellent Sound City documentary. And the basis of that documentary is the soundboard that recorded Nevermind…which was, as for most, my introduction to Nirvana.

I hadn’t waited in line for a band for a long time. I sat there, in ripped jeans, a flannel, long underwear, chucks, too much eyeliner, and a necklace of a moon and stars that I’ve had since I was a child. It was my high school uniform. I happened to be waiting directly across from Hollywood High School. Can you imagine going there? I mean, a high school band there is probably better than most other bands. As I laid my head against the chain link fence and stared at the kids sitting on the bleachers, listening to music in my headphones, I thought about how much I knew about the person I’d become when I was in high school.

Once we were led out to the stage, the experience became very surreal. Standing in the middle of Hollywood Blvd, with the Goodyear blimp swimming in the sky above, I was brought very much out of my head and into the moment.

We watched Dave Grohl be interviewed for Kimmel, and then were able to watch the show going on inside on a large TV. And then, finally, it was time for the show. 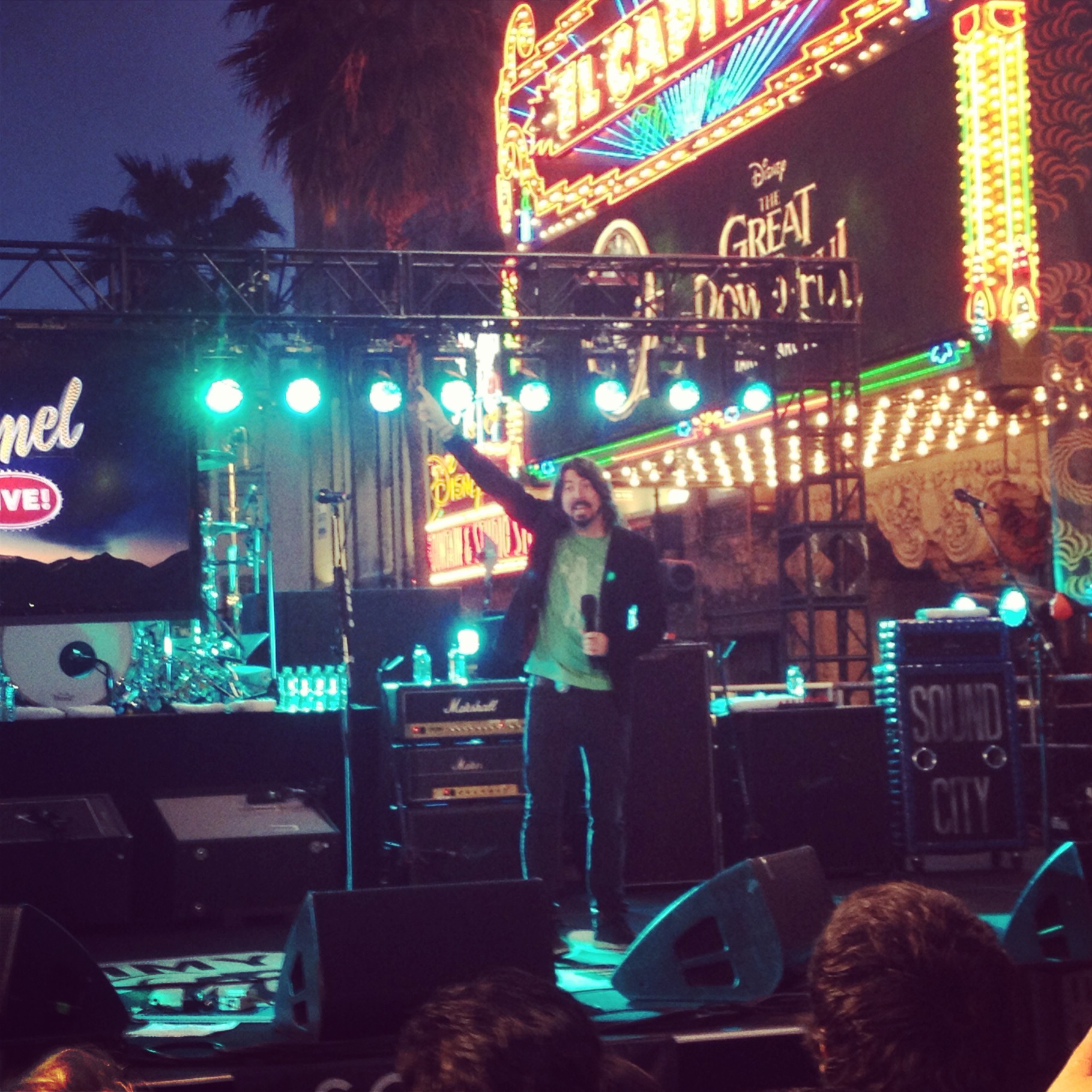 The first guest was Creedence Clearwater Revival’s John Fogerty. Playing through five tracks, including “Proud Mary” and “Fortunate Son”, it soon became easy to forget we were dancing in the streets. 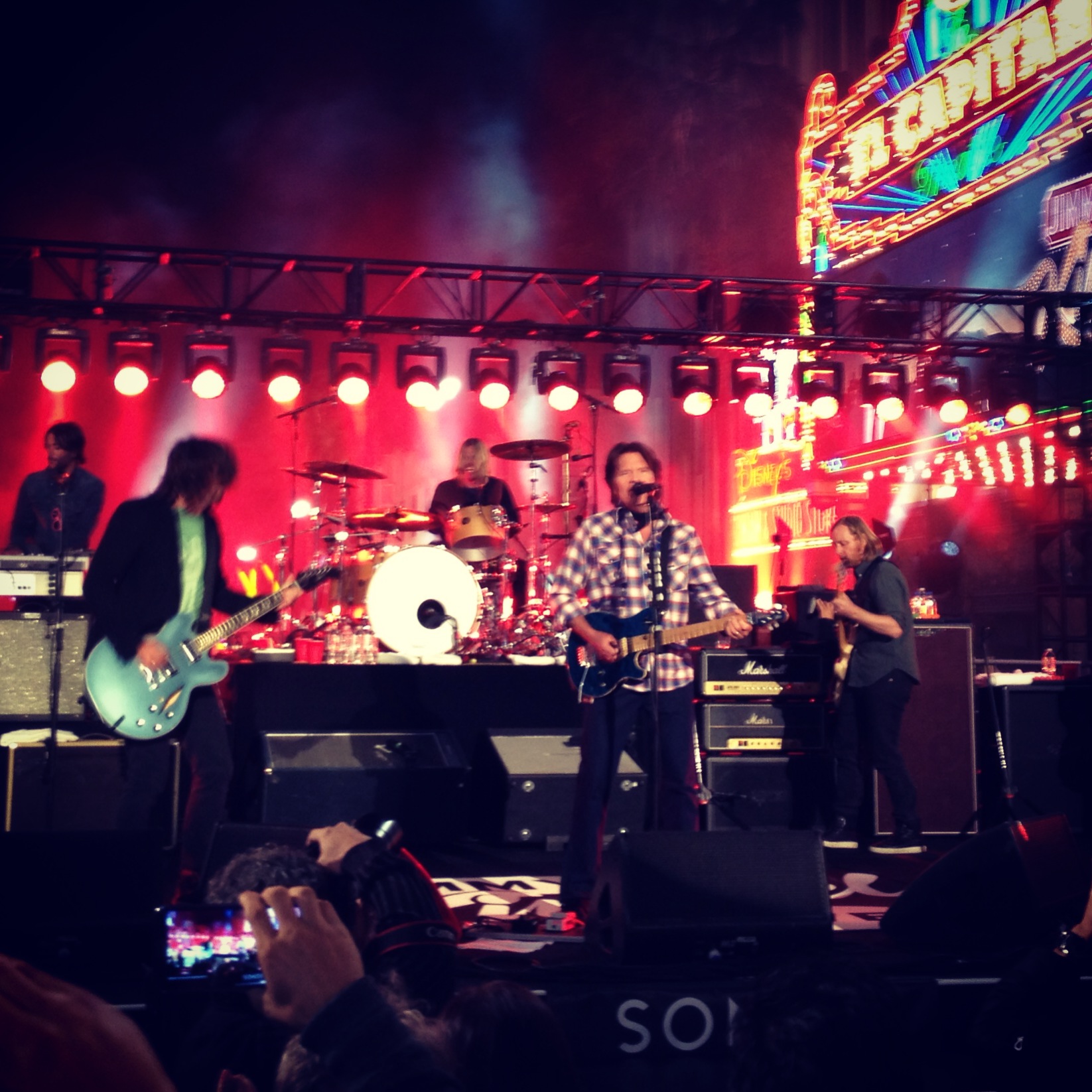 Next up was Rick Springfield. As he was standing there, Grohl motioned towards him and then mentioned Trent Reznor’s name…which made my heart skip a beat since I kept a little tiny eencee meencee bit of hope that maybe he would show up to this. I never thought I’d see Springfield; I thoroughly enjoyed his character on Californication. I can now check “Jessie’s Girl” off my list. 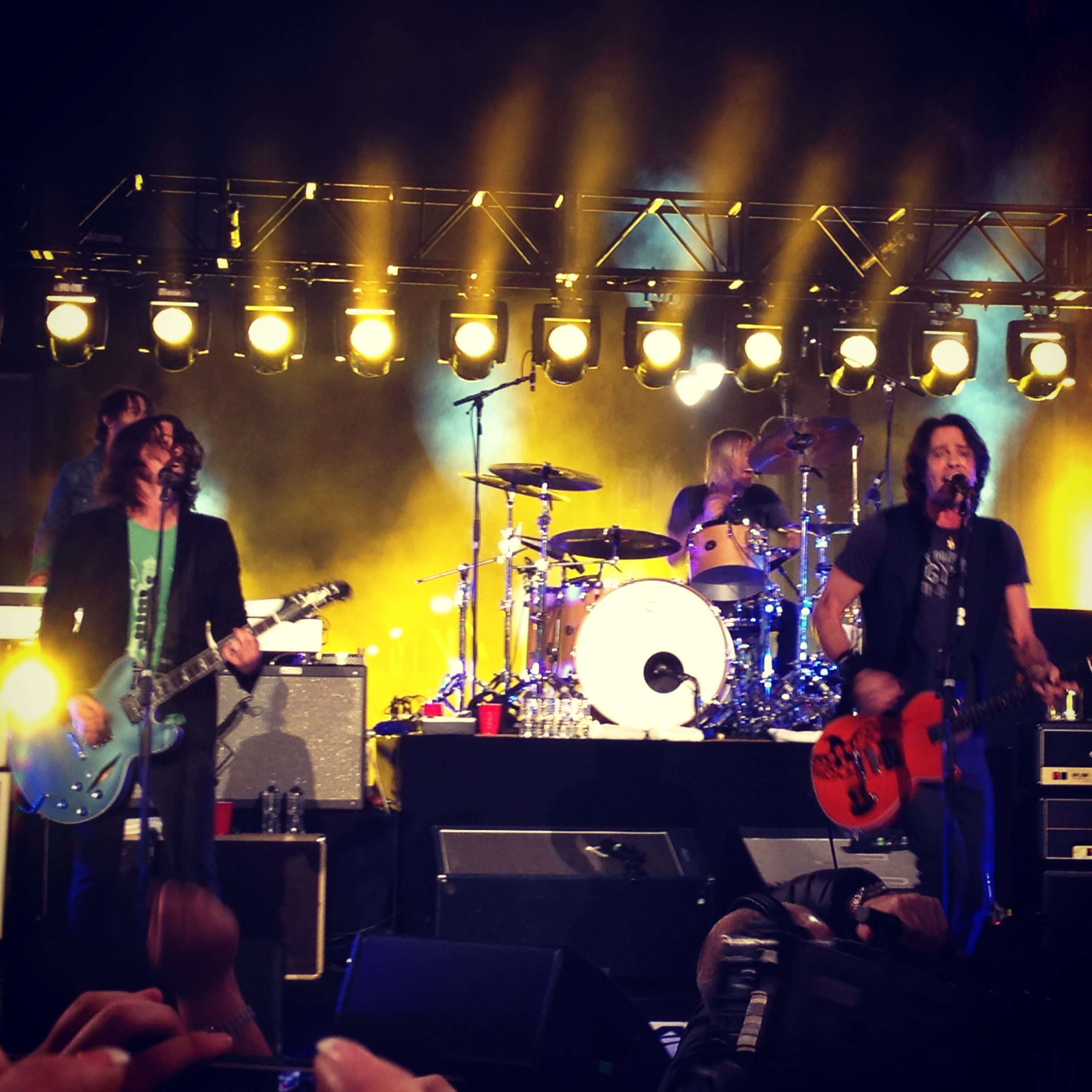 Lee Ving joined the bunch for my favorite part of the show…when it became a real concert. Laying down the Fear tracks, a pit began and several people up front split out of…fear. 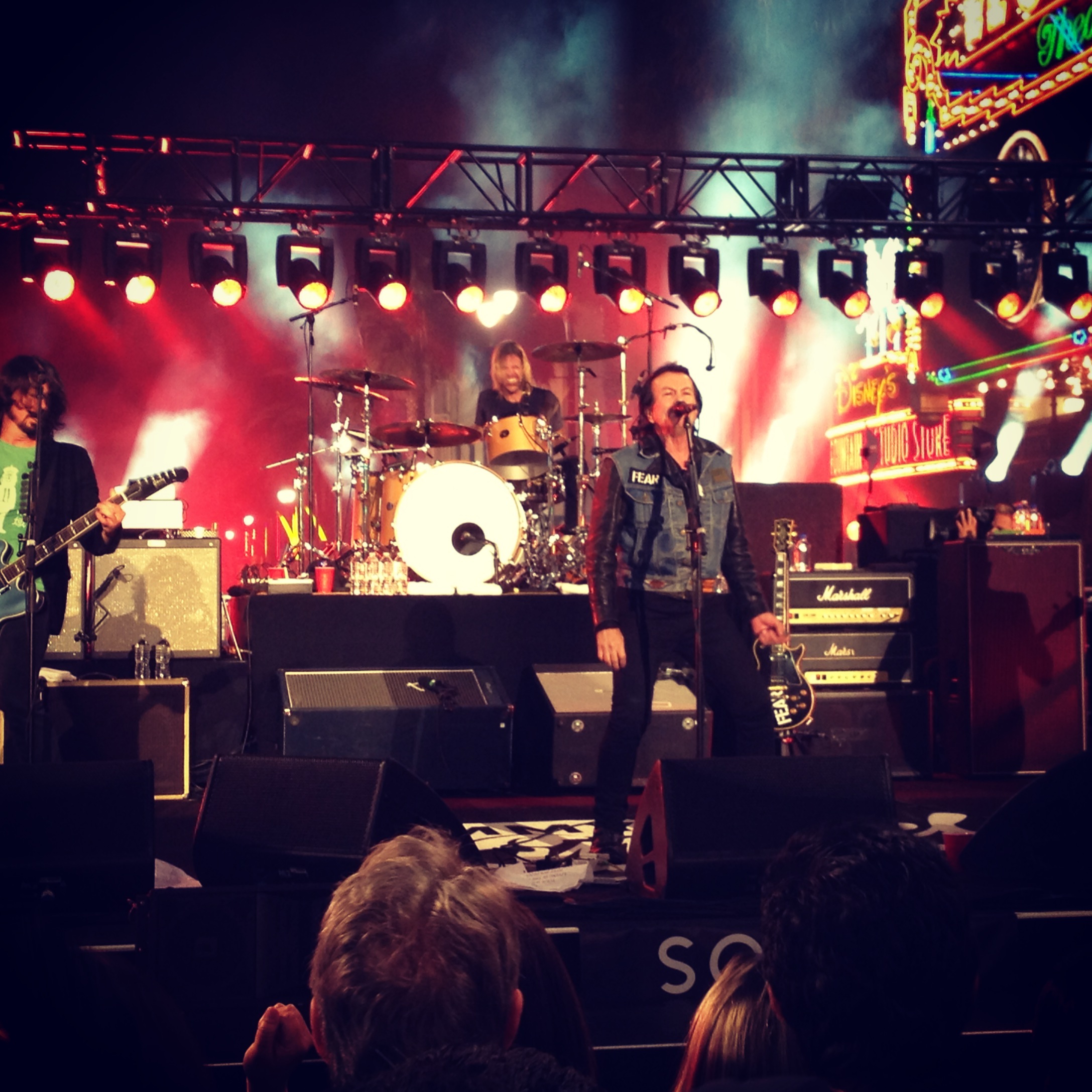 The last guest would be Cheap Trick’s Rick Nielsen. However, this would be overshadowed by the very tall presence of Krist Novoselic. When he walked on stage and Grohl sat behind the kit….I can’t even describe what went through my head. But that pales in comparison to when I looked at my phone after holding it up to snap a few random shots, and I had caught this: 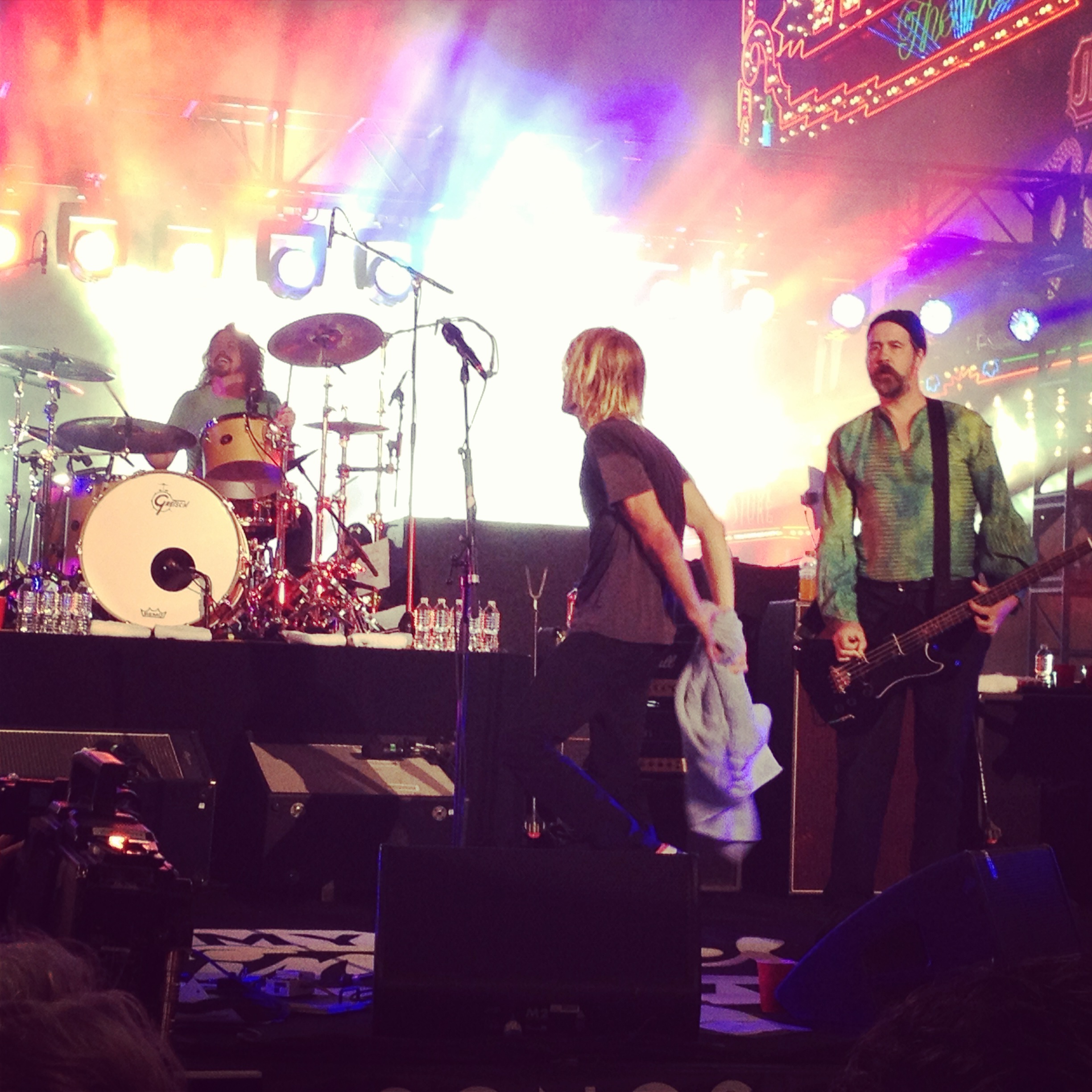 That’s Foo drummer Taylor Hawkins singing. But for a moment…just a moment….I felt the spirit of that rock star who reluctantly led me to this moment on Hollywood Blvd. I’ve spent my entire adulthood seeing pieces of the bands that made me love music.

I will admit, a little voice in the back of my head was pleading for just one Nirvana song. Even “Smells Like Teen Spirit”. Even with Pat Smear (when he joined Nirvana I had an inexplicable distaste for him)! But it’s sacred territory.

Living in Hollywood is amazing. To be able to walk out my door and go to a free concert with some of the world’s biggest rock stars is an unbelievable benefit to living here. And somehow I knew, at 12 years old, that I’d be living in this music epicenter one day, tirelessly searching for something.

Just a few days shy of my 33rd birthday, I turn to Bleach again. I’m reaching the end of the future it once showed me. 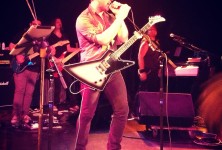 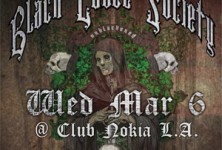