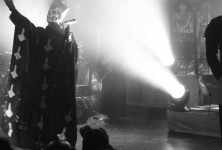 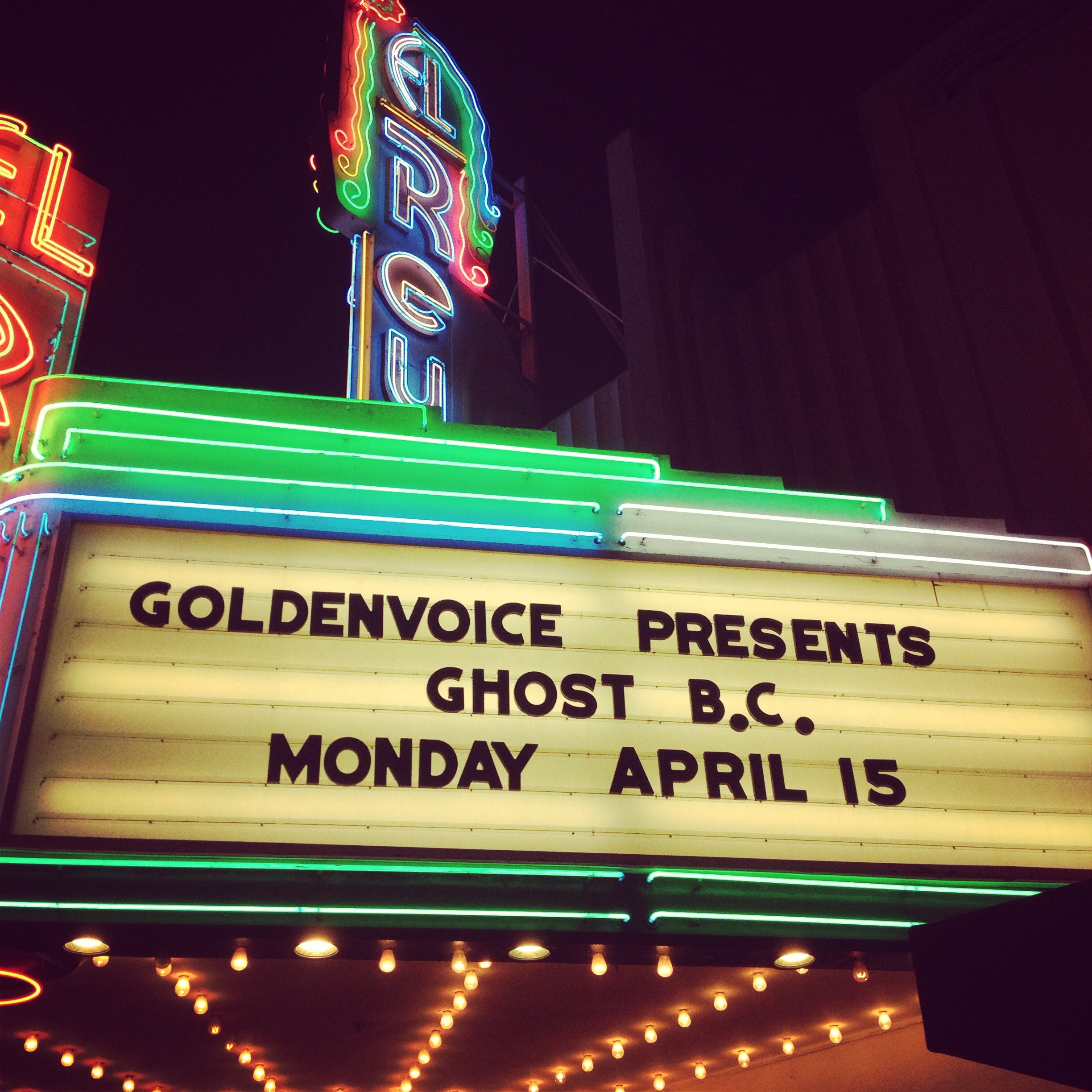 That is not how I expected to start this piece…but after valeting, standing in a line in the cold wind for a few minutes, and admitting defeat…we found ourselves in a cantina with an impressive drink special. Next thing I knew, we were stumbling down Wilshire professing our love for Papa.

Some call it a gimmick, others, a breath of fresh, incense-laden air. But for me, Ghost (B.C., whatever) captures what I can imagine it was like in an era where rock stars were a mystery. It’s interesting that, in today’s terms, that means wearing a full costume to conceal your identity and constantly being in character. But it’s the speculation that breeds interest, and even though we all are there for the music, we have a good joke going amongst us about how much we dig on Papa; someone who most people would find…repugnant.

If this were your first Ghost show, I could see how you might raise an eyebrow, especially at the new songs from their hot-off-the-presses sophomore album, Infestissumam. The tracks are much more melodic; metal being a distant memory in their DNA. It took me at least 10 spins to “get”; and still, nothing will hold a sacrificial candle to that first album for me.

I was excited to return to the El Rey- or Hell Rey- for the second time ever. It’s a pretty theater, and I found a stair to stand on close to the stage to give me a great view of the Ritual. Ides of Gemini were wrapping up their set. 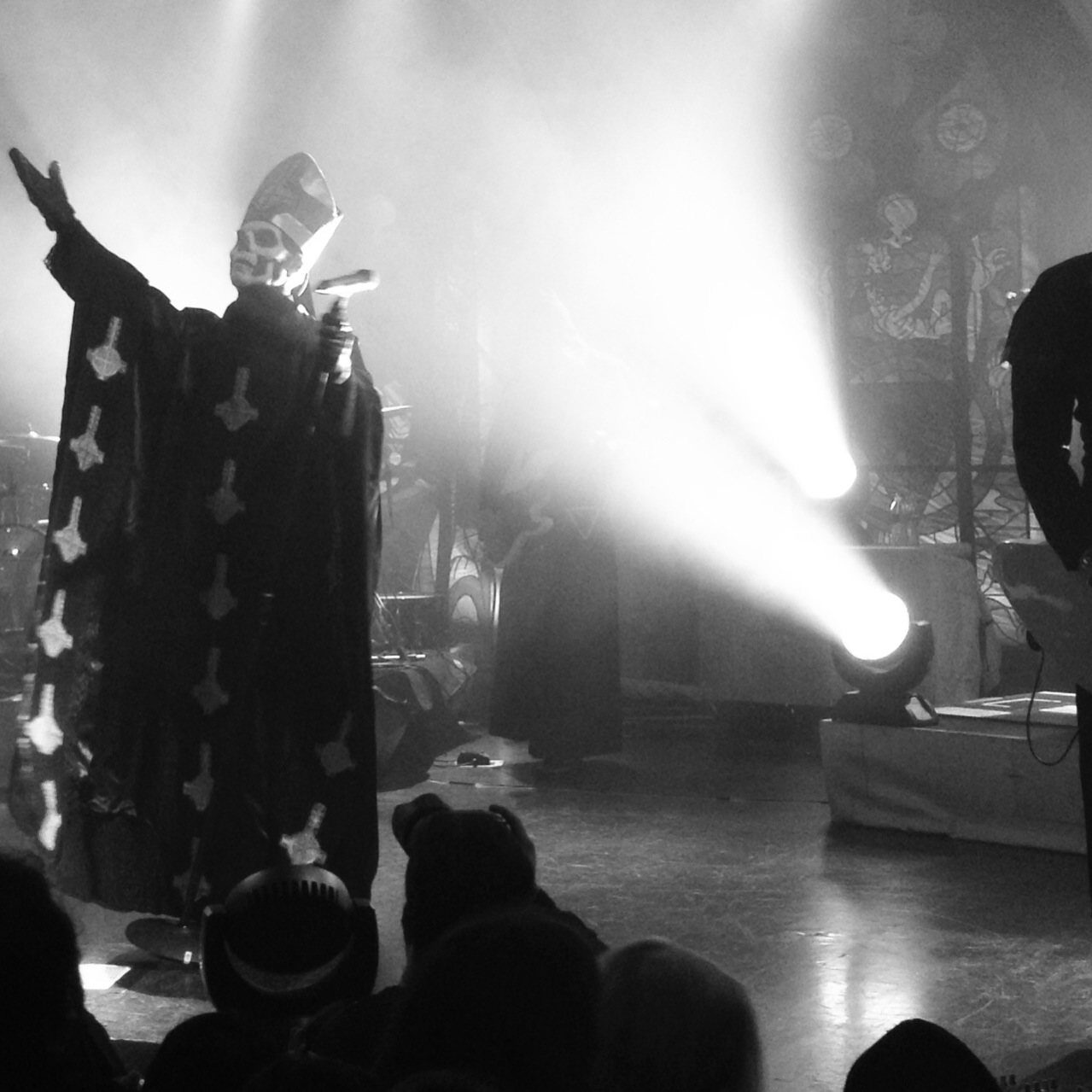 I feel like my history with this band is already kinda long, and as that great piece of music by Jocelyn Pook vibrated the room quickly filling with fog, I remembered the first time seeing them at The Roxy. A swift look around the souled-out room was pretty incredible; the band now has a serious following. The Nameless Ghouls silently and stoically took their places on the stage, instruments in hand. They launched into “Infestissumam”, and the looks on people’s faces in light of this church-sounding music was priceless. On to the second track of the new album, “Per Aspera Ad Inferi”, Papa Emeritus II (whatever) began his sermon.

As expected, the new songs sound better live. But it was the next three tracks, off the first album, that made people go insane. Like super-mental, lost their minds- ‘I don’t care if you’re a girl I’m going to push you down the steps’- crazy. Good thing I sold my soul to Papa a long time ago and maintained my stance. “Con Clavi Con Dio”…”Prime Mover”…”Elizabeth”; you can tell the effect this album has had on people. Everyone was singing along, banging their heads…from people in Destruction denim vests to chicks in dresses.

“She was an evil woman…”

Papa would occasionally address the crowd, but I couldn’t understand most of what he said. As far as I could tell, PEII means an improved costume with regard to the mask and headpiece. His voice still chills to the bone at times. The Nameless Ghouls dish out intoxicating riffs and beats, proving to be better than a nameless, faceless backing band. 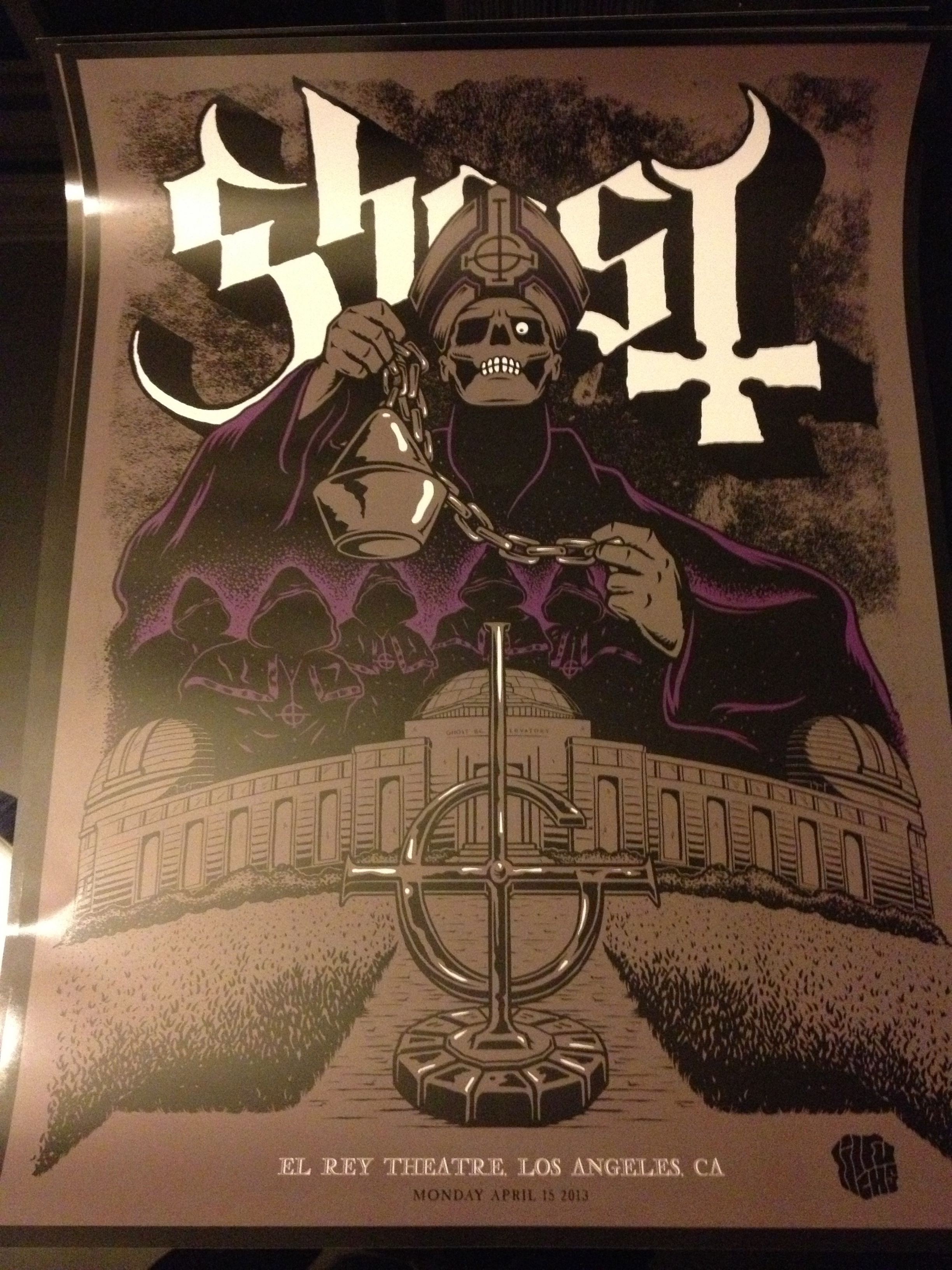 There was this one point that was totally out of character, where after “Year Zero”, going into “Ritual”, the backing vocal track for YZ accidentally began again. This seemingly broke their concentration, and those iconic first notes of “Ritual” were mangled by the guitarist. Even Satan’s crew are fallible.

“Ritual” was the song that lured me in, that made the hype believable for me, and even though it’s only been about two years, there’s a certain nostalgia I feel with it. Whenever I tell people about this band- which is often- that is the song I tell them to listen to. And I’ve turned a lot of people of different musical walks of life onto this band with that one, delicious track.

The set culminated with an encore of “Monstrance Clock”. No “Here Comes the Sun” for the new blood…

There are 666 words in this piece. 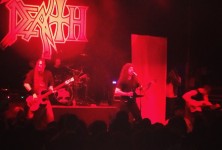 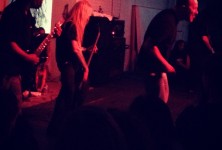