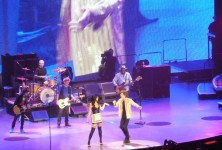 “If i could stick my pen in my heart
And spill it all over the stage
Would it satisfy ya, would it slide on by ya
Would you think the boy is strange? ain’t he strange?”

It was Thanksgiving Day 2010. My dad and I were driving west on I10, listening to Life, the audio book of Keith Richards’ biography. My mom had been gone two months.

We were on our way to see Roger Waters’ The Wall in Phoenix, a trip that my mom was going to join us on, but things just happened that fast.

At some point during that trip, we said that if The Rolling Stones ever tour again, we’d go see them together.

My dad and I aren’t very close, and I hadn’t seen him since I left Texas last August. But since music is the universal language, somehow a whirlwind roadtrip was planned around a Rolling Stones concert.

Faced with mediocre reviews of shows late last year, and extremely high ticket places, I decided to go with the band’s $85 ticket lottery system. We could end up front row or last row. Normally I would have sprung for the good seats for a concert that should have been as meaningful as this, but with nosebleeds even being triple digits- not to mention the seats I would normally get being in the quadruple digits, I decided to try my luck. We would be seeing them in the town known for pressing your luck, Las Vegas, anyway.

I will only drop that kind of money when Led Zeppelin reunites.

I have always loved The Stones. If I had to chose between The Beatles or The Stones, I would chose The Stones- even though Sgt. Pepper’s was one of my first albums. To me, The Beatles were kind of like the kid on the football team that grew their hair long senior year and smoked pot publicly at a party a couple times, The Stones were the long-haired rebel that was a “bad influence” on the football player. And Zeppelin was the new kid that showed up on the first day and changed the way the entire school thought, dressed and behaved.

At least that’s how I always thought about it.

Which brings me to the moment I opened the envelope with our tickets. The moment I had meditated on and hoped for over the past few weeks. And my heart sank as I pulled out two tickets that were close to the top and back of the arena.

There are few things in life that will turn me into a spoiled, snotty, privileged child- not having a good seat at the show is one of them. Which re-taught me a lesson that night- I should have just paid for better tickets if it meant that much to me. You really do get what you pay for in life, and I should not have taken the gamble with this one. I tried to upgrade our tickets there, but it was completely sold out. Luckily, my dad didn’t care, and the arena was set up in a way where we could still see fairly well. 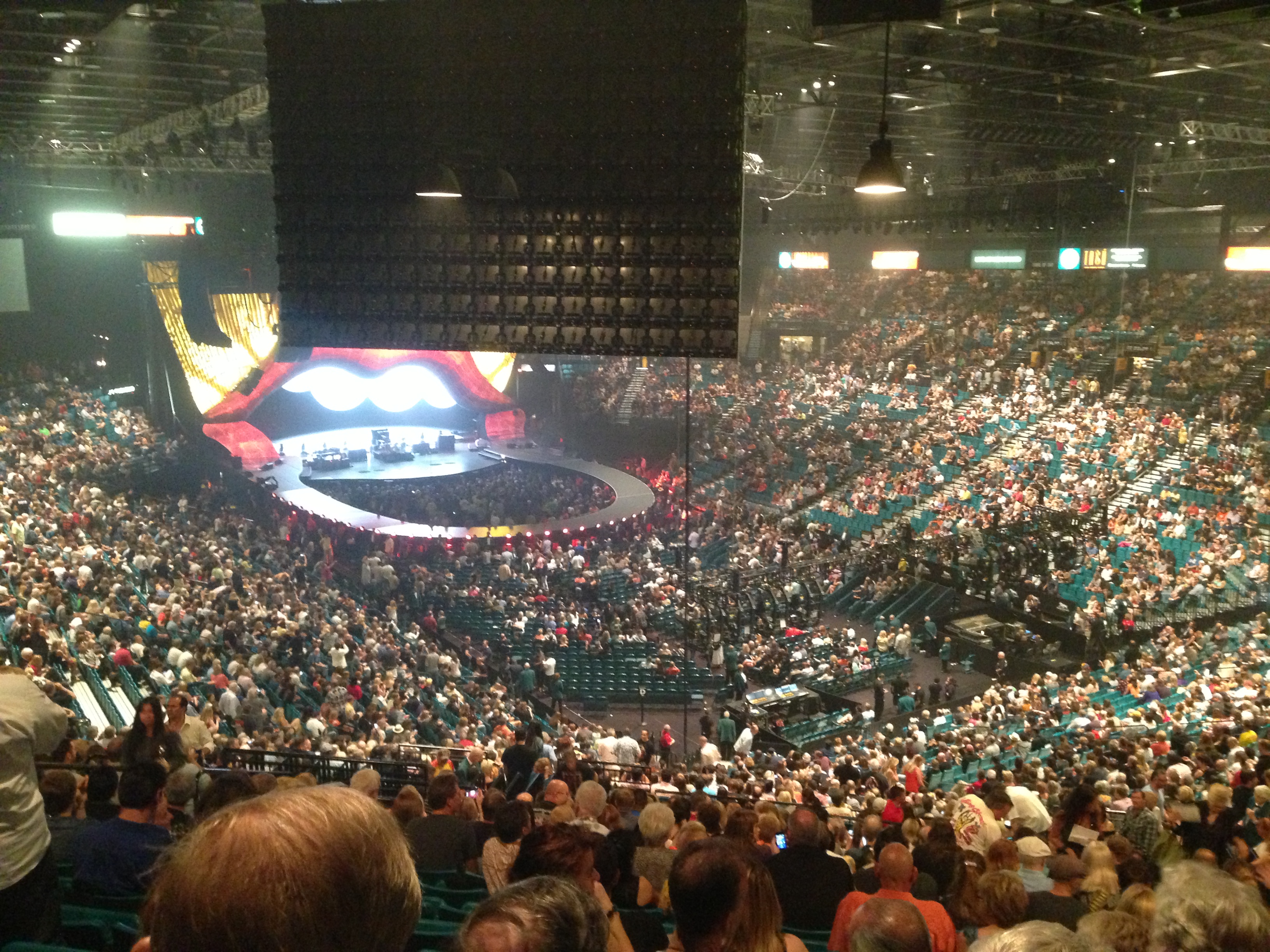 The show began an hour later than I expected- at 9pm- with no opener and no bullshit. When I do sit farther away, the crowd becomes an ancillary member of the show for me, and to see everyone on their feet singing “Get Off of My Cloud!” together was surreal. Mick Jagger’s sparkly jacket and hyperactive twitching child moves seemed to be created simply to reach out to a person like me, sitting far away. How a 69 year old man can still move like this is beyond me- he’s my dad’s age for crying out loud; many say they are performing better than they did in their early years.

Celebrating 50 years as a band, every song in the setlist was a hit. When I listen to The Stones, I think about how their words are so borderline rebellious. As a kid, I wondered if they tapped into a burgeoning rebellious culture and manifested these catch phrases themselves, or did they simply pluck these sayings from the collective consciousness and make them household sing-alongs? How many times is a Stones song quoted in a day? Ya know who creates these types of things nowadays? Rappers. Our catch phrases come from rappers today.

The Stones have had a celebrity guest on every night of the tour so far, and tonight’s would be Katy Perry dueting on “Beast of Burden”. Of course. Tom Waits would have been much more my speed. This song was also voted on by fans using social media. Hearing Mick Jagger talk about social networking weirded me out. 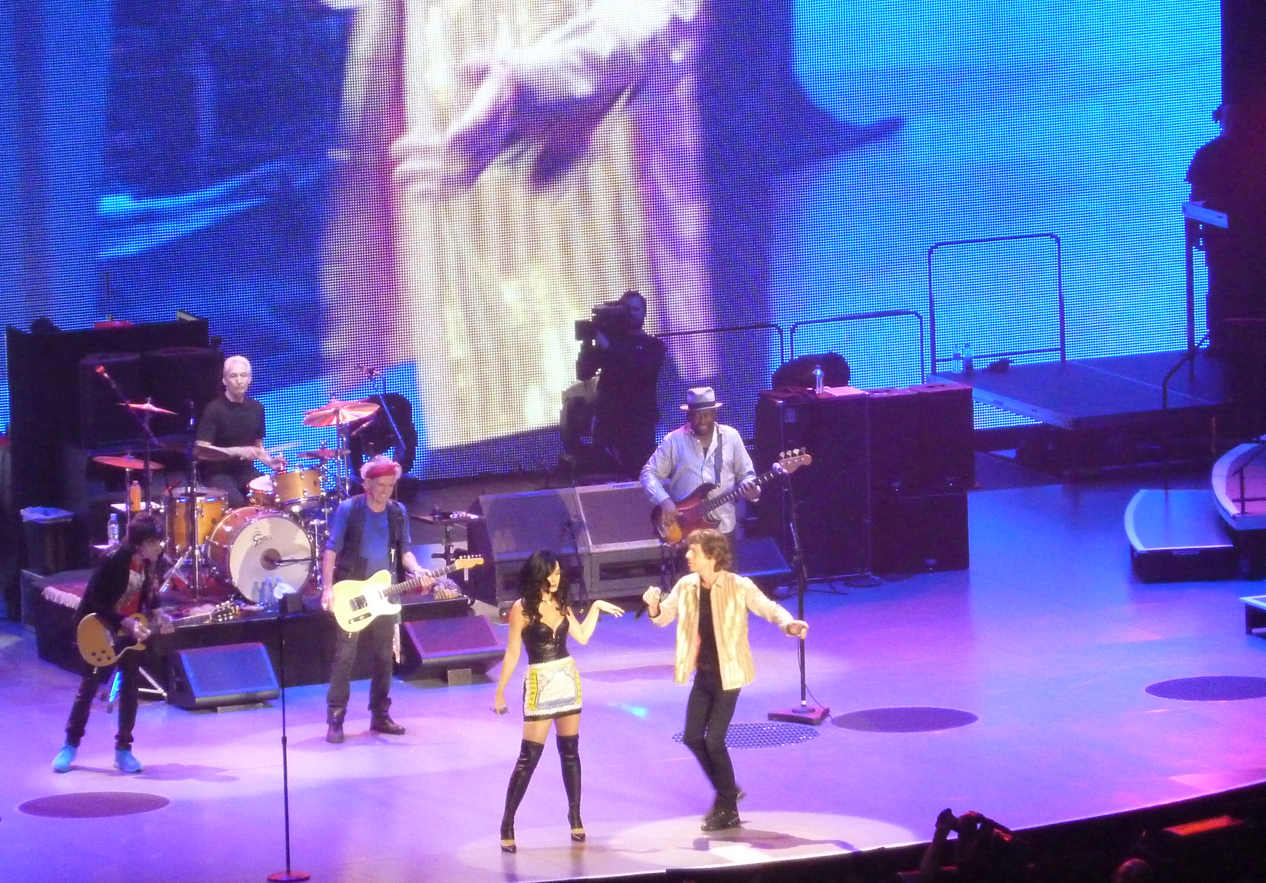 The mouth and tongue setup was cool, with the pit being inside the tongue and the outline of it being a giant circular catwalk. However, with ticket prices being that much, the production did not have a lot of bells & whistles. I know exactly where my money is going for Rammstein (up in flames), for The Wall (into giant bricks), for Madonna (costumes, dancers, etc.), for NIN (moving light pieces)…but here there wasn’t much beyond the design. Also, they did not utilize the catwalk as much as I would expect (Madonna used it for almost every song).

I loved seeing the homage reel to the artists that The Stones drew a lot of inspiration from: Leadbelly, Elvis, Little Richard…I was wondering if Gram Parsons was going to be featured. He was not.

My roadtrip to this show with my dad started in Joshua Tree. As with many things in my life, a sticky spider web unexpectedly connected many elements in this trip: from staying in the infamous death place of Parsons- The Joshua Tree Inn- to randomly catching Jim Lauderdale performing at Pappy & Harriets, to walking around the Hard Rock Hotel where we stayed in Vegas and seeing a poster for a Gram Parsons tribute show featuring both Keith Richards and Jim Lauderdale. I tripped out a little, having forgotten the Parsons/Stones connection. The Flying Burrito Bros. released “Wild Horses” a year before The Stones did (who wrote the song and gifted it to Parsons to use). 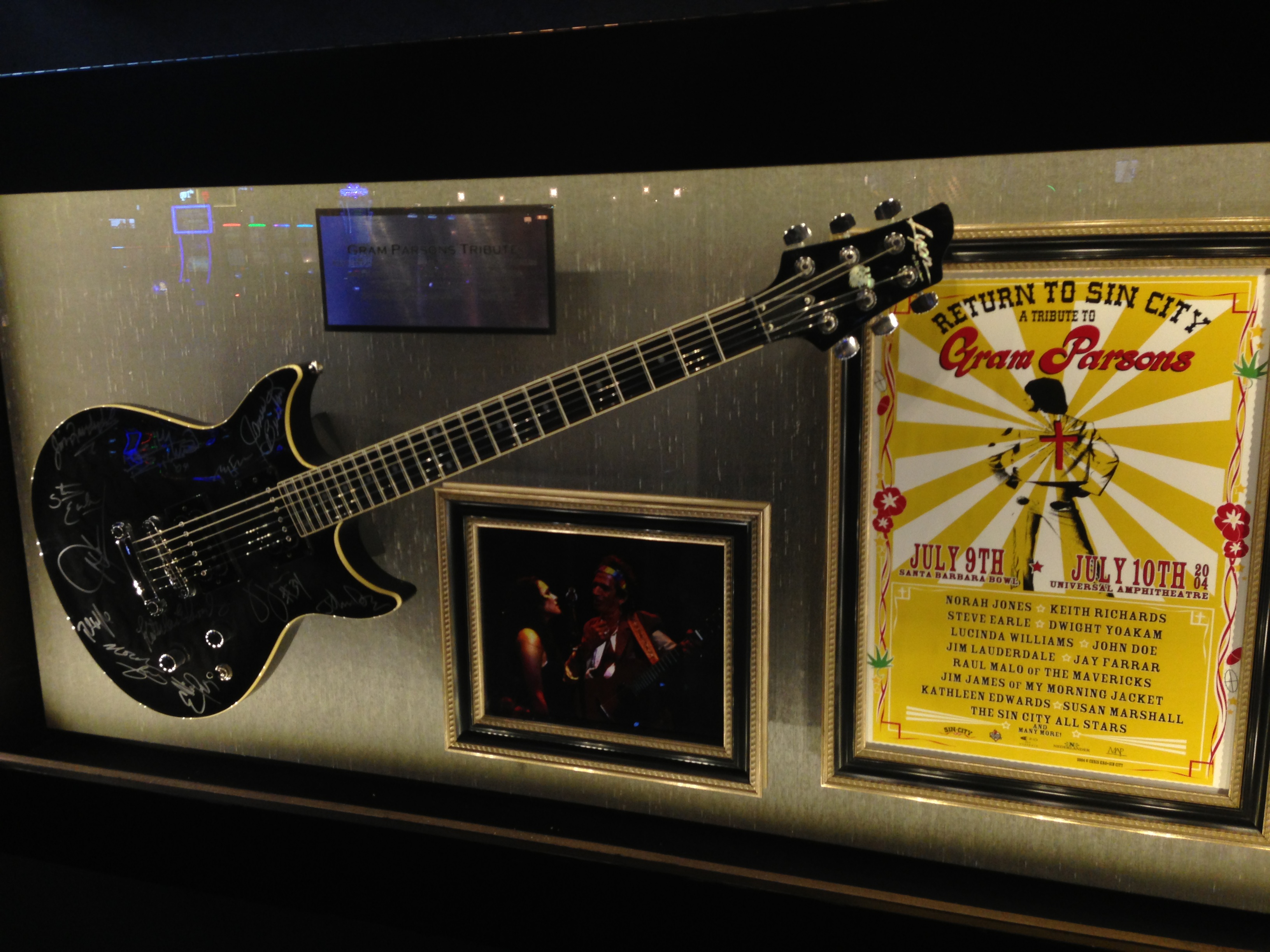 “Wild Horses” is perhaps my favorite Stones song, but it would go unplayed tonight. It reminds me of my mom. “She’s A Rainbow” and “Can’t You Hear Me Knocking” are my other favorites that were not played. It’s amazing that a band can play only hits and still leave you whining for more. But hearing “Honky Tonk Women” and “Tumbling Dice” were like, wow, it didn’t seem real, especially with an arena full of people providing back up vocals. Speaking of back up singers, the woman who joined in on “Gimme Shelter” almost stole the show. And the local choir on “You Can’t Always Get What You Want” were great to have, simply to have that part of the song be live. And all things considered, they really should have played “The Last Time”… 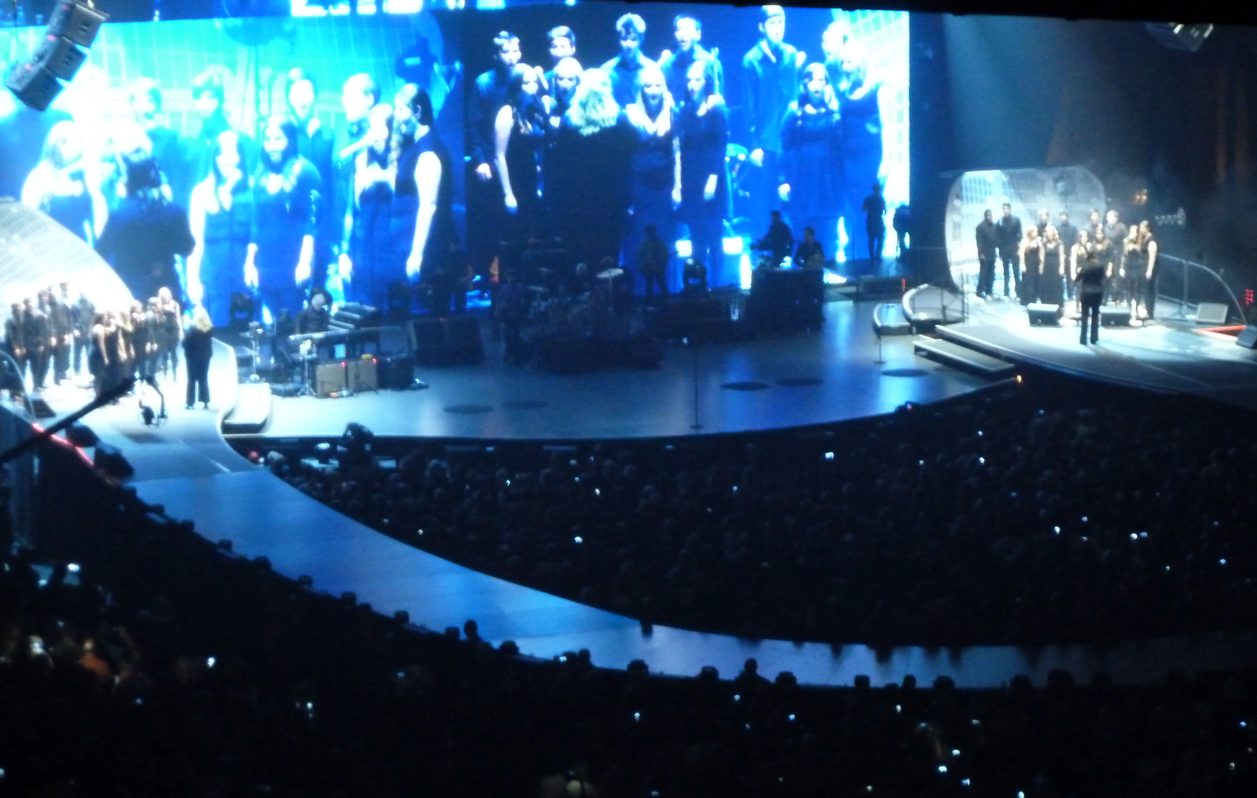 Mick Taylor joined the band for a few songs, stealing some thunder from the blue-shoed Ronnie Wood and the scarf-swathed Keith Richards. I have read a lot about The Stones, which tends to be a meandering soap opera of bedding the same women, drugs, and interpersonal tension. Taylor wasn’t a part of that (except for a bit of the latter)…but it was good to see “the band back together” on their 50th anniversary.

I have read almost everything about Zeppelin and they are still a mystery to me.

As the ubiquitous “I Can’t Get No (Satisfaction)” began, I started to think about what it meant to me to see “the world’s greatest rock & roll band”. It was very necessary.

And my dad told everyone he really enjoyed the show. 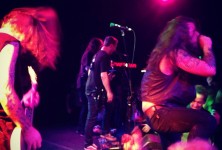 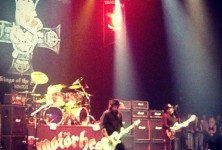