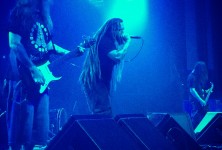 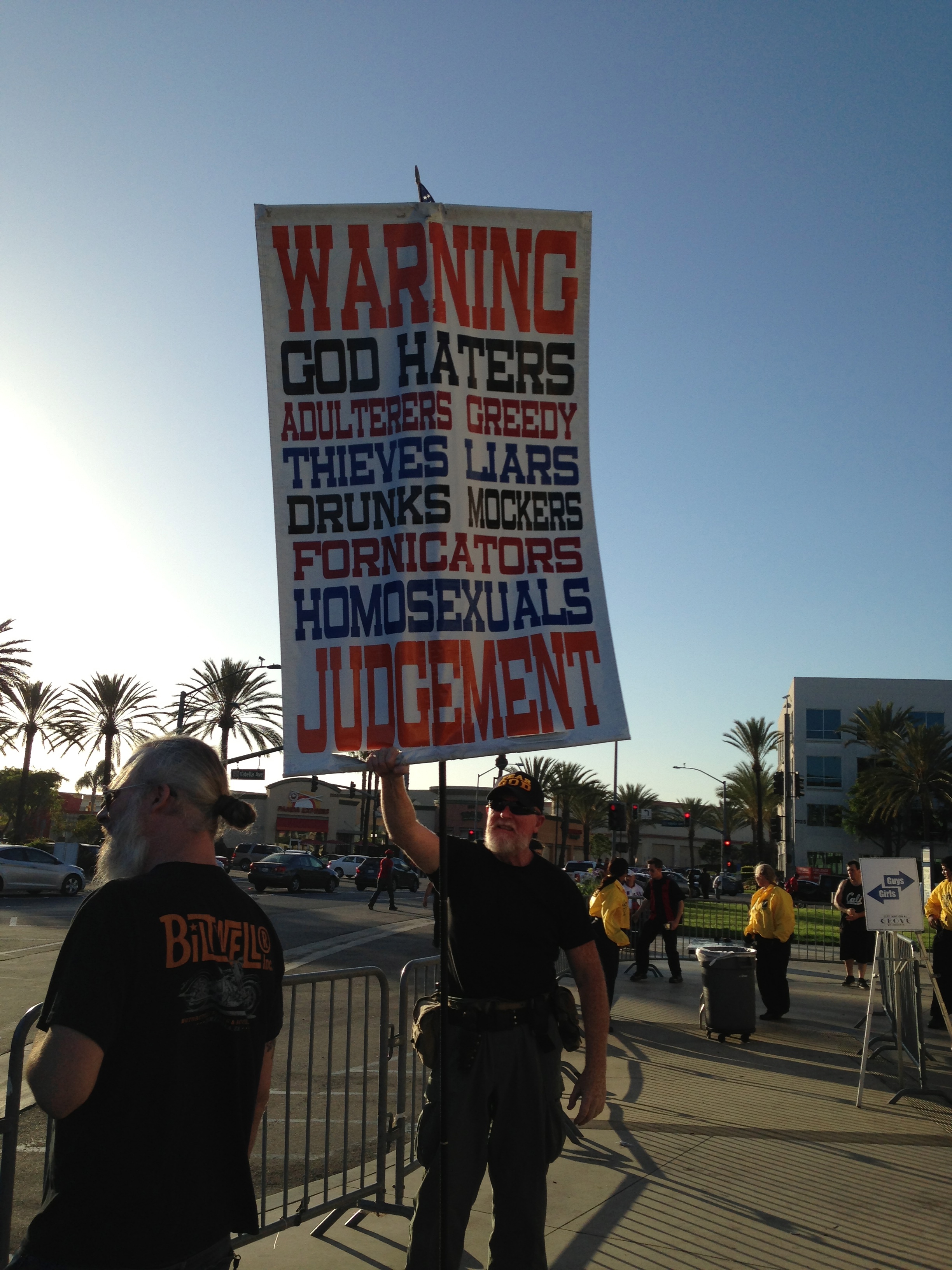 It took me two fuckin’ hours to get from Hollywood to The Grove, but I was still early. The days where I get really excited about a show have grown few and far between; but that morning I had gotten that old yet familiar tingle in my tummy that caused me to get my ass in gear and get there early. After a quick trip to will call, I waved to our lovely resident picketer: 1 vs. thousands of metalheads….good luck with your message, dude!

I figured the best way for me to just forget everything and focus on the show was to go straight to the front. As I settled into my old familiar spot, my nose caught a whiff of something vaguely familiar, just as I overheard security tell a guy, “…yeah, they throw ROOT BEER on the crowd. You can still smell it.” 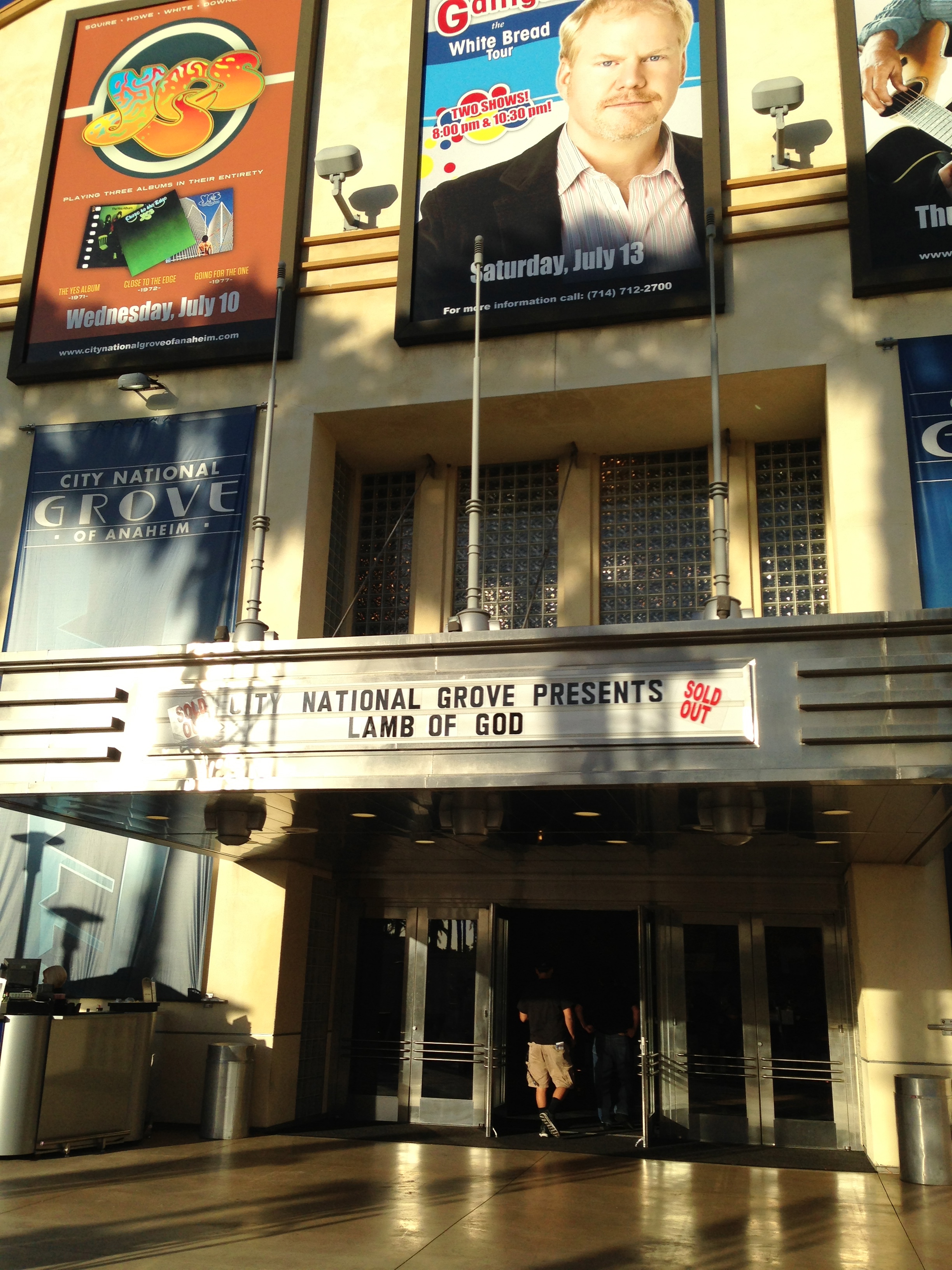 So I go, “Wait, what band throws Root Beer on the crowd?” and he says “Clown Posse” and the next thing I know I’m saying, “Oh, Insane Clown Posse….it’s actually called Faygo and it’s like Mountain Dew and really, really sticky…I got bathed in it once.”

And then I caught myself and turned away, embarrassed. 1) I just admitted to going to an Insane Clown Posse show, though it was for an “investigative journalism” piece, and lately I’ve had to think about it a lot because it’s unfortunately one of the first chapters in the book I’m working on. 2) I have become THAT PERSON at shows that corrects people and talks about how I was there at this, that and the other. UGH! 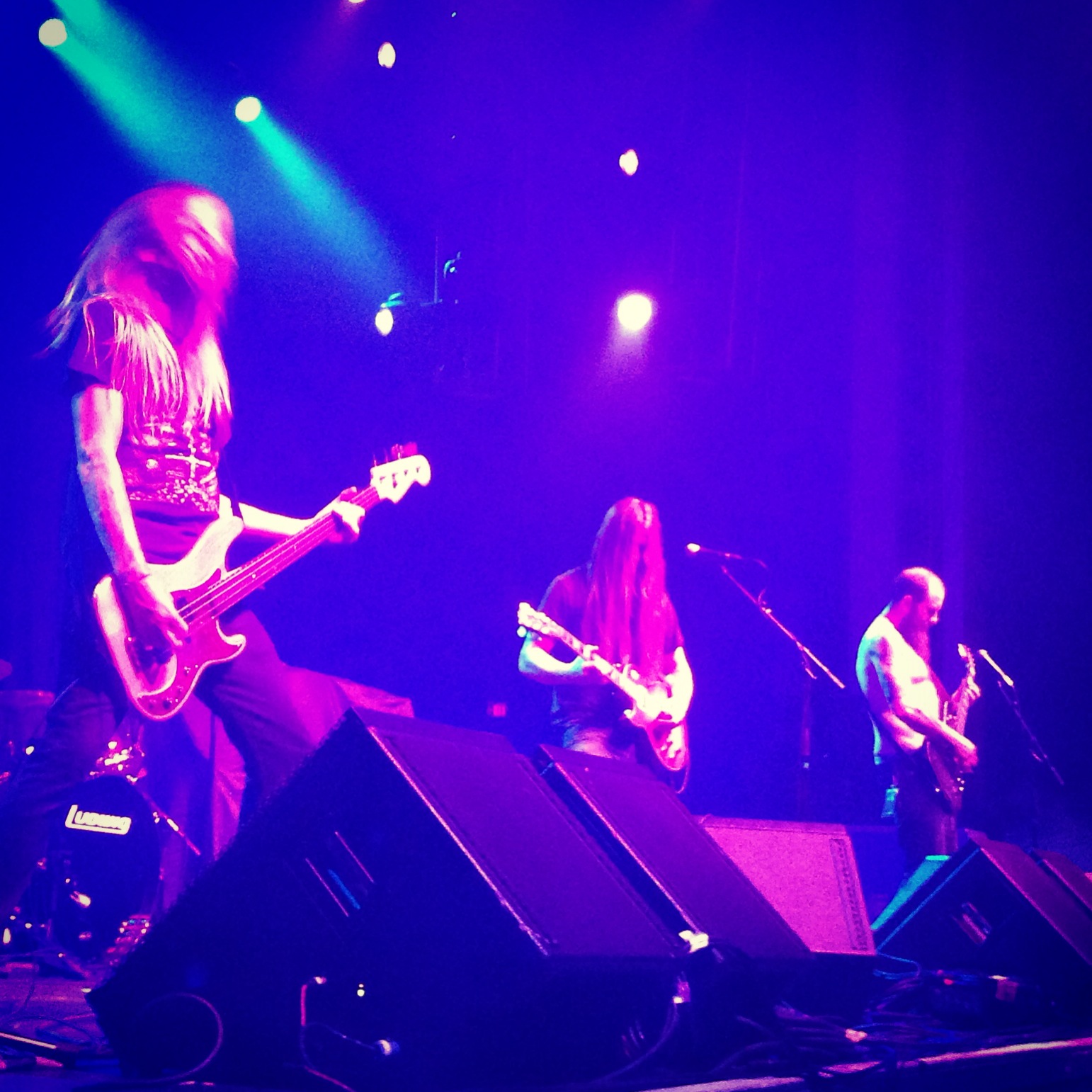 Anyway, luckily ANCIIENTS quickly came on to save the day. I always cite coming early to shows to be the number one way I discover new bands, and this was the first time I left a set going, “I’m going to go home and check out all their records” in a while. Their sound is a mingling of newer Mastodon, newer Opeth, and newer Enslaved…which , if you ever read this blog, you know is all good and well in my book. With long, meandering songs that, to an untrained ear, you often don’t know when it’s over, when the next song has started; I got into their vibe. Their sound was complex without getting boring or pretentious. It is not what I would expect an opener for this show to sound like, but I’m glad it did. Good stuff comes from Vancouver, must be something in the water. 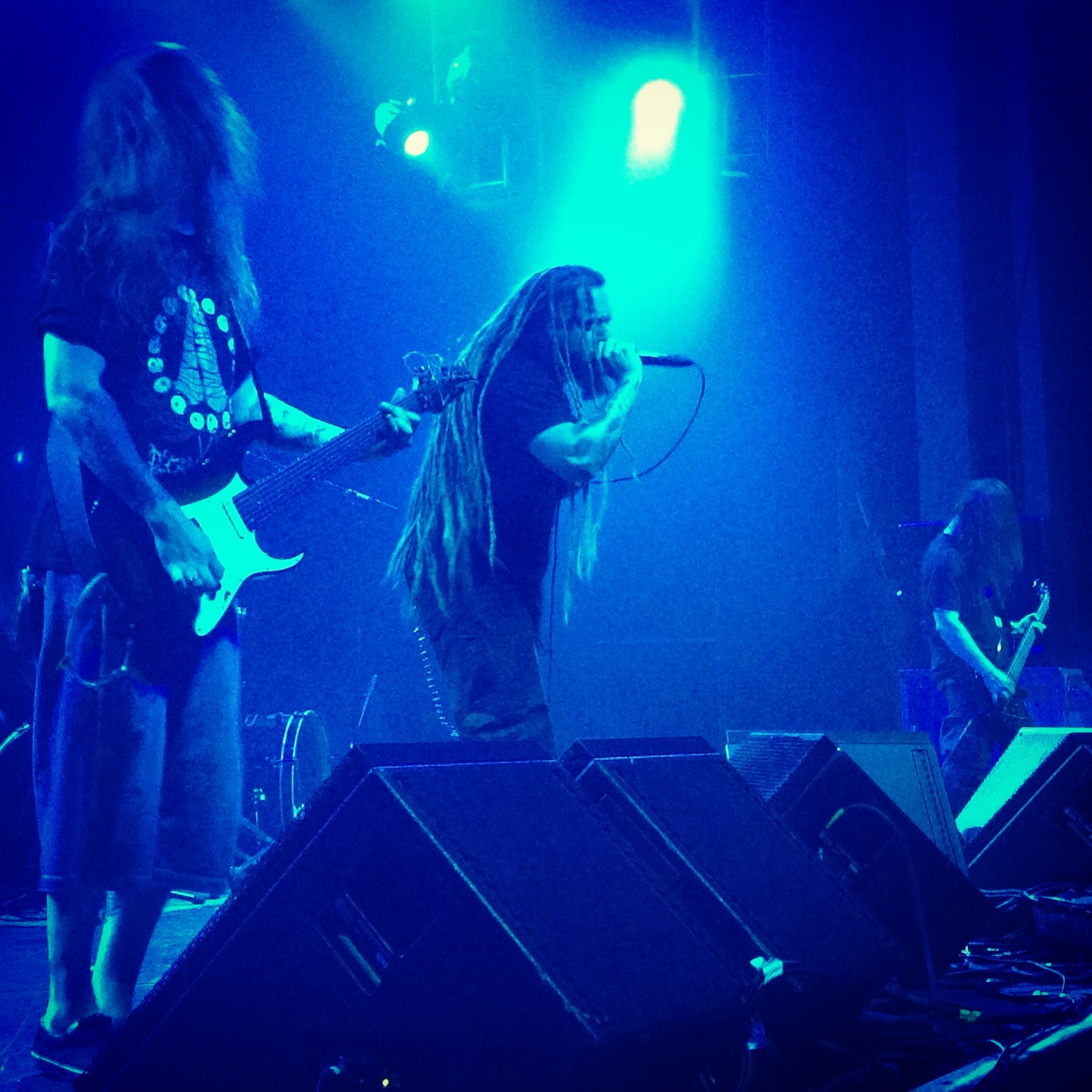 Last time I saw Decapitated there was a strange transition into Baroness, and I felt the same mind shift into their set this time around. I could feel the crowd come to life around me as the Polish metal soldiers walked out onstage. Connected only to the previous set by complex riffs, where the last set soothed, I now grooved. While Decapitated’s brand of Death Metal is as punishing as the next, it’s in the moments where they step out of the mold and let the riffs speak for themselves that define them. Which is clearly why “Post Organic”, “Day 69”, and “Spheres of Madness” rise to the top. Vocalist “Rasta”‘s dreads menacingly reach out to the crowd at times, and Vogg’s fingers work at lightning speed while he barely appears to look down at them. By the end of their set, I found myself thinking: “this would have been amazing on Barge to Hell…maybe the next one”.

As we geared up for Lamb of God, the security guard in front of me pointed to my wristband and asked what it was for. I told him I guessed it was for press, and moments later he reappeared to tell me to queue in a line because my wristband allowed me to watch from the stage. I was like, “no…I don’t think so”….and he looked at me and said “yes, watch from the stage”. Now, I don’t mean to sound weird, but I prefer watching a show from the front like it’s supposed to be experienced; the sound is terrible from the side of a stage. But, I knew it was about to get too crazy for me to handle in there and I’m recovering from a respiratory thingy and the security guard was awfully persistent, so off I went. I thought there was no way they were actually going to let me on there, but they did, and as soon as I rounded the corner to the “viewing area” I pretty much pivoted around and went back out front. It would have been cool to see one of the best metal drummers out there from the side angle but you could not see anything else, and I really try to stay far away from drummers these days anyway. 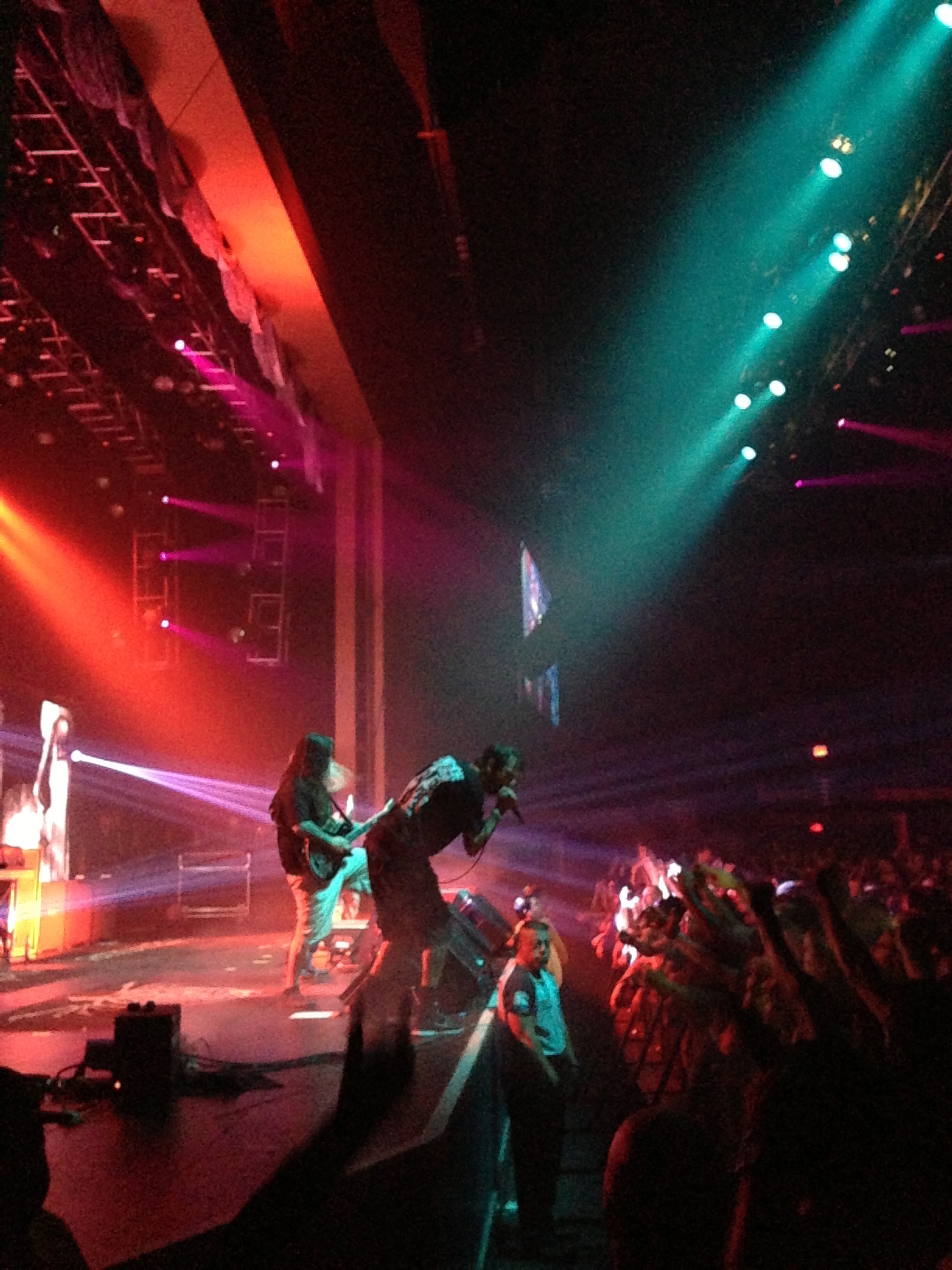 Back out front, it was like getting slapped in the face with a wet towel the way the heat suddenly rose in there. Lamb of God brought the southern humidity with them, as the band came into my view, crowned by the iconic, hunched pacing of Randy Blythe. Last time I saw Lamb of God I was dressed as Lydia Deetz in a red wedding dress and Blythe was still in the midst of all the legal horror that snagged headlines in the past year. Which is why it kinda shocked me when an exuberant fan climbed the easily accessible staircase on the far left of the stage, stumbled on stage, and dove off with ease, shortly after Blythe gave a speech about the crowd watching out for each other. No one seemed to care; I’ve seen people get punished more at shows for having a camera. 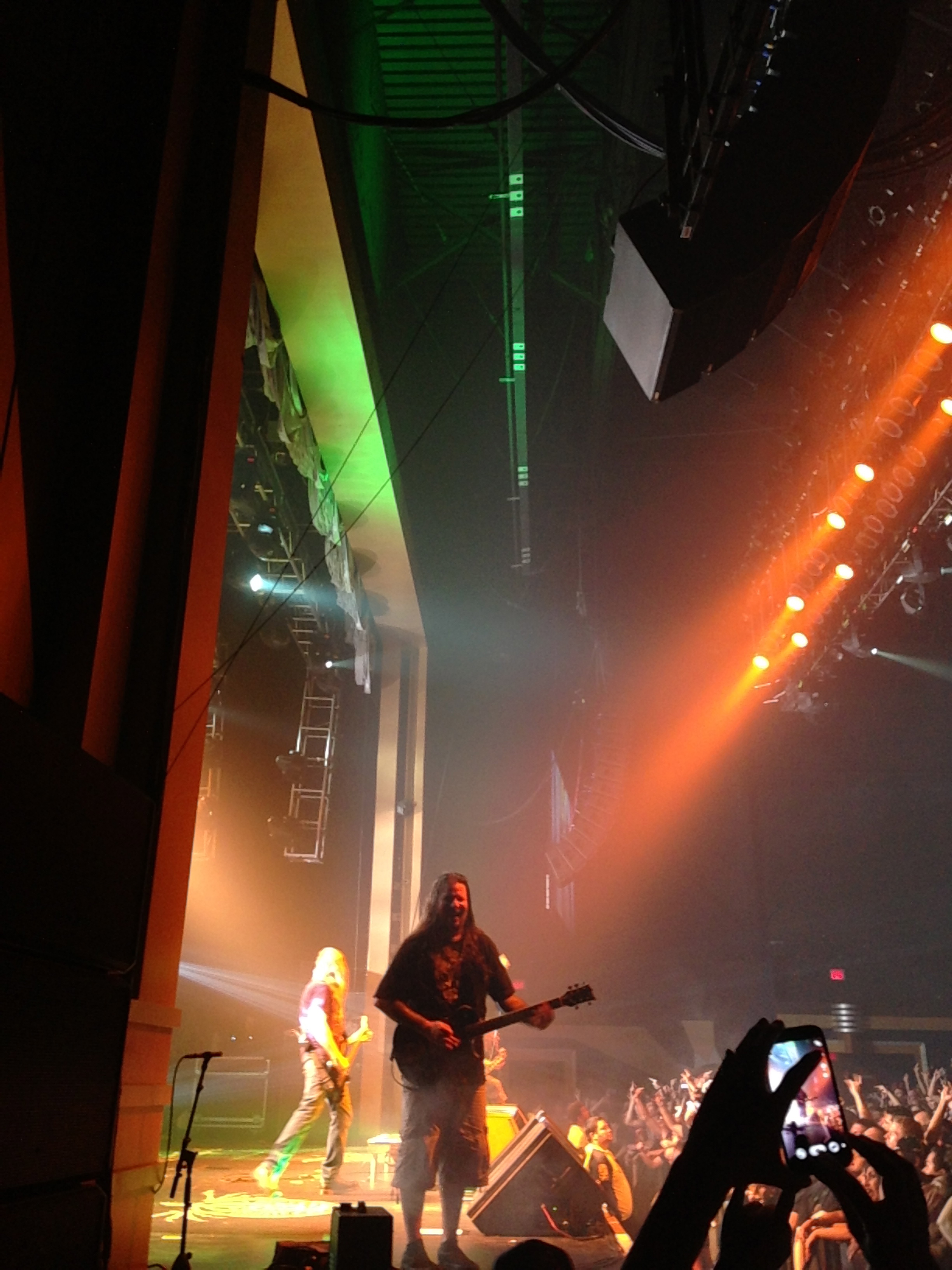 The sold out Grove was in full tilt mosh mode; I’ve been there many times and I’ve never seen the crowd all moving along with the beats and riffs to that extent. From “Walk With Me In Hell”, to “Now You’ve Got Something to Die For”, to “11th Hour”- which was dedicated to Jeff Hanneman– everyone was screaming out the words. In the encore, I watched on as guitarist Willie Adler paid some special attention to some fans in front of me. There were these two teenage boys that were SO STOKED to shake his hand and get a guitar pick. It is in moments like that that I remember the magic of the big show, the power of metal in people’s lives, and the reason why I write this site. 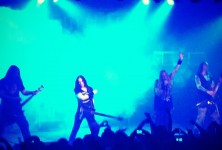 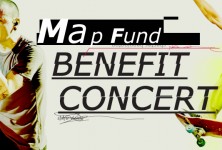