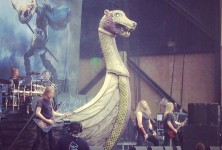 You can read my piece on Mayhem Fest on the GRAMMY site (with awesome photos), or see the unedited version below.

This would be my sixth time attending Mayhem Fest over the past five years; the annual summer event has been the place to catch emerging, current, and classic acts from all corners of the rock and metal world. It would be my first time, however, to attend the traveling festival’s kick-off date in San Bernardino, CA. An amphitheater set on grounds nestled against a mountain backdrop, this would set the stage for my loudest (I discovered I had lost a filter to my custom earplugs at the beginning of the day-BAD TIMING), biggest (this venue’s capacity far exceeds other venues I’ve attended), hottest (temperatures maxed out around 110 degrees) Mayhem experience yet.

I arrived as doors opened for the festival, at 1pm, and as metalheads descended upon the field containing the day stages and vendors, liquids purveyors tried their best to make sure everyone was hydrated. But not much into the witchy metal of Huntress did things start to become like a scene from The Walking Dead. The side-by-side stages created a relentless music schedule, and next up Attika 7, comprised of ex-Biohazard bassist Evan Seinfeld and Sons of Anarchy Hells Angel Rusty Coones, played their hard rock life tracks in front of a motorcycle. As Battlecross began, I experienced the closest thing to air conditioning I would all day: windmill headbanging. I positioned myself in front of two long-haired men who, on cue from the thrash metalers, kept me cool. If only we could have gotten the entire field to do this…think about it.

The face painted industrial metalcore band Motionless in White played to the growing crowd, who, in some combination of sun and regular drunk, began to become increasingly aggressive. I was instantly reminded that metal festivals are not a comfortable place; nor do we want them to be. The conditions mimicked the themes often painted in the lyrics of the songs played before us, and we endured it, because that’s what you do as a metal fan. You live it.

While I stood on the edge of the other sets, I next found myself elbows hooked over the rail of the smallest stage of the show for its headliners, Scorpion Child. A musical mismatch for the rest of the lineup, the counter-programing of The Child’s hard rockin’ blues grooves were a very welcome addition for all of us in attendance. As they wailed through tracks from their newly-birthed debut album, we danced and sweated along with them. The Child hail from my homeland of Austin, and I smiled a bit when between their songs I could hear the growls of Job For A Cowboy on the other stage.

Machine Head had heavily decorated their stage with their logo, but the crown jewel was the black and white polka-dotted Flying V Jackson guitar that Phil Demmel was wielding. That was one of Quiet Riot and Ozzy Osbourne guitarist Randy Rhoads signature axes, and his grave happens to be not very far down the highway. Machine Head carefully balance their theme songs for hate and heartbreak upon the crowd, and dust, shoes, and empty bottles of life-sustaining liquids decorated the sky above us.

Finland’s Children of Bodom closed out the field stages, with their symphonic thrash seeming like the soundtrack to Armageddon under the circumstances. At this point, I had seen people collapse and be carted off by medics, fans with eyes rolling back in their heads yet still throwing horns at the exact proper time while being held up by their friends, and every inch of shade cast by tree, tent, or trailer was taken up by a metalhead. Clocking in at 6 hours already, I had been running around all day, but the main stage festivities were just about to begin.

The Scandinavian invasion continued as Sweden’s Amon Amarth performed on one of the better stage setups I’ve seen in my day: a Viking ship. Growler Johan Heg, drinking horn dangling from his belt, would perch on the boat or in front of it to deliver tracks like “The Pursuit of Vikings” and the newly unleashed “Destroyer of the Gods”. The massive amphitheater was beginning to fill, and it became like a Viking pep rally in there.

One of my all-time favorite bands, Atlanta’s Mastodon, played next. This band’s music has gotten me through a lot of rough times, and, even though this was my 14th time seeing them, I would be hearing music that’s very intimate to me in the most un-intimate of settings. Heavy on tracks from last year’s release, The Hunter, I was air-guitaring from afar, lip-synching the lyrics, and laughing at others in the crowd who were doing the same (though much more skillfully than me).

The sun was setting on a fluorescent pink sky, and I started to feel pretty woozy. The sun had finally taken it’s toll, and I felt like I’d taken a 5 Finger Death Punch before the Vegas guys had even hit the stage. But having seen them and Rob Zombie many times before, I’m certain that their big rock shows thrilled those that lasted until the final throes of Mayhem. 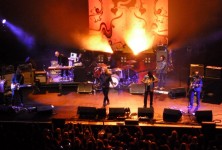 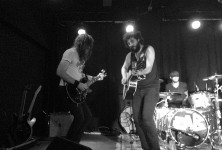