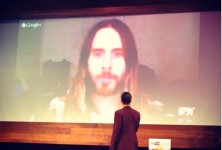 The GRAMMY week staple, Social Media Rock Stars Summit, was morphed into a new event this year deemed GRAMMY Connect. Â Out at the YouTube Space LA in Playa Del Rey, the theme of this year’s event was discovery. Â We’ve moved on from the themes of earlier years of what is out there and why, and how to use it…but now we are onto figuring out what to do with all of the information and access that we have.

Rather than a moderated panel discussion with founders of key social media and high profile end-users, this event featured presentations given by the key figures in music technology. Â First up was Eric Davich, co-founder of Songza. Â I really connect with Songza’s philosophy of mood and situational-based playlist creation. Â I’m not a user of the OG in music streaming recommendation services- Pandora- so his explanation that there is a man behind the machine in their ‘concierge’ panel of 50 music specialists- including DJs, producers, musicologists, and more. Â “People listen to music to make what they are doing or feeling better”, Davich said. Â He also went on to discuss how their ads are designed not to “piss you off”; they are not an interruption. Â The case study was a Mr. Clean playlist to urges you to “rock out with your mop out”. Â Tweets were pulled into the presentation to show reactions to the service by end users. Â Davich said that Songza’s goal is “to be your best friend app who always knows what you need”. Â To finish, he stated, “your context, not your content, is king.”

After one failed attempt, we were able to have a Google Hangout with Jared Leto 30 minutes before he took the stage in Monterrey, Mexico, who was on the first Social Media Rock Stars panel, as the host for the night, MTV’s Quddus, engaged in a discussion with the 30 Seconds to Mars frontman about their recently released documentary, Artifact. Â 30STM went through a very public struggle with their former label EMI, who sued them for 30M dollars, and this documentary covers this as well as the making of their latest album. Â  While it was difficult to understand through the connection, Leto commented on today’s music landscape deeming it unnecessary to have a label.

The next presentation was from Alex White, CEO of Next Big Sound. Â The title of White’s presentation was “Emergent Intelligence”. Â The consumer research analyst in me drooled over the aggregation of data from all of the places to discover, follow, stream, and share about music. Â Some of the stats: 6 billion new fans were added across major social networks. Â There were 223 billion new song streams. Â 90.7% of artists with an online presence are deemed ‘undiscovered’, with mega-successes coming in at 0.2%. Â Next Big Sound serves as the new A&R; they are able to pick the next hit artists with great accuracy using the trajectory of data on an artist. Â Lorde was given as an example.

Up next wasÂ Whitney-Gayle Benta,Â senior vice president, Â music and talent, of Sean Diddy Combs’ Revolt TV. Â Benta referred to Revolt TV as being a “network that celebrates music curation and discovery”. Â While straying from a formal presentation, Benta gave several anecdotal stories of friends recommending artists that would go on to be huge, like Lady Gaga and Robin Thicke.

The last speaker for the night was Scott Vener, music supervisor and CEO of Musaic. Â Vener was interviewed by Quddus in a low-key chat about being a music supervisor (one of my dream jobs) and his process of music discovery…which isn’t much of a process. Â “I just know what I want and when I find what I like I share it with people.”

With an In-N-Out food truck feeding us and Mayer Hawthorne as the DJ for the night, the room was abuzz after the presentation as the plugged in attendees put down their devices and spent a little time connecting in the old fashioned way. 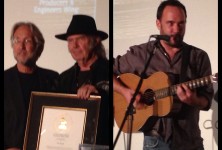 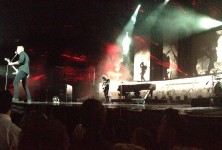