From Joan Jett to Jimmy Page, it is time to close the doors on this 8 year adventure.

In it’s simplest form, it was a blog about going to see live music. At it’s most complex, it was about my life through the lens of live music. It captured the feeling of being at nearly every major hard rock and metal tour for over half a decade. But it also happened to chronicle life’s ups and downs, the dawn of social media and music, and, what ultimately lead to it’s demise- the “jadening” of a music fan. Somewhere along the way, I got too close to the music and it lost it’s magic. And I always said when it started to feel like work, I’d stop doing it.

It was a lot of work, but it was also the most fun I’d ever had in my life. Sometimes the stuff that happened as a result of this blog feels like it happened to someone else. Back in the beginning, when it was just show posts, Top 10 Lists, and MySpace interviews… there was the excitement of being a part of something new, forging a path. Then when it took the leap to video, and I started experimenting with social media- things really got interesting. Remember how AWESOME it was to follow people from bands you admire and read their thoughts directly? And you could reply to them and they might actually read it?? I can remember the moment when I took my first phone photo of a show and posted it to twitter; I thought “who the fuck is going to want to look at a blurry photo of a show that they’re not at?”. Fast forward to now and apparently- everyone. In fact, that’s part of why this all lost it’s luster; I can’t stand going to shows anymore where everyone’s phones are in the air the whole time. At least when I did it I took a photo or two and then put it away. And the whole celebrity social media thing- it’s so curated now that it’s annoying. The experience has changed- even since 2007! It’s no longer the immersive experience I used to wallow in; it’s not exciting anymore.

But along the way, I got to realize my dreams- I got to pretend like I was Duff or Kennedy or Riki Rachtman, the MTV VJs I grew up with. It was fun! But it was also a lot of work for one person. I kept putting my professional career- the one that made money so that I could keep up my blog- in a position where I wasn’t moving forward. This year, I turned 35- and I woke up to the realization that I couldn’t do this forever. I couldn’t keep up with the insane schedule- I slept 4 or 5 hours a night for 5 years! There was a brief period where I tried to find a new home for my writing- something local to LA or someone else’s blog- but I never found that new home. And I was also afraid of becoming too old for this.

You see, I encountered a lot of sexism while doing this. I grew up in the gun industry, then worked in the video game industry- so in a lot of ways I’m used to it; but this was something different. You can go on my YouTube channel, or other places on the internet, and see the hateful things people would say about the way I look or speak. I took it for a long time; but I’ve reached a point where I don’t really want to hear it anymore. It really affected my confidence and self-image for awhile. Perhaps this was because this was a venture that was fully run and created by me that made me take it more personally; but ultimately- I put myself out there, and I did not like a lot of what I got back. There were some really nice notes that I would get from time to time, and I did meet a lot of friends throughout this journey.

I’ll never forget all that happened from 2007-2015; probably because I documented it all too well. Flying all over the place for shows, waiting in line for hours to be up front, staying up all night editing video interviews, putting myself in physical danger at times… perhaps I would have done it without the blog. I think my life got amplified for a while because I was on a mission to document everything, experience everything! I burned the candle at both ends.

But, at the end of the day, it was about me, the music, and the feeling I got by writing about it. And now I’m on a quest to get that back… only this time, I won’t be sharing it.

So, after nearly 750 music adventures, it’s time to say goodbye, friends and foes. And to take it full circle, here are my top 10 HRC memories… today at least:

1. When I danced on stage with Iggy Pop, and watched someone almost get murdered

2. When I interviewed everyone at the 6th Annual Golden Gods Awards

3. That time I was Front row at The GRAMMYs with a bunch of my favorite bands

4. That time I went on a Caribbean cruise with the world’s most extreme bands

5. That time Trent Reznor scared me in an airport

6. The one show I thought I might die at

7. The Velvet Revolver piece that turned people on to my blog

8. It was not the best or worst show I’ve ever been to, but it’s one I think of when I remember the period of time where I just went to see everything that is considered shocking

9. Undercover at an ICP show 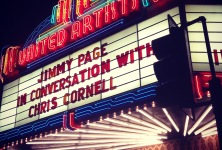